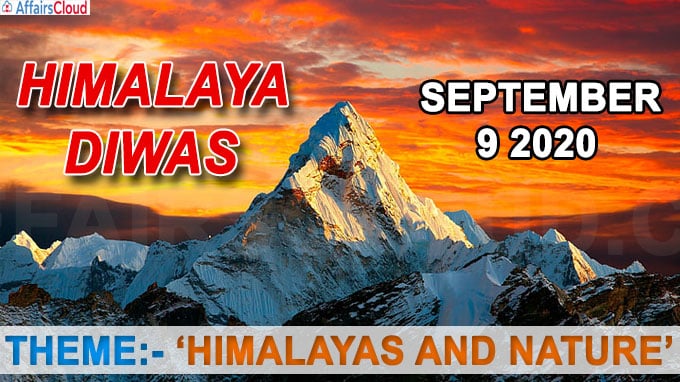 Himalaya Diwas or Himalaya Day is annually celebrated across India particularly in Uttarakhand on 9th September to create and spread awareness on the conservation of the Himalayan Ecosystem.

The Vice President of India, M.Venkaiah Naidu participated in a webinar and called for an active participation of the youths and citizens to make the conservation of nature as a peoples movement.

i.An initiative was started in 2010 by a group of environmentalists and activists to celebrate Himalayan Day to spread the message that for sustainable development and ecological stability for the Himalayas must be as unique as the Himalayan ecosystem itself.

ii.In 2014, Chief Minister of Uttarakhand, Harish Rawat accepted the proposal of Ajay Bhatt, opposition party leader and declared the 9th of September of every year beginning from 2015 will be observed and celebrated as the Himalaya Diwas.He also announced that the day will be celebrated by the Government of Uttarakhand from 2015.

i.As a part of the Himalaya Day celebration a rally from Gandhi Park to Dunga House at Dehradun was organised.

ii.Various rallies and webinars were organised across Uttarakhand to mark the Himalaya Diwas.

iii.Workshops were organised to address the environmental and social issues in the Himalayan region.

Vice President on the Webinar on Himalaya Day:

i.Vice President of India, M.Venkaiah Naidu highlighted the works of various government programmes for the conservation of  Himalayan ecology like ‘National Mission for Sustaining the Himalayan Ecosystem’ and ‘SECURE Himalayas’.

iii.He also focused on the hydropower potential of the Himalayas, which can be a source of clean energy and reduce the carbon emissions.