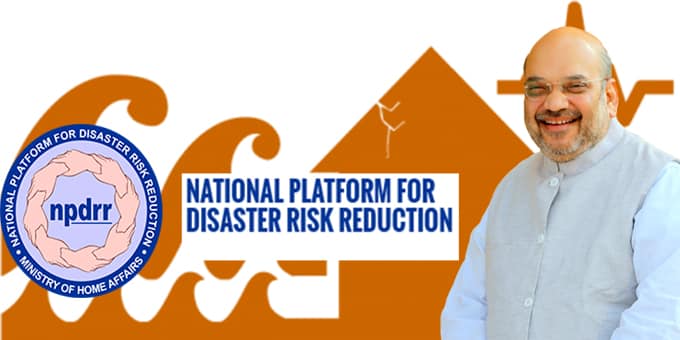 i.NPDRR’s vice chairpersons will be the minister of state in-charge of disaster management in the home ministry & the vice-chairman of the National Disaster Management Authority (NDMA)

iii.The minister of each state government & union territory in charge of disaster management, a member of the state disaster management authority, mayors & municipal commissioners  of Delhi, Mumbai, Kolkata, Chennai, Bangalore & Hyderabad, of these cities will also be the  members.

Gist about NPDRR
The Government of India has established a multi-stakeholder National Platform for Disaster Risk Reduction in reference to Government’s Resolution No.47-31/2012- DM-III dated 26th February 2013.

To review the progress made in the field of disaster management occasionally.

To advise about the coordination between the central & state governments.

To evaluate the extent & means by which the disaster management policy has been implemented by the central & state governments, & other agencies concerned.

About NDMA:
On 23 December 2005, NDMA was established through the Government of India by  the Disaster Management Act. The purpose of forming is to build a safer & disaster resilient India through holistic, proactive, technology driven and sustainable development strategy
Headquarters– New Delhi, India
Chairman– Prime Minister Narendra Modi