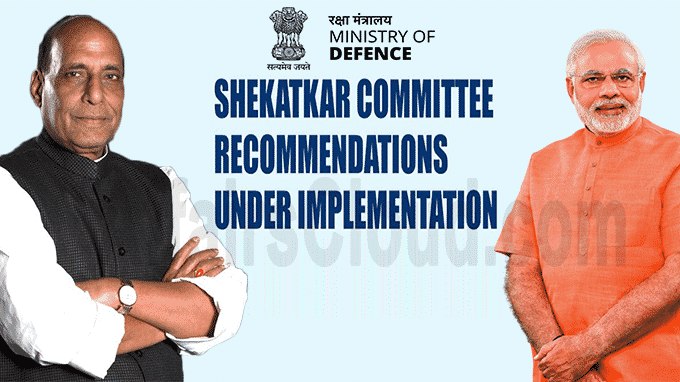 On May 18, 2020 Government has accepted and implemented 3 important recommendations of Committee of Experts(CoE) under the Chairmanship of Lieutenant General D B Shekatkar (Retd) relating to border Infrastructure so as to speed up road construction, which leads to socio-economic development in the border areas.

i.In relation to creating border infrastructure, the Government has implemented the CoE’s recommendation  to outsource road construction work beyond the optimal capacity of the Border Roads Organisation(BRO).

ii.Aim- To bring in  private sector road construction agencies & take the  load off a heavily overstretched BRO which is struggling to maintain the existing network of borders roads and highways & also to build new roads to areas that have remained outside the road network since independence.

iii.In order to ensure oversight, the government has made it mandatory to adopt & adhere to the Engineering Procurement Contract (EPC) mode to execute all works that  cost more than Rs 100 crores.

i.Other recommendations are in relation to introduction of modern construction plants, equipment and machinery implemented by delegating enhanced procurement powers from Rs 7.5 crores to Rs 100 crores to BRO, for domestic and foreign procurements.

iii.The BRO is also introducing advanced new technologies to speed up construction, such as precision blasting, use of geo-textiles for soil stabilisation, using cementitious base for pavements and plastic coated aggregates for surfacing.

iv.There is a significant improvement in the speedy financial closure of works with  the empowerment of field officers through enhanced delegation of financial and administrative powers.

i.Completing land acquisition and obtaining statutory clearances such as forest and environmental clearance will be prerequisites for approval of Detailed Project Report (DPR) for a new road.

ii.Further with adoption of EPC, it is mandatory to award work only when 90% of the statutory clearances is obtained, implementing the recommendation of CoE in regard to obtaining prior clearances before the commencement of the project.

The Shekatkar Committee was set up by former defence minister Manohar Parrikar in 2016 to improve combat capability & rebalance defence expenditure of the Armed forces for better teeth-to-tail ratio. The Committee submitted its report in December 2016.

What is the tooth-to- tail ratio?

It is a military term that refers to the amount of military personnel it takes to supply and support (tail) each combat soldier (tooth).