The south-west and north-east monsoon, are the principal features in the meteorology of India. Temperature differences among the vast Indian Ocean, Bay of Bengal and Arabian Sea on one side and the India subcontinent with the Himalayan wall on the other side form the basis of the monsoons. 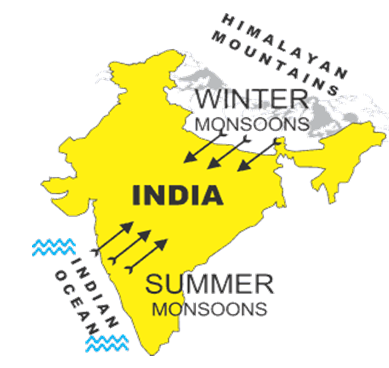 The wind divides into two branches. One part is over the Arabian Sea and the other over the Bay of Bengal. The Arabian Sea branch causes heavy orographic rain on the western slopes of the Western Ghats. 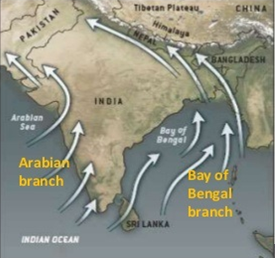 The Bay of Bengal branch

The Bay of Bengal branch enters Bangladesh, West Bengal, and Orissa. This wind goes to meghayala and trapped into the tunnel shape mountains. This is the reason Mousinram, and Cherrapunji receives the maximum rainfall

From there the wind turns to the left and passes over the plains of Northern India. The rainfall gradually decreases to the west.

The Arabian Sea branch enters into west coast and plains of west and northern India. Rainfall  in these areas is much less than that in Assam or in Bombay. Rainfall lasts from June to September.

During the winter (October to March) the continental interior becomes much cooler than the surrounding oceans; the wind direction is thus reversed, blowing from the continental high pressure to the low pressure over the oceans. This creates the NE monsoon over India, which is generally a cool and dry wind.