As air masses move around the globe, so air pressure changes. Areas of high pressure are called anticyclones, whilst low pressure areas are known as cyclones or depressions. Each brings with it different weather patterns. Anticyclones typically result in stable, fine weather, with clear skies whilst depressions are associated with cloudier, wetter, windier conditions. The law governing here known as Buys Ballot’s law, states that in the northern hemisphere winds move in an anticlockwise direction around the centre of low pressure and clockwise around centers of high pressure; in the southern hemisphere the reverse is true Difference between Cyclone and Anticyclone 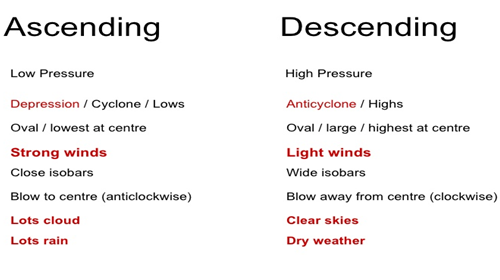