The solar system consists of the Sun; the eight  planets, more than 130 satellites of the planets, and a large number of small bodies 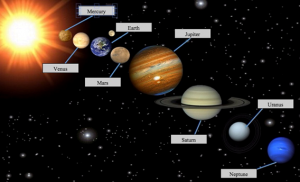