On January 7, 2020, The Indian Space Research Organisation (ISRO),the space agency of the Government of India (GoI), has planned to launch a new satellite series called “Indian Data Relay Satellite System (IDRSS)” for seamless communication for India’s first manned space mission ‘Gaganyaan’, which have a schedule to take off in 2022. 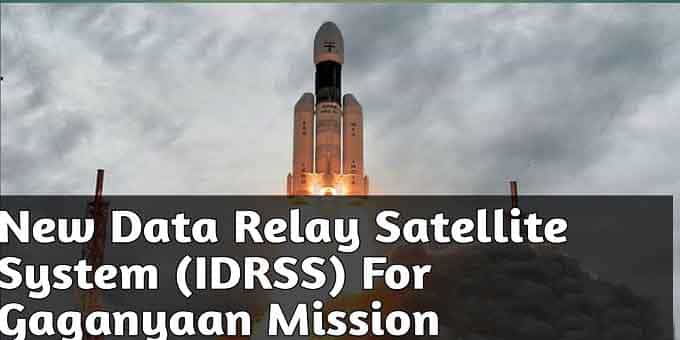 i.IDRSS For Gangayaan Mission:
It consists of 2 satellites, which will be deployed in phases. The 1st one planned to launch by the end of 2020 to track and be constantly in touch with Indian satellites, mainly with those in low-earth orbits (LEO). Then the 2nd IDRSS satellite will be launched in 2021, which will set the platform for the main mission launch in 2022.
These 2 satellites of the 2,000 kg weight will be launched on the Geosynchronous Satellite Launch Vehicle (GSLV) launcher to around 36,000 km away from earth’s orbits that covers a third of the earth. Both satellites will provide near-total tracking, sending & receiving of information from the crew round the clock (24×7).

ii.Advantages:
With the IDRSS satellites in place, the crew members will get benefit by staying in touch with mission control throughout the travel. In the future, it will play a vital role for ISRO as it’s future expeditions is aimed with advanced LEO missions such as space docking, space station, as well as distant expeditions to moon, Mars and Venus, etc. With this launch, ISRO will join other countries like the US (United States) and China for setting up its space travel satellite communication system.

4 Astronauts identified for Gaganyaan
According to the ISRO chairman Dr Kailasavadivoo Sivan, 4 astronauts have been selected from the India Air Force (IAF) for India’s first manned space mission ‘Gaganyaan’, a Rs 10,000-crore project.
The training will be provided to these astronauts in Russia in the third week of January 2020 after the medical test.

i.In its maiden crewed mission, ISRO will send 3 astronauts for up to 7 days to orbit the Earth at an altitude of 400 km.

ii.Along with Gaganyaan, work on the Chandrayaan-3 mission of about 600 crores is also going on. The preparations are underway to launch Chandrayaan-3 in 2021.