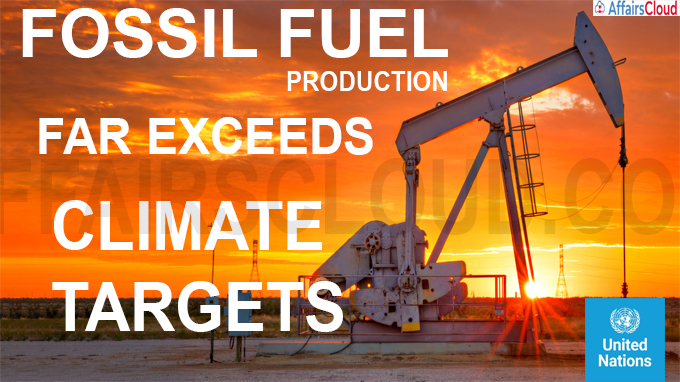 In accordance with the report titled “The Production Gap, 2020” produced by the United Nations Environment Programme (UNEP) the world is planning to produce more than double the amount of Coal, Oil and gas by 2030.It is planning an average annual increase of 2% for coal, oil, and gas production in 2030 as against the requirement of fossil fuel reduction by around 6% per year between 2020 and 2030 to attain warming target of 1.5°C.

Reminder: Under the 2015 Paris Agreement, member nations have committed to a long-term goal of limiting average temperature rise to below 2°C above pre-industrial levels and then further limit to 1.5C.

–In order to be at par with the Paris Agreement, between 2020 and 2030, global coal, oil, and gas production would have to fall annually by 11%, 4%, and 3% respectively but the World governments are moving towards the opposite direction.

–The Covid-19 pandemic is expected to cut production in 2020 by 7%, but still it does not impact the total production expected by 2030 as the government stimulus and recovery measures are again boosting its production.

–G20 (Group of Twenty) governments also committed $233 billion in COVID-19 measures to sectors responsible for fossil fuel production and consumption. It is more than the clean energy ($146 billion) commitment.

— According to Climate Action Tracker, which measures government climate action against what is needed to limit global temperature rise, current policies can result to a 2.9°C temperature rise this century.

Other Producers of the Report:

i.On the sidelines of the UNGA-75 session, on September 25, 2020, a high level Roundtable on Climate Ambition was hosted by the UN Secretary-General Antonio Manuel de Oliveira Guterres during which Bihar Chief Minister Nitish Kumar was the only leader from India to participate.

ii.On 8th October 2020, Britain’s Prince William, Duke of Cambridge along with Broadcaster and Naturalist Sir David Attenborough launched the Earthshot Prize, a new environmental prize with an aim to encourage change and support to repair the planet in the next 10 years (2030).