Fortune magazine has named the co-founder and CEO of the biggest social networking site Facebook, Mark Zuckerberg as Business Person of the Year, 2016.The 32 year old Zuckerberg, was honored based on various criteria, including the company’s performance year over year as well as his vision for growth and the ability to achieve it.

The list consisted of 50 personalities. The top 5 among them are:

Mark Zuckerberg, born on May 14, 1984 is an American computer programmer, internet entrepreneur, and philanthropist. He is the chairman, chief executive officer, and co-founder of social networking website Facebook. His net worth is estimated to be US $55.3 billion as of October 2016, ranking him as the 5th richest person in the world 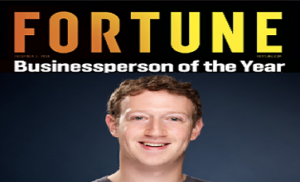 Zuckerberg as a business person

An examination of Zuckerberg’s management approach reveals that his success rests on three pillars:

Facebook was launched on February 4 2004. It is about 16,000-employee media powerhouse worth $350 billion and also an advertising-technology with huge annual revenues of $27 billion in 2016 and extraordinary profits of $7 billion. The social site has almost 1.8 billion users.