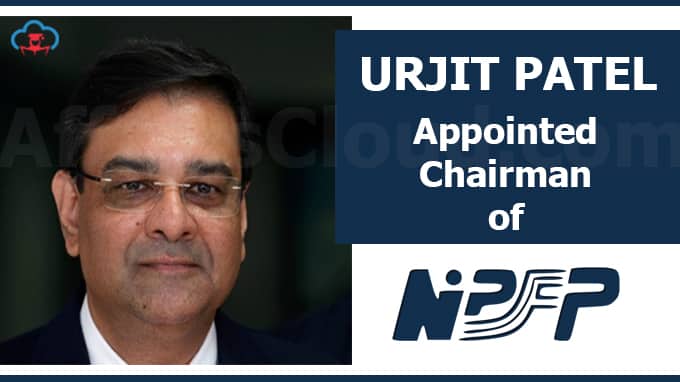 On 19th June 2020, The former governor of Reserve Bank of India (RBI) Urjit Patel was appointed as the Chairman of National Institute of Public Finance and Policy (NIPFP). He will start his 4year tenure on 22nd June 2020 succeeding Vijay Laxman Kelkar, former chairman of NIPFP.

i.The role is advisory in nature and he does not interfere in the daily function of the institution.

ii.He heads the board meeting of NIPFP which will be held 3 to 4 times a year.

The governing body of the NIPFP consists of,

i.He hails from a business family in Nairobi and until 2013 he was holding the nationality of Kenya.

ii.He went to the London School of Economics, Oxford University and Yale University.

iii.He was appointed as the deputy Governor of RBI, shortly after acquiring Indian Nationality in January 2013.

iv.He was appointed as the Governor of RBI in September 2016 succeeding Raghuram Rajan.

vi.He was involved in the autonomy and independence of the central bank.

About NIPFP:
The centre undertakes research, policy advocacy and capacity building in areas related to public economics and the institute assists the central, state and local government in formulating policies by providing an analytical base.
Chairman– Vijay Laxman Kelkar (Urjit Patel, will take office on 22nd June 2020)
Headquarters– New Delhi