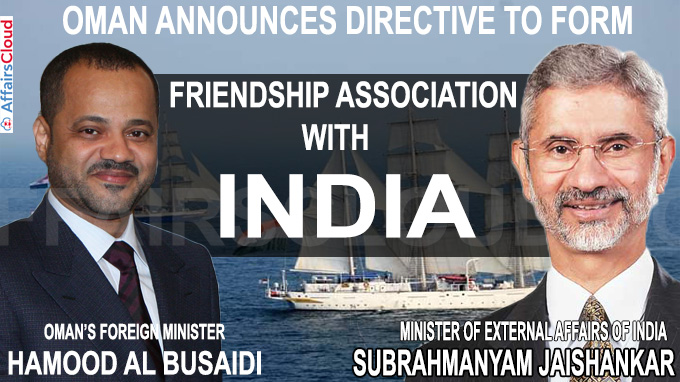 On December 2, 2020, External Affairs Minister (EAM), S. Jaishankar and Sayyid Badr bin Hamad bin Hamood Albusaidi, Foreign Minister of Oman held a virtual meeting. During the meeting, EAM appreciated Oman’s directive to establish Oman-India Friendship Association. The establishment of the Friendship Association will be the First Ever in the West Asia region.

Objective of the Friendship Association:

i.The association has been established with an aim of promoting friendship & understanding between the two countries.

ii.The association will also be useful for discussion of matters of mutual interest between Oman and India Business and social communities in the Sultanate.

i.India conveyed its greetings to Oman on the occasion of the 50th National Day of Oman’s modern renaissance.

ii.EAM, Jaishankar lauded the Government of Oman for its support to the Indian Community during COVID-19.

iii.Both countries agreed to work together to address challenges arising due to the Pandemic.They exchanged their views on regional and multilateral issues and agreed to cooperate in International forums.

iv.India & Oman reviewed the progress of cooperation in key areas of India-Oman Strategic Partnership such as defence and security, economic cooperation, capacity building and training, consular issues and people-to-people ties.

v.They noted the huge potential for the expansion of economic partnership between the two economies.

Importance of Health and Food Security:

They discussed the importance of health and food security in future and held detailed talks about the ability of partnership of both countries to address the issue.

i.India is among Oman’s Top Trading Partners, and Oman was India’s 39th Largest trade partner in 2018-19.

ii.Oman has around 4100 Indian Companies and establishments, with an estimated investment of over USD 7.5 Billion.

Oman will be a vital country for India to increase its strategic depth in the Indian Ocean Region (IOR).

i.In February 2018, Oman and India signed a pact which gave Indian Navy access to Duqm Port in Oman. The port will be used by Indian Navy for Logistics and support.

ii.In December 2019, India and Oman signed the ‘Maritime Transport Agreement’, which will help India to expand its base in the Western and Southern Indian Ocean as part of its Indo-Pacific vision.

i.On October 19, 2020, the 9th Session of the India-Oman Joint Commission Meeting (JCM) was held virtually, it was co-chaired by Hardeep Singh Puri, Minister of State (MoS) for Commerce and Industry and Qais bin Mohammed al Yousef, Minister of Commerce, Industry and Investment Promotion of Oman.