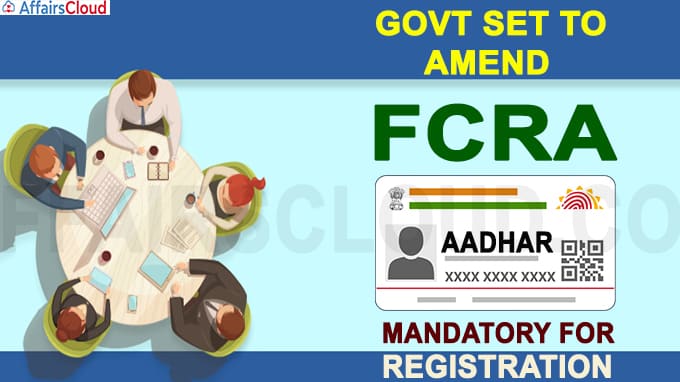 The Ministry of Home Affairs (MHA) has redefined guidelines on how non-governmental organisations (NGOs) can accept, transfer and utilise foreign donations and contributions by amending the provisions of the Foreign Contribution Regulation Act, 2010 (FCRA) with Foreign Contribution (Regulation) Amendment Act, 2020 which has come into force w.e.f. September 29, 2020.

Since 1976, the FCRA regulates foreign donations in ensuring that such contributions don’t adversely affect internal security. It was amended in 2010.

Here is the brief of major changes under Foreign Contribution (Regulation) Amendment Act, 2020

Aadhar requirement mandated: A new provision is introduced in this act under which furnishing of Aadhaar numbers by office-bearers of NGOs has become mandatory for registration. In case of a foreigner, a copy of the passport or the Overseas Citizen of India (OCI) card is required.

Forbidding of foreign contribution recipient from utilising/receiving its funds: The Act substituted existing Section 11 of FCRA to bar its authorized individuals in utilizing or receiving foreign contribution without Government approval. Currently, this restriction applies only when such a person is found guilty of an FCRA contravention.

FCRA bank account in SBI , Delhi Mandated: As per the amendment of Section 17 of FCRA, the foreign contribution can be received only in “FCRA Account” opened in the State Bank of India (SBI) branch in New Delhi.

ii.On August 17, 2020, Ministry of Home Affairs (MHA) approved the renaming of Manduadih Railway Station in Uttar Pradesh (UP) as ‘Banaras’.