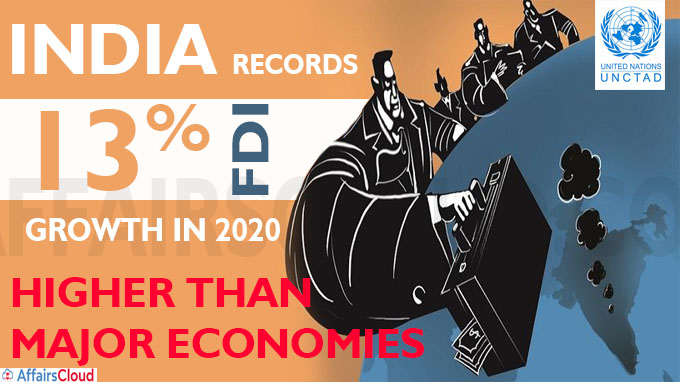 In accordance with the United Nations Conference on Trade and Development (UNCTAD)’s 38th Global Investment Trends Monitor, after the 1990s, the year 2020 saw a fall down in Global foreign direct investment (FDI) which decreased 42% to $859 billion from $1.5 trillion in 2019.

The organization projected weak FDI flows in the world due to uncertainty over the evolution of the COVID-19 pandemic. It has projected a 5% to 10% FDI slide in 2021 in 2020’s World Investment Report. On the other hand, the global economy will recover in 2021.

–Apart from FDI in the digital sector, another key reason for FDI rise in India is merger and acquisition (M&A) as Cross-border M&A sales grew 83% to $27 billion. For eg:

–The fall was highly uneven across developing regions viz. -37% in Latin America and the Caribbean, -18% in Africa and -4% in developing countries in Asia i.e. estimated $476 billion.

–Flows to members of the Association of Southeast Asian Nations (ASEAN) contracted by 31% to $107 billion,

–Flows to North America declined by 46% to $166 billion, with cross-border mergers and acquisitions dropping by 43%. Announced greenfield investment projects also fell by 29% and project finance deals tumbled by 2%.

i.On November 19, 2020 United Nations Conference on Trade and Development (UNCTAD) released a report titled ‘The Impact of the COVID-19 Pandemic on Trade and Development: Transitioning to a New Normal’ . The report states that a viable novel coronavirus disease (COVID-19) vaccine will not halt the spread of economic damage. The economic setback will be experienced for a long time, especially by the poorest and most vulnerable countries.