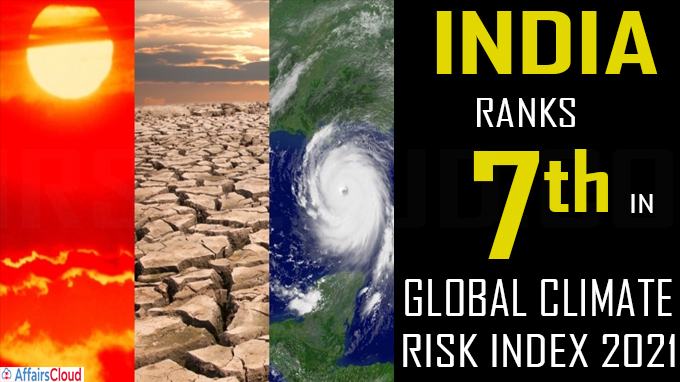 India has improved its ranking to 7th in the 16th edition of “Global Climate Risk Index (CRI) 2021- Who suffers Most from Extreme Weather Events? Weather-related Loss Events in 2019 and 2000 to 2019” from 5th in CRI 2020, which has been released by Germany-based think tank Germanwatch. The list has been topped by Mozambique followed by Zimbabwe, and Bahamas.

In the list of big and developed economies, Australia topped the list with overall rank of 19th followed by China (32) and Italy (35).

–The monsoon condition in 2019 continued for a month longer than usual, with the surplus of rain. The floods caused by the heavy rains were responsible for 1, 800 deaths across 14 states and led to the displacement of 1.8 million people.

–Overall, 11.8 million people were affected by the monsoon season with the economic damage estimated to be US$ 10 billion.

–India faced a record of eight tropical cyclones in 2019. Out of them 6 become ‘very severe’.

–Eight of the ten countries most affected between 2000 and 2019 are developing countries with low or lower middle income per capita.

–Poorer countries are hit hardest because they are more vulnerable to the damaging effects of a hazard and have lower coping capacity.

–There is an urgent need for sustained global efforts to make the earth livable in the coming years.

–Notably, the 100 billion US dollars per year, pledged by the rich countries to assist the poor and developing countries is enough to save them from disasters,

It analyses quantified impacts of extreme weather events – both in terms of the fatalities as well as the economic losses. The index is based on data from the Munich Re NatCatSERVICE11. Besides, it uses the socio-economic data from the International Monetary Fund (IMF).

ii.According to a First-of-its-kind survey conducted by Zoological Survey of India (ZSI) under the Ministry of Environment, Forest and Climate Change (MoEFCC), Malayan Giant Squirrel or Black Giant Squirrel (Ratufa bicolor) could fall by 90% in India by 2050 due to shrinking of its original habitat zone.