On January 27, 2020 the European Union(EU) parliament has decided to make a debate and conduct vote on the resolution against the controversial Citizenship Amendment Act(CAA) 2019, and on the annexation of occupied Kashmir by India after abrogating Jammu and Kashmir’s special status. The decision taken after Pakistan Prime Minister Imran Khan’s global campaign against CAA and the Kashmir issue, cited that the annexation of Kashmir was in clear violation of the United Nations Security Council (UNSC) resolutions. 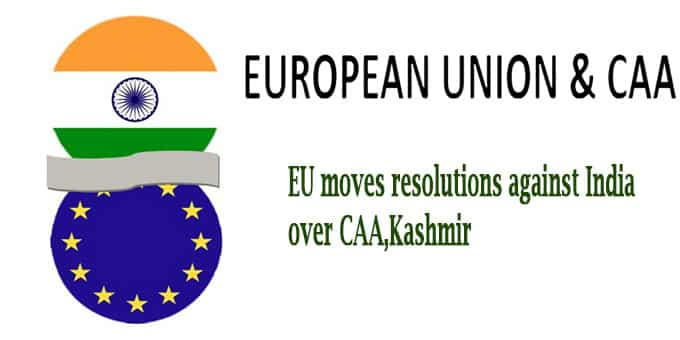 Resolution against CAA 2019 and Kashmir issue:

i.Out of the total 751 EU parliament members, 626 have moved a total of 6 draft resolutions related to both of the above mentioned issues. The debate will be conducted on January 29, 2020 with the voting on January 30th in the parliament in Brussels, Belgium

ii.The resolution condemns implementation of CAA citing that the act is seen as a descrimination against Muslims. The resolution calls on to promote implementing the UNSC resolution on Kashmir. Engagement in a peaceful dialogue by India with various sections of the population is required as per the resolution.

iii.This need for a resolution by the EU against India comes ahead of Prime Minister Narendra Modi’s visit to Brussels,Belgium for the 15th India-EU summit in March, 2020.

i.Not complying with UNSC:The draft resolution noted that India did not implement the UNSC resolution which is needed, to require a referendum. The referendum is to allow all Kashmiris to determine as well as decide the future status of Kashmir.

iii.Security forces to comply to UN principles: Security forces should be ensured that they comply with the basic principles of the United Nations(UN) on the use of force and firearms by law enforcement officials.

iv.NRC: Other than CAA, the National Register of Citizens (NRC) in Assam is also expected to deprive citizenship of India of the minorities living in the country.

v.References made in resolution:  Charter of the United Nations, Article 15 of the Universal Declaration of Human Rights (UDHR), India-EU Strategic Partnership Joint Action Plan signed in November 2005, and EU-India Thematic Dialogue on Human Rights were made as a reference in the resolution.

vi.UN Declaration: The resolution reminds the Indian govt of its obligations under the 1992 UN Declaration on the Rights of Persons Belonging to National or Ethnic, Religious and Linguistic Minorities. The declaration establishes to protect the identity of religious minorities within their territories.

vii.JNU violence: The resolution mentioned about recent violence by mobs that took place at Jawaharlal Nehru University in New Delhi in which the students protested against CAA and NRC and the police refused to control and arrest the mob.

viii.Resolution passing: If the resolution is passed, it will be formally sent to Indian government and Parliament as well as to the European Commission chiefs.

ix.Resolution sponsor: The main resolution is sponsored by European People’s Party(EPP). It is the largest bloc in the EU and the 2nd biggest one is backed by right-wing European Conservatives and Reformists. More left-wing parties like the Greens and Social Democrats are also sponsoring the resolution.

x.EU relationship with India:  The European Union(EU) is India’s largest trading partner and has accounted for trade in goods worth 92 billion euros or 12.9% of total Indian trade. EU is also one of the leading destinations for Indian exports which is 18% of the total value.

CAA: The Citizenship (Amendment) Act, 2019 amended Citizenship Act, 1955 by granting citizenship to undocumented non-Muslims migrants from Bangladesh, Pakistan and Afghanistan who came to India on or before December 31, 2014. The act also relaxes the requirement of residence in India for citizenship by naturalisation from 11 years to 5 years for these migrants. Click here to know more.