The president of the Federative Republic of Brazil, Jair Messias Bolsonaro paid a 4-day official visit to India from January 24-27, 2020. The highlights of the visit in detail are as follows: 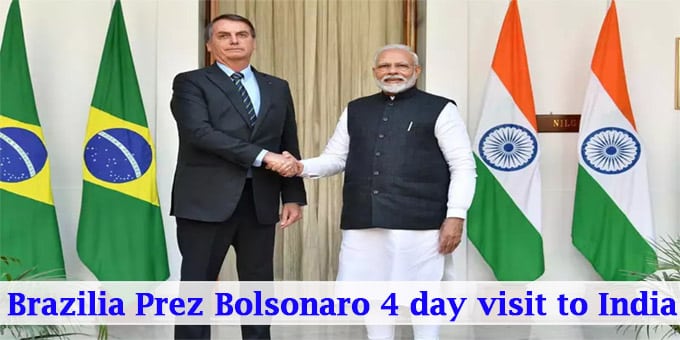 15 MoU signed:
Brazil and India signed 15 Memorandum of Understanding (MoU) and also signed an action plan to deepen strategic partnership. The MoU in detail are as follows:

Brazil’s gunmaker Taurus pacted with steel group Jindal to produce guns in India:
Brazilian gunmaker Taurus Armas SA has signed for a joint Venture(JV) with Indian steelmaker Jindal Group to manufacture and sell guns in India.  As per the agreement Jindal will hold a 51% stake in JV and the remaining 49% will be held by Taurus.

Participation at India’s 71st republic day:
Bolsonaro was the chief guest for the Republic Day celebrations and attended the Parade ceremony at Rajpath in New Delhi along with Indian Prime Minister Shri Narendra Modi, President Ram Nath Kovind along with other leaders.  It was the 1st visit of Bolsonaro after assuming his office in January 1, 2019.

ii.Previous guest: In the year 2019, South African President Cyril Ramaphosa was the chief guest of the 70th Republic Day event.

Piyush Goyal addressed India-Brazil Business Forum in New Delhi:
The Union Minister of Commerce and Industry Shri Piyush Goyal addressed the gathering at the India-Brazil business forum in New Delhi. The forum was organised by Industry Body Associated Chambers of Commerce and Industry of India (Assocham). Assocham has also announced to set up an office in Brazil. Visa free travel between the two countries was announced by the Brazilian president during the forum.

i.$15billion target set: The bilateral trade and work target of $15 billion between India and Brazil was set to be achieved by 2022. The current trade level accounts to $8.2 billion. The 2018-19 export and import details between the two countries are as follows:

ii.IR with 100% electrification by 2024: The Indian Railways(IR) has set a target to run entire railway network with 100% of electricity by 2024. IR will also be the 1st railway in the world with large scale and size to be run on electricity. By 2030 IR plans to run on clean energy and become net zero carbon emitter.

Visit in India:
The Brazilian President visited the Taj Mahal in Agra, Uttar Pradesh(UP) before concluding his 4-day visit to India. He had also visited the Akshardham Temple in New Delhi.