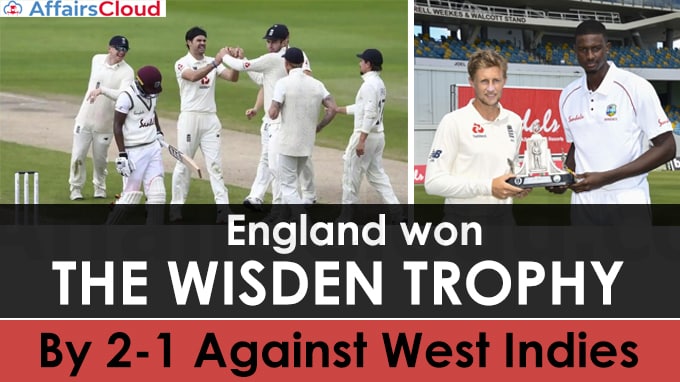 On 28th July 2020, England won the third and final Wisden Trophy test match against the West Indies by 269 runs and won the series by 2-1. After this final series, The Wisden trophy will be retired and displayed at the Museum at Lord’s. It will be replaced by the Richards-Botham Trophy. The series started on 8th July 2020.

The Wisden Trophy was first awarded in 1963 to commemorate the 100th edition of Wisden Cricketers Almanack.

ii.During the final match against West Indies Board became the 7th bowler in the history of Test cricket to scalp 500 wickets in his 140th test.

iii.Ben Stokes, test vice-captain of England replaced Jason Holder of West Indies by 38 points and became the No.1 all-rounder.

iv.England’s victory against West Indies in the second test match earned the player of the match award to Stokes which helped him to overtake Jason Holder and become No.1 in ICC Test All-rounder rankings.

i.Virat Kohli retained his 2nd rank in the ICC Test Batting ranking with 886 rating and Cheteshwar Pujara and Ajinkya Rahane ranked among the top 10 with 8th and 10th rank respectively.

iii.Jasprit Bumrah moved 7 places and secured the 8th rank, he is the only Indian player among the top 10 of the ICC Test Bowling rankings.