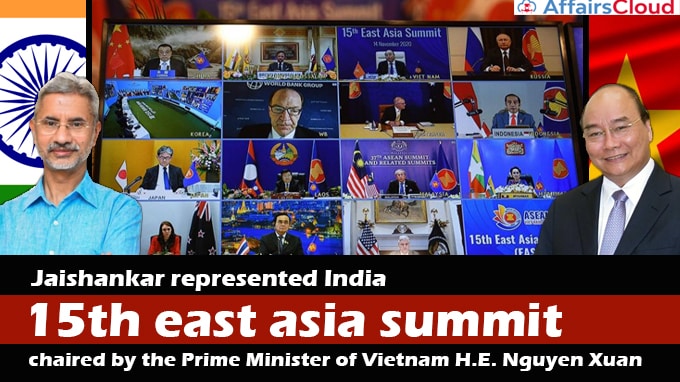 i. Kuala Lumpur Declaration, and Ha Noi Declaration was adopted during the summit.

ii.The 15th EAS summit was held on the occasion of the 15th Anniversary of the East Asia Summit.

All the 18 countries (10 ASEAN Countries & India, China, Japan, Australia, New Zealand, Russia, US and the Republic of Korea) participated in the summit.

i.During the summit, the leaders agreed to strengthen the EAS platform on its 15th Anniversary. The First EAS summit was held in December 2005 in Kuala Lumpur, Malaysia.

iii.During the Summit, the leaders adopted four other statements on

v.Key issues such as South China Sea, Situation in Koren Peninsula and Rakhine State were discussed.

i.Jaishankar briefed EAS leaders about India’s response to Pandemic and its effort to support the international community.

iii.India pitched for promoting rules-based order in the region to upload adherence to UNCLOS (United Nations Convention on the Law of the Sea).

iv.At the East Asia Summit in Bangkok in 2019, Prime Minister Narendra Modi proposed the setting up of Indo-Pacific Ocean’s Initiative (IPOI) to conserve and use the maritime domain sustainably.

i.It was established in 2005, EAS is a premier leader-led forum for discussion on important strategic issues in Indo-Pacific region.

ii.India is a founding member of EAS. The 18 members of the EAS together represent 54% of the world population and account for 58% of the global GDP.