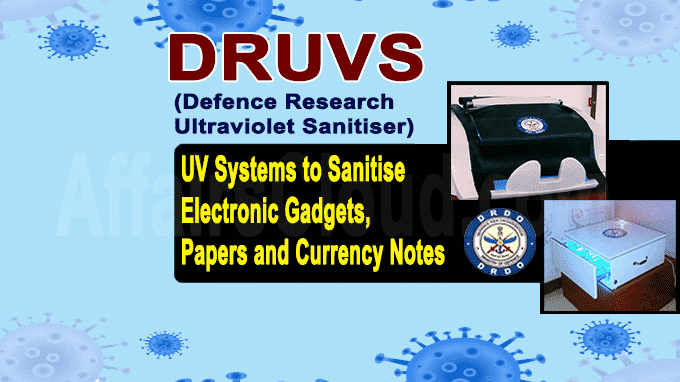 i.About DRUVS: The DRUVS cabinet is having contactless operation which is very important to eliminate the spread of virus.

ii.The proximity sensor switches clubbed with drawer opening and closing mechanism, makes its operation automatic and contactless. It provides 360 degree exposure of UVC to the objects placed inside the cabinet.

iii.Once the sanitisation is done, the system goes in sleep mode hence the operator need not wait or stand near the device.

vi.For that purpose, a sanitising technique has been developed, where one has to just place the loose currency notes at the input slot of the device. It picks the notes one by one and makes them pass through a series of UVC lamps for complete disinfection.

vii.About Ultraviolet C: It defines the radiation that is in the region of the ultraviolet spectrum which extends from about 200 to 280 Nanometer (nm) in wavelength. It is more hazardous than UVB but is mostly absorbed by the earth’s upper atmosphere.

About RCI:
Research Centre Imarat (RCI) is a DRDO laboratory located in Hyderabad. The lab is responsible for Research and Development of Missile Systems, Guided Weapons and advanced Avionics for Indian Armed Forces. It was established by APJ Abdul Kalam in 1988.
Director– Shri BHVS Narayana Murthy.