We are here for you to provide the important Current Affairs September 13 2018 which have unique updates of all daily events from all newspapers such as The Hindu, The Economic Times, PIB, Times of India, India Today, Indian Express, Business Standard, all Government official websites. Our complete current affairs helps you to get more marks in Banking, insurance, UPSC, SSC, CLAT, Railway and all other competitive Exams. 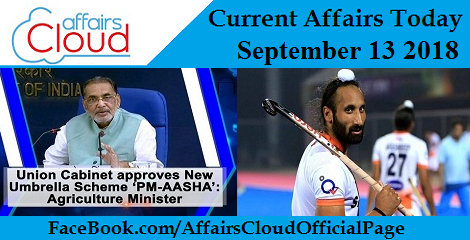 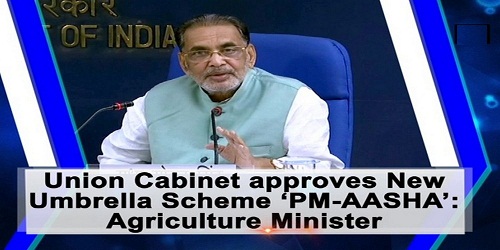 Objective:
Aimed at ensuring remunerative prices to farmers for their produce as announced in the Union Budget for 2018.
Key Points:
i. An additional government guarantee of Rs.16,550 crore has been provided making the umbrella scheme Rs. 45,550 crore in total.
ii. Additionally, Rs. 15,053 crore is sanctioned for PM-AASHA implementation.
iii. The new Umbrella Scheme comprises of:

iv. Also, existing schemes for providing MSP for crops will be continued for:

v. Cabinet has encouraged participation of private sector in procurement.
Other News:
i. Earlier, the government has already increased the MSP of Kharif crops by 1.5 times the cost of production.
ii. This is accordance with the government’s goal of doubling farmer’s income by 2022.

CCEA approved electrification of remaining unelectrified broad gauge (BG) routes of Indian Railways
On September 13, 2018, Cabinet Committee on Economic Affairs has also approved electrification of remaining un-electrified broad gauge routes of Indian Railways
Objective:
To reduce the use of imported fossil fuels & improve energy security
Key Points:
i. A total of 13,675 kilometres comprising of 108 sections of un-electrified routes will be electrified at a cost of Rs.12,134.50 crore rupees by 2021-22.
ii. This would reduce the consumption of high speed diesel oil by about 2.83 billion litres per annum saving Rs 13,510 crore per annum in fuel bill and net savings of Rs. 3,793 cr per annum.
iii. Additionally, the maintainance cost of will be reduced by almost from Rs. 32.84 per thousand GTKM for diesel to Rs. 16.45 per thousand GTKM for electric locomotive.
iv. This would create direct employment of about 20.4 crore man-days.
Indian Railways:
♦ Union Minister: Shri. Piyush Goyal.
♦ Minister of State: Rajen Gohain and Manoj Sinha.
♦ Chairman: Ashwani Lohani. 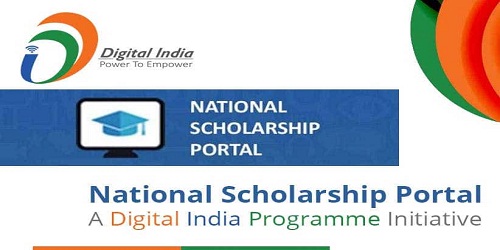 Objective:
For smooth, accessible and hassle-free scholarship system for students from poor and weaker sections.
Key Points:
i. The app would:

Achievements:
i. Under “Empowerment without Appeasement” policy of the government:

ii. Ministry of Minority Affairs has worked with commitment to “3E- Education, Employment & Empowerment” and “3T-Teacher, Tiffin, Toilet”.
iii. This enabled inclusion of educational institutions of all Minority communities including Madarsas in mainstream education.

Rs 2,400 crore supplementary budget passed by Chhattisgarh govenrment
On September 13, 2018, Chhattisgarh Assembly passed Rs 2,400 crore supplementary budget for the financial year 2018-19.
i. It consisted of a bonus to farmers against paddy procurement in the ongoing Kharif season.
ii. It will start from November 1, 2018.
iii. With this the size of annual state budget went up to Rs 94,775 crore for financial year 2018-19.
Achievements of Chhattisgarh:
i. The state recorded surplus revenue in 13 years.
ii. The tax and Gross State Domestic Product (GSDP) ratio that shows the financial management of the state is at 19% to the national average ratio of 12 %.
iii. As per an RBI report, the total loan-burden of the state is 17.4 percent of GSDP compared to average national ratio is 24.3 %.
Chhattisgarh:
♦ Chief Minister: Raman Singh.
♦ Governor: Anandiben Patel.
♦ National Parks: Indravati National Park, Kanger Ghati National Park, Sitanadi National Park.
♦ Chhattisgarh’s new capital Naya Raipur to be named Atal Nagar. 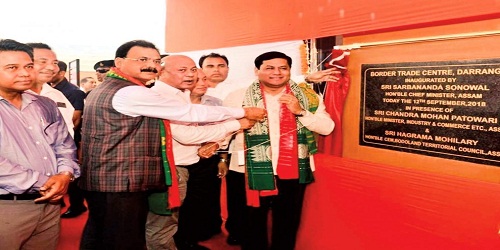 J&K launched E-Plant clinics in Udhampur to support research to help farmers
On September 13, 2018, Jammu and Kashmir administration launched E-Plant clinics in Udhampur district in an event organized by ADIO NIC and Agricultural Department.
i. These have been established by the Agriculture Department in collaboration with Centre for Agriculture and Bioscience International (CABI).
ii. This will make technological innovations and advancement in research in the agriculture sector and help guide farmers.
iii. It would provide identifying pests and other crop infestations, and also provide on-spot remedial measures.
iv. The clinics would be made functional at Majalta, Ramnagar, Udhampur, and Chennai.
National Parks in Jammu and Kashmir:
Dachigam National Park, Hemis National Park, Kishtwar National Park, Salim Ali National Park.

India signed 2 pacts with Rakhine State for capacity building, economic development
On September 13, 2018, India signed 2 agreements with Myanmar’s Rakhine State Government to facilitate capacity building and economic development in the province.
Objective:
To promote agricultural mechanization and computer literacy for employment opportunities in the software sector.
Key Points:
i. The agreements were signed between
U Kyaw Lwin, Minister for Agriculture,Livestock, Forestry and Minerals, Dr. Chan Thar, Minister for Department of Social Affairs (both from Rakhine State Government) from Myanmar and
Vikram Misri, Ambassador of India to Myanmar.
ii. According to MOU with Ministry of Agriculture, Livestock, Forestry and Minerals of Rakhine: India will supply 15 tractors and 15 crawler harvesters to the State Government.
iii. Under the MOU with Department of Social Affairs of the Rakhine State Government, the Indian Embassy will provide 40 computers and peripherals to the Sittwe Computer University.
iv. Additionaly, India and Myanmar signed MOU on the Rakhine State Development Programme, under which India will provide US$ 25 million in grant assistance over a period of five years.
v. Under this:
A pilot project to build 250 prefabricated houses in Northern Rakhine would be made for Rakhine Buddhist, Hindu and Muslim communities.
Myanmar:
♦ Capital: Naypyidaw.
♦ Currency: Burmese kyat.

ii. Discussions of the meetings:

iii. The 4th meeting of Joint Working Group on Political and Security Cooperation between India and Afghanistan will be held in New Delhi in 2019.
Afghanistan:
♦ Capital:  Kabul.
♦ Currency: Afghan afghani 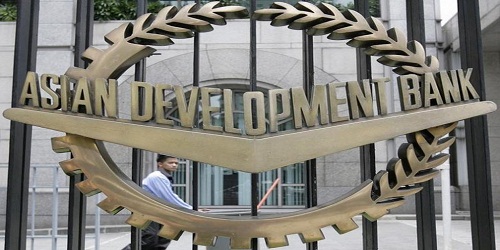 About the Report:
i. This report provides the latest available economic, financial, social, SDG indicators and environmental statistics for the 48 regional members of ADB.
ii. This year’s report is focusing on: Technological Innovation for Agricultural Statistics.
iii. It is divided in 3 sections:

According to the report:

Government targeted to contain fiscal deficit at 3.3 pc of GDP
On September 13, 2018, Govt decided to contain fiscal deficit at 3.3 pc of GDP for the fiscal year ending March 2019 to avoid a twin deficit problem.
i. Excise duty cut on petrol and diesel has been ruled out.
ii. Further, cutting expenditure, though might bring down the fiscal deficit , would result in a stunted economic growth in the long run.
iii. Hence, the share of non-oil tax to GDP has to be hiked.
iv. The government’s finances have shown improvement in July with fiscal deficit at 86.5 per cent of the Budget Estimate (BE).
Background:
♦ Depreciating rupee and high crude import bill would put pressure on CAD.
♦ The current account deficit (CAD), which is the difference b etween inflow and outflow of foreign exchange, rose to USD 18 billion or 2.4% of GDP in April-June on account of trade deficit.

Objective:
To strengthen the ‘Make in India’ initiative.
Key Points:
i. The dump truck has been developed for use in the project of Northern Coalfields Limited (NCL), Singrauli, Madhya Pradesh.
ii. It is an electric drive rear dump truck for large scale mining operations.
iii. To make it environment friendly, it does not have transmission oil, final drive and brake cooling oil and weighs 335 tonnes when fully loaded.
iv. It is powered by Tier II emission compliant Modular Common Rail Electronic Engine with 2300 HP
BEML:
♦ Under Ministry of Defence.
♦ Established: 1964.
♦ CMD: Deepak Kumar Hota. i. This has been built for the National Technical Research Organisation under PMO and National Security Adviser.
ii. The cost of the project is Rs. 750 crore.
iii. It would be inducted in the Indian Navy.
About the Ship:
It has a capacity to carry 300 crew and high tech gadgets and would have a helicopter landing deck.
HSL:
Established: 1941.

Manoj Jhalani, AS & MD (NHM) selected for UNIATF Award
Manoj Jhalani, Additional Secretary & Mission Director (National Health Mission), Ministry of Health and Family Welfare, has been conferred the UN Interagency Task Force (UNIATF) Award for his contribution towards prevention and control of non-communicable diseases (NCDs) and associated Sustainable Development Goals.
Manoj Jhalani – UNIATF Award:
i. Manoj Jhalani will be presented the UNIATF Award at the 3rd High-level meeting of the UN General Assembly organized by UNIATF in New York on 27th September 2018.
ii. This award is conferred in recognition of Indian Government’s efforts to prevent and control Non-Communicable Diseases.
iii. National Programme to control NCDs has been expanded by more than 8 times in the last 4 years. Now, it covers all the 36 States/Union Territories.
About United Nations Interagency Task Force (UNIATF) on the Prevention and Control of NCDs:
♦ Objective – coordinates the activities of relevant UN organizations and other inter-governmental organizations to support Governments to meet high-level commitments to respond to NCD epidemics throughout the world
♦ Established – June 2013
♦ Placed under – World Health Organisation (WHO) 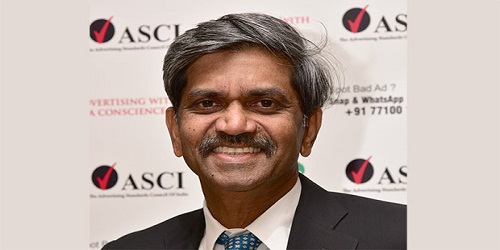 Retirement of Sardar Singh:
i. Sardar Singh has made this decision after India’s disappointing performance at the Asian Games where it failed to defend the title and won only a Bronze medal.
ii. As a result, India did not get direct qualification to the 2020 Olympic Games.
iii. Sardar Singh is 32 years old. He hails from Sirsa in Haryana. He made his senior debut for India against Pakistan in 2006.
iv. He has played more than 350 international matches. He was the Indian hockey team captain for 8 years from 2008 to 2016.
v. He was awarded Arjuna Award in 2012 and Padma Shri award in 2015. He was the youngest player to captain the Indian team when he led the team at the 2008 Sultan Azlan Shah Cup. He has also represented India 2 times at the Olympics.

Mumbai-based artist Mehlli Gobhai passes away
On 13th September 2018, Mumbai-based artist Mehlli Gobhai passed away following a short term illness.
Death of Mehlli Gobhai:
i. Mehlli Gobhai was 87 years old. He was born in 1931. He had studied at St. Xavier’s College, Mumbai, the Royal College of Art, London and Pratt Graphic Centre and the Art Students League, New York.
ii. He had worked in New York for more than 20 years. He returned to Mumbai in the 1980s.
iii. He had held many solo and group shows in India and other countries. He had held solo exhibitions at Gallery Chemould, Bombay Art Gallery and Gallery 7 and the New India House in New York.