We are here for you to provide the important Current Affairs September 28 2018, which have unique updates of all daily events from all newspapers such as The Hindu, The Economic Times, PIB, Times of India, India Today, Indian Express, Business Standard, all Government official websites. 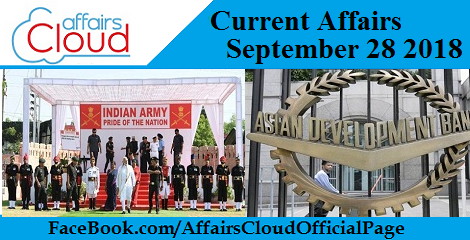 President Kovind gives assent to set up a committee to run Medical Council of India until Parliament passes legislation
On September 27, 2018, President Ram Nath Kovind gave his assent to set up a committee to run the Medical Council of India, MCI.
i. This would be continued till Parliament passes legislation to replace the body with a new commission.
ii. The Board of Governors who would run the MCI include Niti Aayog member Dr V K Paul and AIIMS Director Randeep Guleria.
Background:
Parliament would pass a pending legislation to replace the Council with a National Medical Commission. Rajasthan.
i. He also attended the Combined Commanders’ Conference along with the Defence Minister.
ii. This was done to mark the second surgical strike anniversary when the Indian Army went across the Line of Control (LoC) and destroyed terrorist launch pads of Pakistan.
iii. He also laid the wreath at Konark War Memorial and was honoured with ‘guard of honour’. Other News:
i. NIC also will play an important part in the establishment of judicial data collection.
ii. The minister also launched an app named Digi VAARTA (Vehicle to Accelerate Access and Reach to Transformational Action ) for this purpose.
iii.It is a platform designed to enable Financial and Social Inclusion by educating citizens on various schemes and programmes.
iv. The interactive inclusion thourgh Digi VAARTA would be available in two channels and two languages (Hindi and English and a toll free number: 14444.
Ministry of Electronics & Information Technology:
♦ Union Minister: Ravi Shankar Prasad.
♦ Minister of State: Shri S.S. Ahluwalia.
♦ Secretary: Shri Ajay Prakash Sawhney. i. He released a publication titled “Telecom Sector Growth & FDI: A Way Ahead”.
ii. It was compiled by FIPP Wing of the Department of Telecommunications (DoT) and Indian Institute of Foreign Trade (IIFT).
iii. FDI in the telecom space is aimed to reach USD 100 billion by 2022.
iv. A draft National Digital Communications Policy (NDCP) 2018 is underway to promote new technologies in the sector.
Achievements:
i. India is the second largest telecommunications market in the world with around 1.18 billion customers.
ii. FDI in the telecom sector has grown nearly five times over the last three years – from $1.3 billion in 2015-16 to $ 6.2 billion in 2017-18.
Department of Telecommunications:
♦ Minister of State: Shri Manoj Sinha.
♦ Chairman: Aruna Sundararajan.

Over 6 lakh 26 thousand more affordable houses approved under PMAY (Urban) by Centre
On September 26, 2018, Ministry of Housing & Urban Affairs approved the construction of 6,26,488 more affordable houses under Pradhan Mantri Awas Yojana (Urban).
i. This decision was taken during the 38thmeeting of the Central Sanctioning and Monitoring Committee.
ii. A total of 11 states are involved in the proposal of the houses.
iii. They are:

iv. After this approval, cumulative approvals under PMAY (U) became 60,28,608 under CSMC.
v. Ministry has decided to release Rs. 486.87 Cr for first and second instalments together for projects in Kerala after the devastation by the floods.
Ministry of House and Urban Affairs:
♦ Minister of State (I/C): Shri Hardeep Singh Puri.
♦ Secretary: Shri. Durga Shanker Mishra.

High-level panel formed to look into global trade challenges: Commerce Ministry
On September 28, 2018,the Commerce Ministry Friday said it has constituted a High Level Advisory Group (HLAG) to look into the challenges of global trade.
i. The High Level Advisory Group (HLAG) would be chaired by Surjit S Bhalla, Director of Oxus Research and Investments.
ii. Other members would include: former foreign secretary S Jaishankar, Principal Economic Advisor Sanjeev Sanyal.
iii. It will meet regularly over the next two months and make recommendations to facilitate the formulation of future trade policies.
iv. It would focus on boosting India’s share and importance in global merchandise and services trade and management of bilateral trade relations.

8-member Lokpal search committee headed by former Supreme Court judge Ranjana Prakash Desai formed: Ministry of Personnel
On September 28, 2018, the Ministry of Personnel announced that the government set up an eight-member Lokpal Search Committee under the Chairmanship of former Supreme Court Judge, Justice Ranjana Prakash Desai.
i. Other members include: Prasar Bharati Chairman A Surya Prakash, former SBI Chief Arundhati Bhattacharya and Justice Sukha Ram Singh Yadav.
ii.T he panel will recommend the names for the Chairperson and Members of the Lokpal to the Lokpal Selection Committee.
iii. The proposed Lokpal will have a chairman and eight members to enquire into offences under the Prevention of Corruption Act against the Prime Minister (with specified safeguards) controlled by the central government, and employees of association of persons that have received funding from the government or have received public donation or foreign funding upto Rs.10 lakh a year.

Sabarimala Temple accessible to women of all ages: Supreme Court
On September 28, 2018, A five-judge Constitution bench chaired by Chief Justice of India Dipak Misra ruled out the provisions of Kerala Hindu Places of Public Worship (Authorisation of Entry) Rules, 1965.
i. According to this, women of the age group 10-50 were denied to enter the Sabarimala Temple.
ii. The Supreme Court struck it down as it violated the right of Hindu women to practice religion.
iii. The bench consisted of comprised Justices R F Nariman, A M Khanwilkar, D Y Chandrachud and Indu Malhotra.
Background:
The Sabrimala Temple in Kerala is devoted to Lord Ayyappa.
Kerala:
♦ Capital: Thiruvananthapuram.
♦ Chief Minister: Pinarayi Vijayan.
♦ Governor: Palanisamy Sathasivam. 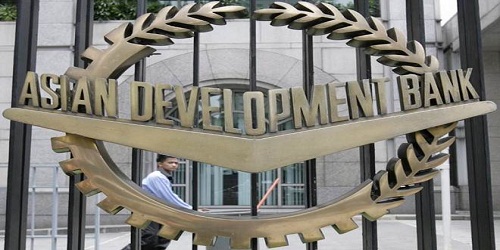 i. The facilities will help enhance Madhya Pradesh’s technical and vocational education and training (TVET) system.
ii. The new flagship Global Skills Park (GSP) campuswill be established in Bhopal.
iii. It will consist of the core advanced training institutes including the Center for Occupational Skills Acquisition and Center for Advanced Agricultural Training.
iv. These institutes would provide entrepreneurship, training of trainers, and skill-related research benefitting about 20,000 trainees and trainers.
Other News:
i. ADB will also administer a $2 million technical assistance grant from the Japan Fund for Poverty Reduction, financed by the Government of Japan.
ii. This will be for guidelines and setting up of the GSP Society and development of reforms for industrial training institutes.
iii. The Madhya Pradesh Skills Development Project will also help in modernizing 10 industrial training institutes across the state according to industry and market needs.
iv. It would include renovating training infrastructure and upgrading skills courses.
ADB:
♦ Headquarters: Manila, Philippines.
♦ Established in 1966.
♦ Members- 67 , (48 from Asian region).
Madhya Pradesh:
♦ Capital: Bhopal.
♦ Chief Minister: Shivraj Singh Chouhan.
♦ Governor: Anandiben Patel.
National Parks in Madhya Pradesh:
Kanha Tiger Reserve, Madhav National Park, Panna National Park, Bandhavgarh National Park.

Punjab National Bank (PNB) board approves proposal to raise Rs 5,431 crore fund from government
On 27th September 2018, Punjab National Bank (PNB) approved proposal to raise Rs 5,431 crore capital support from the central government through preferential issue of equity shares.
i. The capital infusion of Rs 5,431 crore by the Central government will be through preferential allotment of the bank’s equity shares at a price fixed as per regulation.
ii. Finance Minister Arun Jaitley had committed capital infusion to banks following his meeting with chiefs of public sector banks, on 25th September 2018. 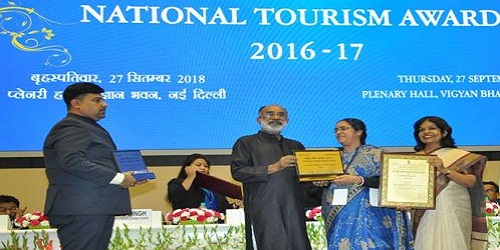 Key Points:
i. K.J. Alphons also launched the ‘Incredible India Mobile App’ developed by Tech Mahindra and the “Incredible India Tourist Facilitators Certification” programme.
ii. He announced that, India will be the host country for official World Tourism Day celebrations for the UNWTO (World Tourism Organization) in 2019.
iii. A total of 77 awards were presented this year to the tourism industry stakeholders, State Governments, central agencies and individuals.
iv. Some important awards are listed below:

Pankaj Kapur to get ‘Icons of Indian Cinema’ Award
Actor-director Pankaj Kapur will presented the ‘Icons of Indian Cinema’ Award at the closing ceremony of the 9th edition of Jagran Film Festival in Mumbai on 30th September 2018.
i. The Jagran Film Festival started in Delhi on 29th June 2018. It then travelled to: Kanpur, Lucknow, Allahabad, Varanasi, Patna, Dehradun, Ranchi, Jamshedpur, Bhopal, Indore, Gorakhpur, Agra, Ludhiana, Hissar, Meerut and Raipur. i. She was 51 years old. She was born in Nanded, Maharashtra. Some of her popular novels are Brr, Bhinna, etc.
ii. She had won Sahitya Akademi translation award in 2011 and Shashikalatai Agashe Award for Children’s Literature in 2013.

World Rabies Day – September 28
On 28th September 2018, World Rabies Day was observed all over the world.
i. When: World Rabies Day is observed every year on 28 September which marks the death anniversary of Louis Pasteur, the French chemist and microbiologist, who developed the first vaccine for rabies.
ii. Why: to create awareness about rabies prevention and to share the progress in fighting this disease.
iii. Theme: for World Rabies Day 2018 is – “Rabies: Share the message. Save a life”.