We are here for you to provide the important current affairs October 10 2017 which have unique updates of all daily events from all newspapers such as The Hindu, The Economic Times, PIB, Times of India, India Today, Indian Express, Business Standard, all Government official websites. Our complete current affairs helps you to get more marks in Banking, insurance, UPSC, SSC, CLAT, Railway and all other competitive Exams. 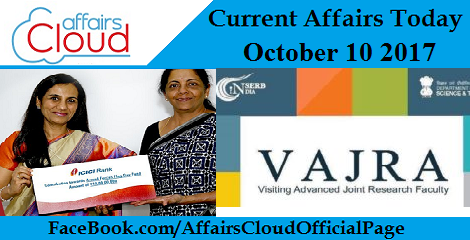 VAJRA faculty scheme – 260 applicants for government’s visiting researcher programme
Central Government has received 260 applications from foreign scientists for Visiting Advanced Joint Research (VAJRA) Faculty scheme. Out of these 260 applications, 70 will be shortlisted for this year.
i. The department intends to select 1,000 scientists every year under this scheme.
ii. Ashutosh Sharma, Secretary of Department of Science and Technology, has stated that screening of 260 applicants will start in October 2017 and the shortlisted scientists will begin work by December 2017…………………Click here to Read more

Gujarat becomes first state to slash VAT on petrol, diesel; cuts taxes by 4 per cent
On October 2017, Gujarat state government announced a 4 per cent reduction in VAT (Value Added Tax) on petrol and diesel. It has thereby become the first state to cut VAT on fuel. 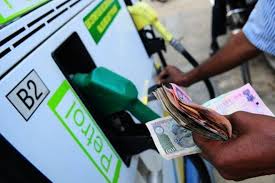 More Details:
i. On account of this decision, petrol will get cheaper by Rs 2.93 and diesel by Rs 2.72 across Gujarat from the midnight of Tuesday and Wednesday.
ii. Recently, after cutting central excise duty on petrol and diesel by Rs. 2, Union Oil Minister Dharmendra Pradhan had asked the state governments to cut VAT on the fuel products by 5 per cent citing that they are the biggest beneficiaries of the revenues generated from petrol and diesel.
iii. Out of the total levy on fuel, state governments get all of the VAT collection along with 42 per cent of the central excise collections.
iv. The remaining portion of excise collections is used by Central Government in centrally sponsored schemes.

Government approved Rs 2,000 crore to set up Aadhaar units in post offices
With an aim to gradually phase out private contractors from the data collection process in Aadhaar enrolment, Central Government has approved Rs 2,000 crore for setting up Aadhaar centres in post offices.
Aadhaar Enrolment and Updation facilities in Post Offices:
i. This decision has been taken as Government received several complaints against private vendors such as petty corruption and attempted frauds.  Moreover Supreme Court too had highlighted reports of alleged leakage of Aadhaar data.
ii. By March 31, 2017, Government will set up Aadhaar enrolment and updation facilities in around 15,000 post offices.
iii. The centres will have machines approved by the Unique Identification Authority of India (UIDAI) and trained personnel who will be responsible for the operations.
iv. Government believes that post offices will considerably extend the reach of UID, particularly in remote areas. 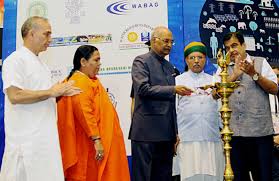 India Water Week 2017:
i. Theme of India Water Week 2017 is ‘Water and Energy for Inclusive Growth’. It is held from 10thto 14thOctober, 2017.
ii. India Water Week 2017 is a platform to discuss ideas with global-level decision makers, politicians, researchers and entrepreneurs in the field of water resources for mutual benefit.
iii. A multi-disciplinary conference is held to discuss the following topics:
1.Water, Food and Energy Security-Essential Requirement for Sustainable Development
2.Water for Inclusive Growth
3.Sustainable Energy Development-Key for All Round Economic Growth
4.Water and Society
iv. Also exhibition showcasing the technologies, latest developments and solutions available for the areas in, water and energy is held.
About India Water Week 2017:
♦ Organised by – Ministry of Water Resources, River Development & Ganga Rejuvenation
♦ Date – 10th– 14th October 2017

House panel headed by Shashi Tharoor to look into China-India relations
On 10th October 2017, the Standing Committee on External Affairs headed by Shashi Tharoor, Congress member of the Lok Sabha, was formed to examine the India-China relations.
Standing Committee to examine India-China relations:
i. The Standing Committee on External Affairs will examine the issue of cooperation between India and China in international organisations.
ii. This move has been made after Congress Vice-President Rahul Gandhi demanded Prime Minister Narendra Modi to explain the resumed road-construction by the Chinese near the Doklam plateau.
iii. The standing committee would also look at India’s “Relations with Myanmar and the Rohingya situation”, the country’s “Act East Policy, including BIMSTEC”, the “Situation in the Far East: Japan and North Korea”, India’s engagement with SAARC countries, global terrorism and voting rights for NRIs.
About Doklam:
♦ Country – claimed by both Bhutan and China
♦ Location – between Tibet’s Chumbi Valley and Bhutan’s Ha Valley 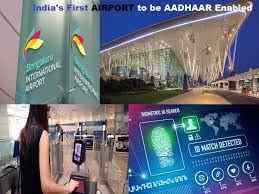 KIA to be the first Aadhaar-enabled airport:
i.Following the two-month trial period in February, , Bangalore International Airport Limited (BIAL) has decided to make KIA fully compliant with Aadhaaar-enabled entry and biometric boarding system.
ii. According to the Request For Proposal (RFP) issued by BIAL, the airport is expected to be completely Aadhaar-enabled by December 2018.
iii. BIAL would use Aadhaar-enabled entry and biometric e-boarding process to confirm personal identity for airport passenger processing and control other things.
iv. The process would verify a passenger within 5 seconds at every checkpoint, completing the screening process in 10 minutes compared to the average 25 minutes.
About Kempegowda International Airport (KIA):
♦ Location – Devanahalli, Karnataka
♦ Owner/Operator – Bangalore International Airport Limited (BIAL)

RBI panel headed by Janak Raj reveals ad hoc, arbitrary practices by banks to inflate interest rates
Reserve Bank of India (RBI) panel on an external benchmark rate for banks headed by Janak Raj, Principal adviser of Monetary Policy Department has submitted its report. As per the report, several disconcerting banking practices, including violation of the RBI guidelines, inflating of base rate and arbitrary adjustment of spreads are prevalent among major banks in India.
i. It has been observed that banks deviated in an ad hoc manner from the specified methodologies for calculating the base rate and MCLR.
ii. This was done either to inflate the base rate and MCLR or prevent it from falling in line with the actual cost of funds………………….Click here to view more detail

ICICI Bank commits Rs 10 cr for welfare of armed forces
As a part of its Corporate Social Responsibility initiative, ICICI Bank has committed a financial assistance of Rs 10 crore to the Indian Armed Forces, which will be utilised for welfare activities and betterment of the families of ex-servicemen who have lost their lives on duty. 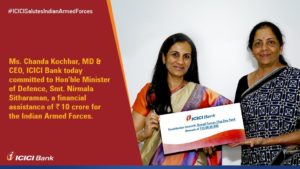 More Information about ICICI Bank’s contribution for welfare of armed forces:
i. This contribution by ICICI Bank would be made in two equal tranches, out of which a cheque worth Rs 5 crore was handed over to Defence Minister Nirmala Sitharaman in New Delhi on October 9, 2017.
ii. This fund will be used for two programmes. The first will support post-graduation education of the widows of the soldiers and education for their wards. The second programme will provide financial assistance for marriages of the daughters of ex-servicemen.
iii. Both the programmes will be administered by Kendriya Sainik Board, the apex body that formulates policies for resettlement and welfare of ex-servicemen and their dependents.
Quick Facts about ICICI Bank
♦ Founded in – 1994
♦ Headquarters – Mumbai
♦ Current MD & CEO – Chanda Kochhar 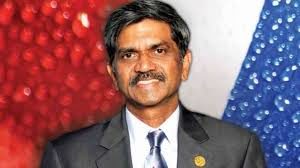 PepsiCo chairman D Shivakumar resigned:
i. Sivakumar will join the Aditya Birla Group as the group executive president in January 2018 and will report directly to Chairman Kumar Mangalam Birla.
ii. Shivakumar has been replaced by Ahmed El Sheikh, Senior Vice President and General Manager for PepsiCo Egypt and Jordan.
iii. Ahmed will take charge as PepsiCo Chairman on 1st November, 2017. Shivakumar will stay with PepsiCo till 31stDecember 2017 as part of the transition process.
iv. Ahmed, who held leadership roles in both foods and beverages businesses, led the Egypt business previously.
About PepsiCo:
♦ Headquarters – Purchase, New York, U.S.
♦ Chairperson and CEO – Indra Nooyi

NABARD buys additional 7% stake in SIDBI from IDBI Bank for Rs 900 crore
Rural financial institution National Bank for Agriculture and Rural Development (NABARD) has bought an additional 7% stake in Small Industries Development Bank of India (SIDBI) for Rs900 crore from IDBI Bank Ltd.
Details about NABARD’s Stake Purchase in SIDBI from IDBI Bank:
i. This is the largest investment made by NABARD so far. Consequential to this move, NABARD’s stake in SIDBI has now gone up to 10%.
ii. Earlier, RBI had invoked prompt corrective action against IDBI Bank due to worsening of financial ratios. Following that, it has been trying to sell its non-core assets, and thereby wanted to sell its entire 16.25% stake in SIDBI since August 2017.
iii. So far it has managed to sell 10% stake which has been picked up by existing shareholder in SIDBI such as NABARD, LIC, Vjaya Bank and Canara Bank.
Quick Facts about NABARD:
♦ Established in – 1982
♦ Headquarters – Mumbai

SpaceX launches 10 satellites for Iridium mobile network
On October 9, 2017, 10 more satellites for the Iridium Satellite Constellation were launched by SpaceX from Vandenberg Air Force Base, California, US. 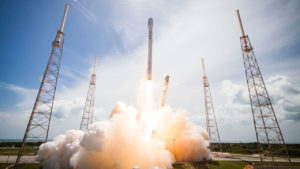 More details about 10 satellites launched by SpaceX for Iridium mobile network:
i. These 10 satellites are part of Iridium satellite constellation which provides voice and data coverage to satellite phones, pagers and integrated transceivers over the Earth’s entire surface. The Iridium constellation is spread around the globe in six orbital planes, and thereby provides worldwide coverage.
ii. The 10 French-designed, U.S.- built satellites were launched by SpaceX Falcon 9 rocket. All the satellites were successfully deployed in the destined orbit after one hour from the launch.
iii. This was SpaceX’s 14th consecutive successful launch since January 2017.
iv. SpaceX and Iridium have entered into agreements for eight launches on Falcon 9 rockets until the constellation is completed in mid-2018.
Quick Facts about SpaceX:
♦ Founded in – 2002
♦ Headquarters – California, US
♦ Current CEO – Elon Musk 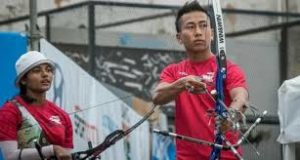 BCCI makes yo-yo tests compulsory criterion for Team India selection
In a bid to make India Cricket team one of the fittest sides in world cricket, the Board of Control for Cricket in India (BCCI) has made it mandatory for cricketers to pass the ‘yo-yo’ endurance test.
About Yo-Yo Endurance Test:
i. In a yo-yo test, players have to pace themselves to and fro between two rows of cones kept 20 metres apart. For every round the player has to sync his sprint with the beeps that are played. Duration between beeps progressively shorten as the test proceeds.
ii. This test is widely used by selection bodies in various sports including hockey, football and cricket. For every sport the performance benchmark in the test may vary.
iii. BCCI CEO Rahul Johri has mentioned that Indian cricketers will have to compulsorily pass the Yo-Yo test for all formats. He stated that this rule will be stringent and non-negotiable. 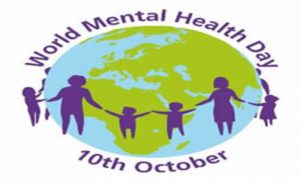