We are here for you to provide the important current affairs June 7 2018 which have unique updates of all daily events from all newspapers such as The Hindu, The Economic Times, PIB, Times of India, India Today, Indian Express, Business Standard, all Government official websites. Our complete current affairs helps you to get more marks in Banking, insurance, UPSC, SSC, CLAT, Railway and all other competitive Exams. 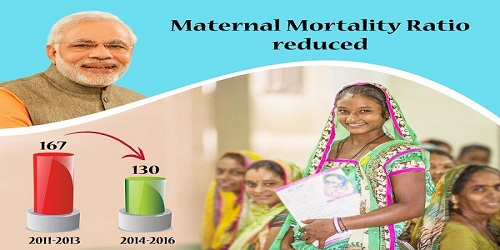 India records 22% reduction in Maternal Mortality Ratio since 2013:
i. MMR has reduced from 167 in 2011-2013 to 130 in 2014-2016. MMR is the proportion of maternal deaths per 1,00,000 live births.
ii. Major reduction in MMR has been seen in Empowered Action Group (EAG) states — from 246 to 188.
iii. Also, the bulletin says that, in the southern states, the decline has been from 93 to 77 and in other states it has been from 115 to 93.
iv. EAG states are: Bihar, Jharkhand, Madhya Pradesh, Chhattisgarh, Odisha, Rajasthan, Uttar Pradesh and Uttarakhand, and Assam.
v. Southern states are: Andhra Pradesh, Telangana, Karnataka, Kerala and Tamil Nadu.
vi. “Other” states are the remaining states and Union territories. As per the Bulletin, there were around 12,000 fewer maternal deaths in 2016 compared to 2013.
vii. The total number of maternal deaths reduced to 32,000 for the first time in 2016.
viii. Uttar Pradesh has topped the list in reduction of maternal deaths with 30 % decline.
ix. Kerala, Maharashtra and Tamil Nadu have already met the SDG target for MMR of 70 per 1,00,000.
x. The survey for this bulletin covered 62,96,101 pregnant women, of which 556 died.
Tag lines of some banks:
♦ Canara Bank – Together we can
♦ Central Bank of India – Central To you Since 1911
♦ Corporation Bank – A Premier Public Sector Bank

Prime Minister to hold ‘Samvad’ with Beneficiaries of Pradhan Mantri Bhartiya Janaushadhi Pariyojna and affordable cardiac stents and knee implants on June 7
On June 7, 2018, Prime Minister Narendra Modi hold a video conference on Pradhan Mantri Bhartiya Janaushadhi Pariyojona (PMBJP) and affordable Cardiac Stents and Knee Implants .
Key points:
i. The aim of the ‘Samvad’ or interaction was to get the feedback and to know the progress of the schemes for the poor patients .
ii. The ‘Samvad’ session would be uploaded to all the social media platforms like YouTube, NAMO App etc.

Ministry of Water Resources accepts two major irrigation and four flood management projects from six states
On June 7, 2018, The Advisory Committee under the Ministry of Water Resources, River Development and Ganga Rejuvenation approved 2 major irrigation/multipurpose projects and 4 flood management schemes/master plans with a cumulative cost of Rs. 84,748 crore from six States/ UT in its meeting held in New Delhi.
The meeting was set the chairmanship of Shri U P Singh, Secretary,Ministry of Water Resources, River Development and Ganga Rejuvenation.
Key points :
About the two major projects:
i. The Kaleswaram Project is of Telengana .
ii. It’s estimated cost is Rs.80190.46 crore.
iii. It would divert 195 TMC (5522 Million Cubic Meter) of Godavari water to irrigate about 18.25 lakh acres of land in 13 districts (out of total 31 districts) of Telangana.
iv. It will provide 40 TMC (1133 MCM) of drinking water to Hyderabad, Secundarabad and villages enroute and 16 TMC (453 MCM) of industrial water.
v. The Upper Pravara (Nilwande-II) Project is of Maharashtra.
vi. The estimated cost is Rs.2232.62 crore.
vii. It will irrigate an area of 2,12,758 acres .
viii. It will also provide drinking water to the tune of 13.15 MCM.
About the Flood Management Projects:
i. The Mahananda Flood Management Scheme (Phase-II) of Bihar.
ii. SeerKhad Project of Himachal Pradesh.
iii. Yanam Flood Protection Works of Union Territory Puducherry.
iv. Ghatal Master Plan (Phase-I) of West Bengal.
v. These projects will provide flood protection to about 13,58,000 persons and save about 4,51,750 acres  of area from flooding. 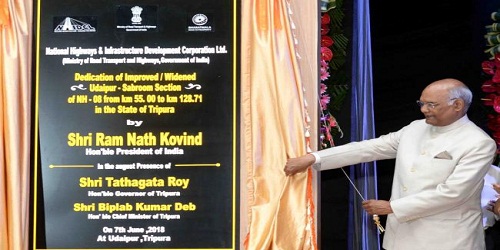 i. This national highway will connect Matabati to Udaipur-Sabroom.
ii. This was constructed in 30 months.
iii. This will help in infrastructure development. 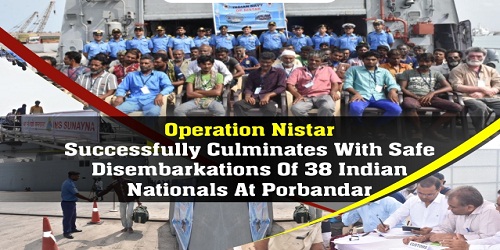 Key points:
i. This was done as a part of Humanitarian and Disaster Relief Exercise (HADR) and was code named ‘NISTAR’
ii. This was in wake of the devastation caused by Cyclonic storm – Mekunu that left 38 Indian nationals stranded for 10 days in the island .
iii. The INS vessel docked at Socotra from the Gulf of Aden for search and rescue operations.

Shri Ashwani Lohani, Chairman, Railway Board launches ‘Awareness Campaign on Protection of Children in contact with Railways’ as a Joint Initiative with NCPCR and Railway Children of India
On June 7, 2018, Shri Ashwani Lohani , Chairman, Railway Board has launched a document called “ Guidebook for creating a child friendly and protective environment for children in contact with Railways” developed by National Commission for protection of Child Rights (NCPCR) .

Objective :
The need to protect children who have run away from abusive situations at home or are lost and have reached railway platforms as they are extremely vulnerable to abuse by strangers.
Key points :
i. This was launched at an event in collaboration with Railway Children India at the Habitat World.
ii. Information Education Communication (IEC) Materials on child protection was launched in association with Save the Children to create awareness among stakeholders and people.
iii. The aim of this event is to create awareness about the care and protection of distressed children and a mass campaign would be launched on 8th June 2018.

CM of Odisha announces welfare measures for working journalists under GSSBJ
On June 7, 2018, After the announcement of the ‘Gopabandhu Sambadika Swasthya Bima Jojona’ of the Odisha government for the health insurance of working journalists, a few extra measures were taken .
Key points:
i. An assistance of Rs. 4 lakh to the family of the journalist in the event of death.
ii. Assistance for the treatment of any critical illness that is beyond the expenditure of Rs. 2 lakh.
iii. Three per cent interest subvention each up to Rs 25 lakh house building loans,four wheeler loan up to Rs 4 lakh and two wheeler loan upto Rs 50,000 will be released annually.
iv. The subvention would be released annually after the repayment of regular installments and interests.
v. Assistance of Rs. 2 lakh in  the event of permanent incapacitation.
vi. Assistance in education for children of deceased working journalist will be provided at the rate of Rs 1500 per month and Rs 2500 per month for higher studies.
vii. 3 days/1 week/2 week training of minimum 25 and maximum 35 journalists within the state in institute like IIMC, training cost upto Rs 10,000 per journalist, to be borne by the government.
viii. These measures would be implemented by information and public relations department.

Myanmar, UN sign pact on steps for Rohingya return
On 6th June 2018, Myanmar and U.N. agencies signed a MoU for the eventual return of some of the 700,000 Rohingya Muslims who fled from Myanmar due to brutal attacks of Mynamar’s security forces and have camped now in Bangladesh.
Myanmar, UN sign pact on steps for Rohingya return:
i. The MoU promises to develop a framework of cooperation aimed to create conditions for voluntary, safe, dignified and sustainable return of Rohingya refugees.
ii. The agreement does not mention about Myanmar’s denial of citizenship for the minority.
iii. Myanmar’s security forces have been accused of rape, killing, torture and the burning of Rohingya homes in western Rakhine state. Most of the Rohingyas lived in this region.
iv. In November 2017, Myanmar and Bangladesh agreed to repatriate Rohingyas. But refugees feared to return to Myanmar without international monitoring, as their life would be at risk.
v. Knut Ostby, U.N. Resident and Humanitarian Coordinator in Myanmar, has said that, this agreement is an important first step in resolving this issue.
vi. The U.N. has said that, the agreement offers its refugee and development agencies access to Rakhine state.
vii. It would allow the refugee agency to assess the situation and inform refugees about conditions in their areas of origin, so that the refugees can decide whether to return or not.
Some important stadiums in India:
♦ Buddh International Circuit – Greater Noida, Uttar Pradesh
♦ Salt Lake Stadium – Kolkata, West Bengal
♦ DY Patil Stadium – Navi Mumbai, Maharashtra 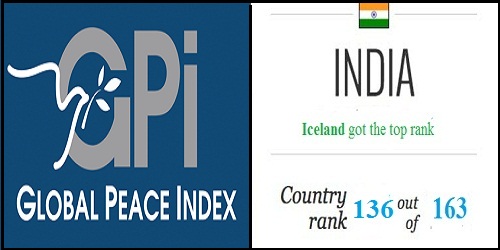 Key points:
i. The number of countries ranked is 163.
ii. In 2017 Global Peace Index ,India placed at 137th from 141st due to the reduction in violence caused by the enforcement of new laws.
iii. Iceland got the top rank . It has been ranked the most peaceful country from 2008.
iv. New Zealand is 2nd , Austria is 3rd , Portugal is 4th and Denmark is 5th.
v. The 5 least peaceful countries are:Afghanistan (162nd ), South Sudan, Iraq and Somalia. Syria being the least peaceful country ranking 163rd.
vi. India was also among the countries with the biggest decreases in the number of deaths, along with Sri Lanka, Chad, Colombia, and Uganda.
vii. Countries like Egypt, India, Iran, Pakistan, South Korea, and Syria has had an increase in heavy weapon capabilities in the past 30 years. 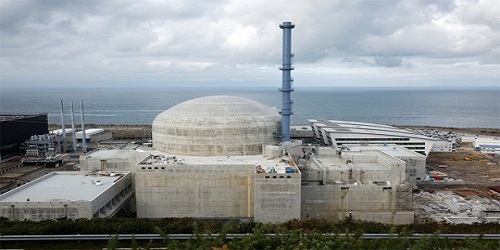 Key points:
i. It has third generation European technology.
ii. It is being managed by China General Nuclear Power Corporation .
iii. There are two reactors called : Taishan 1 and Taishan 2 and are of the same technology as EPRs in France and Finland. Taishan 1 will commence in a few weeks and Taishan 2 will start from 2019.
iv. This project is in Guangdong province and is 51% owned by CGN , 30% owned by EDF and 19% owned by the region’s electrical utility firm.
v. Another reactor in the Hinkley Point in southwest England is being built by EDF and CGN and will be operational in 2020.

RBI eases GST registered MSME repayment norms for 180 days till December 31st 2018
On June 7, 2018 ,RBI announced a relaxation of 180 days for MSMEs who are not classified as ‘Non-Performing’.
Key points:
i. MSMEs which were standard as on August 31, 2017, shall continue to be classified as standard by banks and NBFCs if the payments due as on September 1, 2017, and falling due thereafter up to December 31, 2018, were paid not later than 180 days from their original due date .
ii. Banks and NBFCs have to typically classify a loan as a non-performing asset if the repayment has been delayed beyond 90 days.
iii. This has been done as a result of the effect of GST on the small and medium enterprises.
iv. After January 2019 the rules will fall back to the normal 90 day regime for the GST registered MSMEs.

Kohli to get cricketer of the year award at BCCI annual gala
India cricket captain Virat Kohli will be presented the Polly Umrigar Award for the best international cricketer (2016-17 and 2017-18)at the BCCI Awards that will be held in Bengaluru on 12th June 2018.
BCCI Awards:
i. Harmanpreet Kaur and Smriti Mandhana will be awarded the best international cricketer (women) for the 2016-17 and 2017-18seasons respectively. They will be the first recipients of this award.
ii. Virat Kohli will be awarded a prize money of Rs 15 lakh for each season in the men’s category.
iii. To honour former BCCI President Jagmohan Dalmiya, BCCI has renamed four awards in his name.
iv. Jagmohan Dalmiya Trophy will be awarded to the top run-scorer and wicket-taker in the U-16 Vijay Merchant Trophy and to the Best Junior and Senior Cricketer in women’s cricket.
v. BCCI has increased prize money for 9 categories by Rs. 1 lakh and it is finalised at Rs. 1.5 lakh now.
vi.BCCI has conferred the lifetime achievement award (2016-17) on late Pankaj Roy.
About Board of Control for Cricket in India (BCCI):
♦ CEO – Rahul Johri
♦ Headquarters – Mumbai 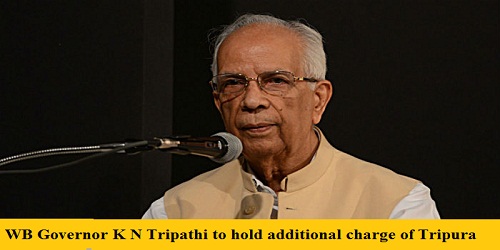