We are here for you to provide the important current affairs July 8 2018 which have unique updates of all daily events from all newspapers such as The Hindu, The Economic Times, PIB, Times of India, India Today, Indian Express, Business Standard, all Government official websites. Our complete current affairs helps you to get more marks in Banking, insurance, UPSC, SSC, CLAT, Railway and all other competitive Exams. 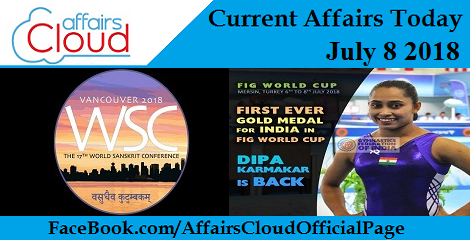 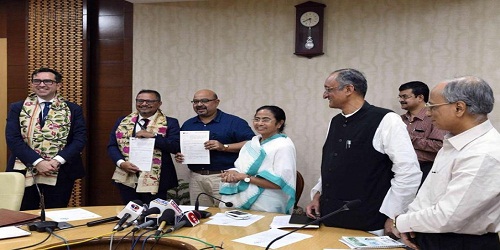 British Council’s 70th anniversary in India
Due to the British Council’s 70th anniversary in India , it is focused on English language training in the school system and higher education ,Research collaboration and capacity building in higher education and cultural collaboration between the UK and the state.
Salient features o this MoU
i. Celebration of Durga Puja in Britain during Thames Festival and similarly hosting of a River Festival in Kolkata to the Thames.
ii. Exchanging visitors between Britain and Bengal for cultural exchanges.
iii. Communication Skill development in English and enrichment of employability of youth. 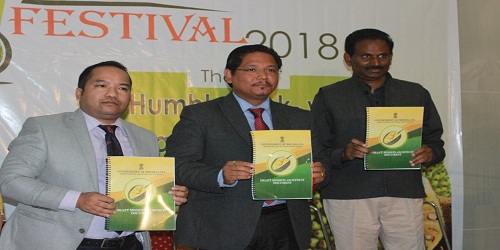 i. Jackfruit Mission is one of the flagship programmes of the government that encourage entrepreneurial activities and help the farmers of the state to generate additional income from the fruit.
ii. It is Rs.80 crore investment project mission over a period of five years. Rs 42.6 crore will be sourced from the Mission for Integrated Development of Horticulture (MIDH) and Rs 6.3 crore from the Union Ministry of Food Processing Industries and Rs 30.2 crore from the state government.
iii. Department of Agriculture organized the First state level Jackfruit Fruit Festival 2018 with the theme “The Humble Jack”.
iv. It will help over 82000 farmers , 50 small and medium enterprises and about 200 nano enterprises.
Few Facts about Meghalaya
i. Meghalaya means “abode of the cloud” in Sanskrit and its capital Shilong is known as “Scotland of the East”.
ii.It is a part of Seven sister states of North Eastern India.Its official language is English and other languages are Khasi,Garo Pnar, Biate Hajong and Bengali.
iii. India’s longest cave is located in Jaintia Hills in the state of Meghalaya.

Haryana CM launches plantation campaign
On July 6 2018 ,Haryana Chief Minister Manohar Lal Khattar launched a state-wide plantation campaign from the Narwana sub-division of the district.It would be carried out from July to August this year.
i. School students from class 6 to 12 would plant one sapling each during the rainy season and   also be responsible to take care of these plants.
ii. After every six months, the plants would be inspected and Rs 50 would be given for three years after every six months for the maintenance or for providing manure to their plants.

Gorakhpur launches ‘Stop JE/AES’ mobile app to check encephalitis
On 6th July 2018, the Gorakhpur administration in Uttar Pradesh launched an android based smart phone application named ‘Stop JE/AES’ to combat encephalitis.
Stop JE/AES:
i. Encephalitis claims the lives of hundreds of children every year in eastern parts of Uttar Pradesh.
ii. The ‘Stop JE/AES’ app enables users to avail immediate medical help by just pressing a button. This app was launched by Divisional Commissioner Anil Kumar and DM Vijyendra Pandian.
iii. This app is available on Google Play Store. It could be used on any smart phone even without internet. This app aims to provide timely medical assistance to people in remote areas.
iv. By pressing the help button in the app, an alert will be sent to the control room. Then they would call back on the number to collect the details about the patient.
v. As a first response, auxiliary mid wives (ANMs) will reach out to help the patient who will be taken to a nearby community health centre (CHC)/ primary health centre (PHC) or hospital through 102 or 108 ambulance services.
vi. For encephalitis patients, the first 48 hours is very crucial. Using this app, the patient can be taken to hospital without any delay.
vii.Also, during treatment, automatic alerts will be sent to the CMO’s (chief medical officer) office. Hence, concerned health officials can help the patient.
viii.The app will be launched in all affected districts if it is successful in Gorakhpur.
ix. A software called Rashtriya Bal Suraksha Karyakaram (RBSK) that will display details of children referred to the CHCs/PHCs and hospitals on CMS portal was also launched on the occasion.
Some wildlife sanctuaries in Uttar Pradesh:
♦ Sohagi Barwa Sanctuary
♦ Suhelva Sanctuary
♦ Vijai Sagar Sanctuary 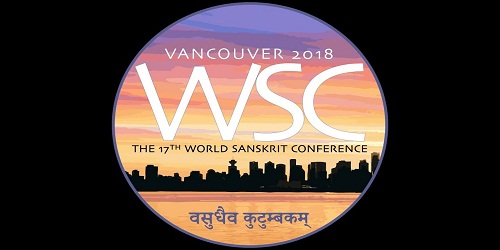 Purpose :- to promote, preserve and practice the Sanskrit language all over the world by the people.
i. There are more than 500 scholars and delegates from over 40 countries will be expected to participate in this conference.
ii. All the scholars and delegates will exchange their knowledge on various section like History & Education of Women in Vedic Literature; Sanskrit Buddhist Manuscripts; Mimamsa Beyond the Yagasala; The Yuktidipika Forging a Place for Sankhya Introducing Bhagavata Purana Commentaries; Research on the Gargiyajyotisa.
iii. Along with minister 10 scholars and two officers are Indian delegation participating in the 17th World Sanskrit Conference. 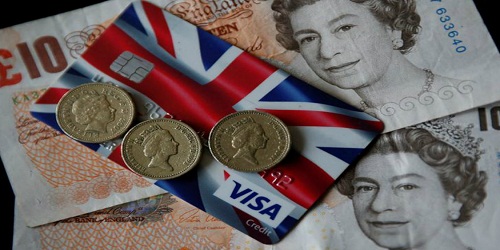 UKRI Science, Research and Academia scheme:
i. The new UKRI Science, Research and Academia scheme is for researchers, scientists and academics to come to the UK for up to 2 years.
ii. This route allows individuals entering the UK through this scheme to stay for up to 2 years.
iii. The new UKRI Science, Research and Academia scheme is added to the existing Tier 5 (Temporary Worker – Government Authorised Exchange) visa route.
iv. This scheme will be operated by UK Research and Innovation (UKRI). UKRI comprises UK’s 7 research councils, Innovate UK and Research England.
v. UKRI, together with 12 approved research organisations can now directly sponsor highly skilled individuals, like specialist technicians, to work and train in the UK.
v. The sponsor organisations will be monitored by UKRI as the scheme owner. They will also need individual Tier 5 sponsor licences.
vi. The Tier 5 Government Authorised Exchange (GAE) is the main visa route by which professionals from outside the European Economic Area enter UK for training and work experience.
vii. The UK’s Department for Business, Energy and Industrial Strategy (BEIS) will monitor the activity of the scheme on a regular basis along with UKRI. The visa launch was announced by UK immigration minister Caroline Nokes.
Tag lines of some banks:
♦ Allahabad Bank – A tradition of trust
♦ Andhra Bank – Where India Banks
♦ Bank of Baroda – India’s International Bank

RBI cancels licence of Alwar Urban Co-operative Bank
The Reserve Bank of India (RBI) announced that the licence of Alwar Urban Co-operative Bank in Alwar, Rajasthan has been cancelled due to its bad position to pay its depositors in full and the present financial position of the bank leaves no scope for its revival.
i.It is effective from the close of business on July 5 2018.
ii. Registrar of Co-operative Societies, Rajasthan has also been requested to issue an order for winding up the bank and appoint a liquidator for the bank.

Infosys foundation to contribute Rs. 200 Cr for metro work
On July 7 2018, Chief minister HD Kumaraswamy informed that Infosys Foundation would contribute Rs 200 crore to the Bengaluru Metro Rail Corporation Ltd for construction of Konappana Agrahara Metro Station and metro railway track.
i. Dr Sudha Murthy, Chairperson, Infosys Foundation, would maintain the station for the next 30 years.
ii. Bengaluru Metro Rail Corporation Ltd has allocated Rs 100 crore for construction of the Konappana Agrahara Railway Station.
iii. The estimated cost of the elevated rail network project is Rs 1,794 crore and it is expected to be completed by mid-2021.

Swedish intellectuals form new literature prize in Nobel protest
Over 100 Swedish intellectuals have joined together and formed The New Academy a new prize-giving body to award a new literature prize as this year’s Nobel Literature Prize has been postponed.
Swedish intellectuals form new literature prize in Nobel protest:
i. This has been created after the Swedish Academy that selects Nobel laureates, postponed this year’s Nobel Literature Prize due to sexual assault allegations.
ii. The New Academy consists of authors, artists and journalists as members. In 2017, the Swedish Academy got into trouble after the #MeToo movement gained significance globally, and local media published the testimonies of 18 women claiming to have been raped, sexually assaulted or harassed by a French man who has been connected to the institution.
iii. Following this, in May 2018, the Swedish Academy announced that, there will be no Nobel Literature Prize this year.
iv. This was the first time in almost 70 years the Nobel literature award has been postponed. The Swedish Academy was founded in 1786. Its meetings and decisions on prizes are kept secret.
v. But the New Academy has planned to make its prize-awarding process transparent.
vii. The new literature award carries a prize of 1 million kronor (around 97,000 euros, USD 113,000).
viii. The prize money has been raised from crowdfunding and donations. It will be presented at a ceremony on 10th December 2018, on the same day as the Nobel banquet.
ix. Librarians across Sweden have been asked to nominate up to 2 authors. Deadline for nominations is 8th July 2018.
x. Authors with the most nominations will receive votes online from the public in Sweden and abroad.
xi. Based on the nominations and the vote results, a jury of publishers, literature professors, culture journalists and critics will shortlist 4 authors: 2 men and 2 women and make the final choice.
x. The winner should have published at least one literary work in the last 10 years. The winner will be announced on 14th October 2018, in the same month as the Nobel Literature Prize would have been announced.
Some important lakes in India:
♦ Sursagar Lake – Gujarat
♦ Thol Lake – Gujarat
♦ Vastrapur Lake – Gujarat

Uday Kumar Varma appointed BCCC member
Uday Kumar Varma has been appointed a member of the Broadcasting Content Complaints Council (BCCC).
Uday Kumar Varma – BCCC member:
i. Uday Kumar Varma is a former Information and Broadcasting secretary. He is a former IAS officer of 1976 batch from the Madhya Pradesh cadre. He was also a member of the Central Administrative Tribunal (CAT).
ii. He succeeds Wajahat Habibullah, whose term at the BCCC has ended recently. Wajahat Habibullah is a former information commissioner.
About Broadcasting Content Complaints Council (BCCC):
♦ Purpose – a self-regulatory body for general entertainment channels
♦ Members – 13
♦ Chairperson – former Supreme Court judge Justice Vikramajit Sen
♦ Some of its members – actor Sharmila Tagore, theatre person Arundhati Nag, JNU professor Ira Bhaskar and representatives of the National Commission for Women, National Commission for the Protection of Child Rights and the National Commission for Minorities, etc. Justice A K Goel retires from Supreme Court
On 6th July 2018, Justice Adarsh Kumar Goel retired as a Supreme Court judge.
Retirement of Justice A K Goel:
i. Justice A K Goel was the first person from Haryana to become a Supreme Court judge.He has been appointed as the new Chairperson of the National Green Tribunal (NGT)
ii. He took up various social and religious issues like triple talaq, abuse of the SC/ST Act and safeguards for women in matrimonial disputes.
iii. Recently, he put forth a major order directing the Jagannath temple management to consider allowing every visitor, irrespective of their faith, to offer prayers.
Some important temples in India:
♦ Amarnath Temple – Jammu and Kashmir
♦ Meenakshi Temple – Madurai, Tamil Nadu
♦ Mahakaleshwar Temple – Ujjain, Madhya Pradesh 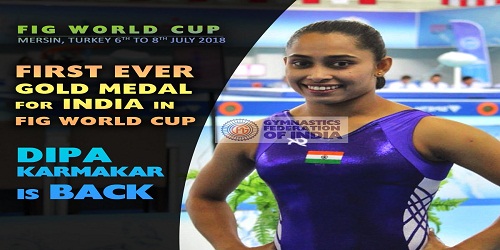 i. Rifda Irfanaluthfi of Indonesia clinched the silver and Goksu Uctas Sanli took the bronze.
ii. Dipa had finished fourth in vault event in the 2016 Rio Olympics.

Senior Congress leader M M Jacob passes away
On 6th July 2018, senior Congress leader and former Meghalaya Governor MM Jacob died due to age-related ailments, at a private hospital in Pala near Kottayam, Kerala.
Death of M M Jacob:
i. M M Jacob is a former Union Minister. He had also served as deputy chairman of the Rajya Sabha.
ii. He hailed from Ramapuram in Kottayam district, Kerala. He had also worked as general secretary and treasurer of Kerala Pradesh Congress Committee and Chairman of Kerala State Seva Dal Board and an elected member of AICC (All India Congress Committee).
Some National Parks in Kerala:
♦ Silent Valley National Park
♦ Anamudi Shola National Park
♦ Eravikulam National Park