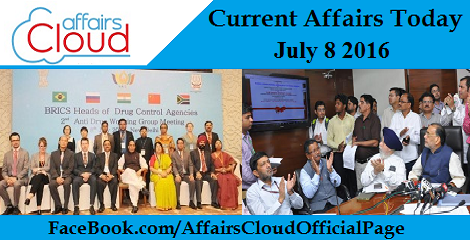 SWACHH BHARAT MISSION – Government to clean 10 Iconic Places in India
Union ministry is in the process of selecting 100 iconic places for cleaning under the mission and most will be either tourist or religious spots.
Drinking Water, Sanitation & Rural Development Minister Narendra Singh Tomar inaugurated a Two Day National Workshop on Special cleanliness of 100 Iconic Places of India in New Delhi.
Central Government will implement a cleaning drive to clean 10 iconic places in our country.
Once this pilot project is completed, the govt will carry out a similar cleanliness drive at the remaining 90 places.

Shri Rajnath Singh inaugurates the BRICS Heads of Drug Control Agencies Working Group Meeting in New Delhi
Union Home Minister Shri Rajnath Singh inaugurates the second anti-drug Working Group meeting of Heads of Drug Control Agencies of BRICS countries in New Delhi.
♦ The meeting is being organized by the Narcotics Control Bureau (NCB).
♦ The seventh BRICS summit was held in July, 2015 in Russia and India shall be hosting the eighth BRICS summit in October, 2016 in Goa.

monitor nearly 645 Krishi Vigyan Kendras (KVKs) across the country.
ii. The KVKs also known as known as farm science centres which have a mandate to assess agri-technology and demonstrate to farmer’s application and capacity development, are being set up in rural districts.
iii. The centres will play a key role in broadcasting farm information at the grassroots level, the government is making efforts to strengthen them with a budget provision of Rs.300 crore.
iv. The portal will have a facility for online monitoring of KVKs, which comprises submission of monthly reports.

Prestigious Survey ‘SMART PULSE’ Launched in Andhra Pradesh
i. Andhra Pradesh Chief Minister N. Chandrababu Naidu launched the State government’s prestigious ‘Smart Pulse’ socio-economic survey at his residence in Undavalli, Guntur district on Friday.
ii. This survey is flagged off to collect socio-economic data of 1.48 crore households in the state.
iii. The first phase of the survey will commence on July 8 with enumerators collecting details of Chief Minister N Chandrababu Naidu at his riverfront residence at Vundavalli near Vijayawada.
iv. The state Cabinet on June 1 decided to conduct the survey to determine the socio-economic status and collect all other relevant details of each household in the state. Revenue and civic staff would go round the houses and collect the data.
v. Citizens could provide their details over the Internet as well. The state government appointed senior IAS officers on Wednesday, who previously served as Collectors, as nodal officers for the 13 districts to oversee the survey.

India sets up apparel training centre in Nigeria
i. India in partnership with Nigerian government is planning to set up an apparel training centre in Nigeria to support textiles industry of the West African country. This is a first of its kind centre in Nigeria.
ii. The centre has been built in Kaduna, Nigeria under the Cotton Technical Assistance Programme for Africa which is being implemented by the Indian Department of Commerce.
iii. The move expected to support and catalyze cotton and textile value chain and address the need for skilled workforce for domestic as well export-oriented apparel industry in the West African region.
Nigeria
♦ Capital: Abuja
♦ Currency: Nigerian naira
♦ President: Muhammadu Buhari

Petronet LNG plans Rs 5000 crore terminal in Bangladesh
i. Indias biggest gas importer Petronet LNG Ltd is planning to set up Rs 5000 crore LNG import terminal at Kutubdia islands in Bangladesh.
ii. The company planned to construct 5 million tons per annum capacity LNG import terminal.  The company also mulling to set up 1 MT LNG terminal in Sri Lanka to meet local demand.
iii. The company is at the forefront of India’s all-out national drive to ensure the country’s energy security in the years to come. The terminal, to be set up on the build-own-operate basis, will supply gas to power plants. 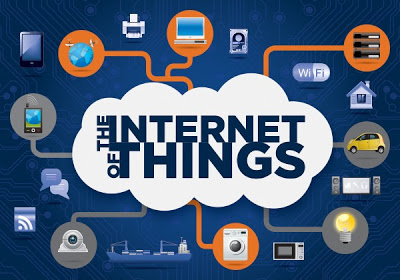 i. Trade body National Association of Software and Services Companies unveiled India’s first centre of excellence focused on Internet of Things (CoE– IoT).
ii. The centre of excellence is set up at the Nasscom Start-ups Warehouse in Bengaluru. The centre is a joint initiative between the Department of Electronics and Information Technology (DEITY), education and research network (ERNET) and the IT industry body.
iii. The move will function as an enabler of funding, accelerating, and mentoring for start-ups and has the capacity to incubate up to 40 start-ups.

AVAST and AVG Join Security Forces in $1.3 Billion Deal
i. Avast Software will acquire AVG Technologies for $1.3 billion in a deal which is going to re-shuffle the security software deck.
ii. The deal gives Avast a substantial combined portfolio of security products
iii. Founded out of Czechoslovakia in the early 1990s — initially called Grisoft — AVG has grown to become one of the biggest brands in desktop and mobile security apps. It also offers a range of related services, including AVG Cleaner for Android and Mac. The company is now headquartered in Amsterdam.
iv. Avast is acquiring AVG to gain scale, technological depth, and geographical breadth and the transaction is expected to close between Sept. 15 and Oct. 15.
v. Now, the combined company will have access to “400 million end users” — that is, devices that have some form of Avast or AVG application installed.

Double Dhamaka Prize Money( $40,000) for UNESCO KALINGA PRIZE
i. The Odisha government has decided to double the prize money of Unesco Kalinga Prize-2017 to $40,000
ii. The Kalinga Prize was established in 1951 by United Nations Educational, Scientific and Cultural Organisation (UNESCO) with a generous grant from Biju Patnaik, the founder-president of the Kalinga Foundation Trust.
iii. The Kalinga Prize is given to a person(s) who make outstanding contribution to the interpretation of science and technology to the general public
iv. Following a proposal of the Union Ministry of Science and Technology, the increase in the prize money was approved at a meeting chaired by Odisha Science and Technology Minister Pradeep Kumar Panigrahi.
v. It is noted that Argentinian scientist Diego Andres Golombek received the UNESCO Kalinga Prize 2015.
About Biju Patnaik:
♦ Bijayananda Patnaik aka Biju Patnaik, was an Indian politician and Chief Minister of Odisha for two terms.
♦ Biju Patnaik’s younger son, Naveen Patnaik, is the current Chief Minister of Odisha.
♦ Famous Projects headed by Biju Patnaik include Paradip Port, Cuttack-Jagatpur Mahanadi highway bridge, Biju Patnaik International Airport, NALCO (National Aluminum Company), Talcher Thermal Power Station etc.,
♦ Paradip Port – Jagatsinghpur, Odisha
♦ Biju Patnaik International Airport – Bhubaneswar, Odisha gifting her the 1st anniversary edition of Indian Car of The year – Creta.
ii. The vehicle was gifted to the Olympic bronze medalist celebration of her winning the Australian Open Championship in Sydney last month.
iii. It is noted that the athlete having won Arjuna Award, Rajiv Gandhi Khel Ratna, Padam Shri and Padam Bhushan.

Vishal Kapoor to be the new CEO of IDFC MF
i. IDFC Mutual Fund has named Vishal Kapoor as its chief executive officer, who would assume charge from September this year.
ii. Presently he is a senior executive from Standard Chartered Bank. Vishal has over two decades of rich experience in Financial Services across functions and businesses.
iii. Kapoor is a management graduate from IIM­Ahmedabad and a Bachelor of Commerce (Honours) from St. Xavier’s College, Kolkata. i. Senior NCP leader Ramraje Naik Nimbalkar will be formally re-elected as the Chairman of Maharashtra Legislative Council.
ii. His current term came to an end his election to the post of Presiding Officer is a mere formality as he has the support of Congress too.
iii. The post lying vacant after the incumbent Vasant Davkare, of NCP, suffered a shocking defeat in the Council polls from the Thane local body constituency at the hands of Shiv Sena’s Ravindra Phatak last month.

Srini Gopalan quits Bharti Airtel, set to join Deutsche Telekom
i. Bharti Airtel’s Consumer business director Srini Gopalan set to quit the company and to join Deutsche Telekom as a member of new board management for Europe business.
ii. Gopalan was the in charge of increasing data usage by Bharti’s subscribers. He had joined Bharti in 2013 from Vodafone UK, where he was working as the director for consumer business.
Srini Gopalan:
♦ Gopalan is alumni of Indian Institute of Management, Ahmedabad. He began his career with Capital One, a US-based financial services company.

NASA’s Next Airborne Mission unveiled to Study Earth Atmosphere
i. order to map the contours of the Earth’s atmosphere to discover how much pollution exists in the most remote corners of the planet and assess how the environment has changed, NASA is going to unveil a new airborne mission.
ii. The Atmospheric Tomography (ATom) mission is the first to survey the atmosphere over the oceans.
iii. Scientists aboard NASA’s DC-8 flying laboratory will journey from the North Pole south over the Pacific Ocean to New Zealand and then across to the tip of South America and north up the Atlantic Ocean to Greenland.
iv. Researchers found that pollutants emitted to the atmosphere – soot, hydrocarbons, nitrogen oxides – are dispersed over the whole globe, but remote regions are cleaner, by factors of 1000 or more, than areas near the continents.

Rajkot hockey ground gets FIH recognition
i. The Major Dhyanchand Hockey Ground in Rajkot, has received recognition from the International Hockey Federation (FIH).
ii. The ground owned by Rajkot Municipal Corporation (RMC) that has become the first hockey ground in Gujarat to have the FIH approval. Besides Rajkot, there are only 30 grounds in the country that have FIH recognition.
iii. The local civic body spent around Rs 5 crore to develop the ground, which was built within a year.
International Hockey Federation:
♦ Inception: 7 January 1924
♦ Headquarters:Lausanne, Switzerland 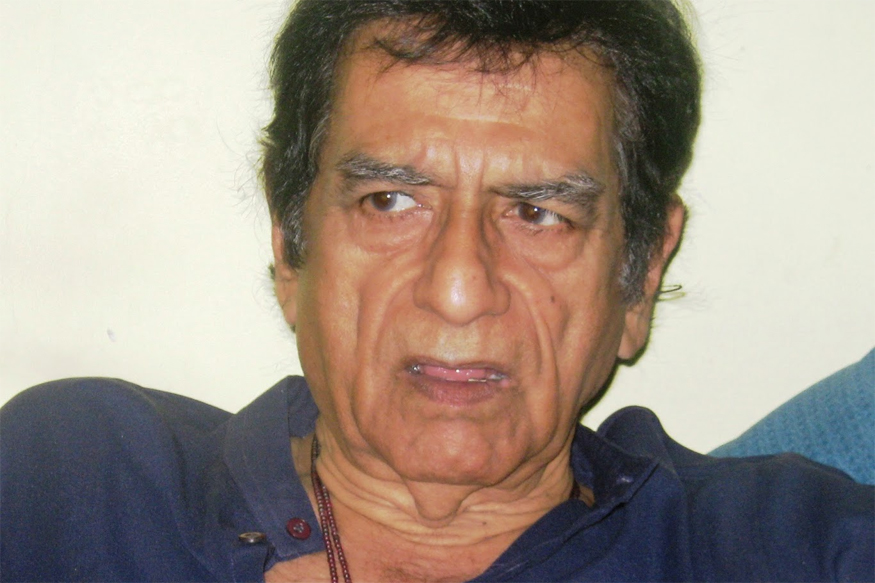 Omi passed away in Mumbai due to a brief illness. He was 77 at the time of his death.
ii. Omi was the nephew of the blind music director Master Sonik and together they formed the noted Sonik-Omi team which provided music to nearly 125 Bollywood movies in the 1950-1980s.
iii. Till the end, he remained active with The Indian Performing Right Society Ltd, which ensures royalties for all performers.
iv. In the past few years, Omi largely remained away from Bollywood but composed certain non-film and private albums, religious music and other genres of music.