We are here for you to provide the important current affairs July 29 2018 which have unique updates of all daily events from all newspapers such as The Hindu, The Economic Times, PIB, Times of India, India Today, Indian Express, Business Standard, all Government official websites. Our complete current affairs helps you to get more marks in Banking, insurance, UPSC, SSC, CLAT, Railway and all other competitive Exams. 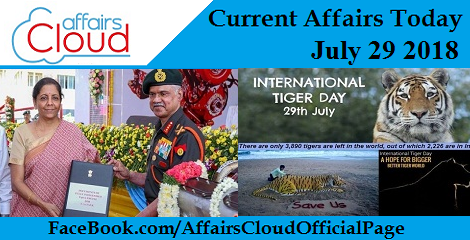 About NSTI:
i. The cost of the project is Rs.17 crores.
ii. This is the first NSTI Institute for Punjab and is exclusively for women.
iii. It would be developed into “Trainers Training Institute” which will give training in traditional areas for women like beauty care, cosmetology & fashion design and also in technology.
Other announcements:
i. He also launched a first of its kind unique Pradhan Mantri Kaushal Kendra (PMKK) for differently abled persons in Mohali.
ii. He also launched India’s first  in-phone guide and mobile application “Go whats That”  in Chandigarh.
Background:
These projects have been built under the Centre’s “Skill India” initiative.
About Skill India:
Skill India is a campaign launched by Prime Minister Narendra Modi on 15 July 2015 which aim to train over 40 crore people in India in different skills by 2022. 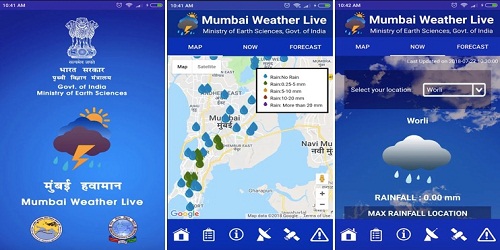 i. It would cover alerts on events like : Heat waves, thunderstorms, heavy rains.
Other announcements:
i. It also launched forecasts for Char Dham and Amarnath pilgrims that can be accessed by registered users of through website of IMD orMapmyIndia.
ii. It has also launched an air-pollution emergency prediction system which could be ready for launch by October 2018.
iii. It would provide:  monsoon forecasting, weather or climate parameters, ocean state, earthquakes, tsunamis and data related to earth systems for public safety.
iv. The Ministry with National Disaster Management Authority (NDMA) would also launch ‘push SMS alerts’ for mobile users across the country.
v. The technology for this has already been approved in Uttarakhand and Andhra Pradesh.
IMD:
♦ Headquarters: New Delhi.
♦ Founded: 1875.
NDMA:
♦ Founded: 30th May 2005.
♦ Parent Ministry: Ministry of Home Affairs.

Srikrishna panel recommends changes in Aadhaar Act; moots new safeguards for data protection & changes in RTI Act
On 27th July 2018, the high-level panel on data protection framework headed by Justice B N Srikrishna submitted its report to the government.
Srikrishna panel recommendations:
i. The panel submitted its report to IT Minister Ravi Shankar Prasad. It has suggested steps for safeguarding personal information, defining obligations of data processors, rights of individuals, and penalties for violation.
ii. Ravi Shankar Prasad said that the report will go through inter-ministerial consultations and Cabinet and parliamentary approval.
iii. The report focuses on 3 aspects: citizens, the state and the industry. The report covers issues like consent, rights of children, data protection authority and right to recall data.
iv. The panel has recommended 2 changes to the Aadhaar Act. Amendments have been suggested to classify requesting entities into 2 kinds to regulate access to personal data on the basis of necessity:

v. It has said that, amendments are required to ensure the autonomy of the UIDAI.
vii. The panel regarding data protection has suggested amending the Right to Information Act to restrict non-disclosure of information to cases where harm to an individual is more than the importance of transparency and accountability in the functioning of public authorities.
viii. For data storage, the report identifies circumstances under which data has to be compulsorily stored in India and cases where it can be stored with mirroring provisions. The report stresses that critical data has to be stored in India.
About Srikrishna panel:
♦ Formed in – July 2017
♦ Formed by – Government of India
♦ Head – Justice B N Srikrishna
♦ Members – 10
♦ Purpose – to recommend a framework for securing personal data and address privacy concerns and develop safeguards against data breaches 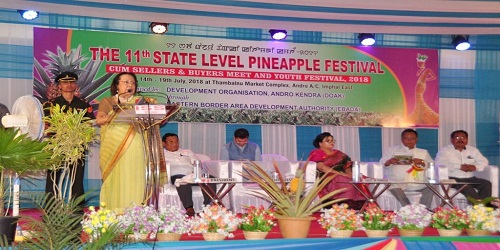 11th state-level pineapple festival cum Sellers & Buyers Meet and Youth Festival, 2018:
i. The festival was organized by Development Organisation, Andro Kendra (DOAK) through Eastern Border Area Development Authority. It was inaugurated by Manipur Governor Najma Heptulla.
ii. In this festival, sellers and buyers met to promote pineapple as a viable cash crop and help the farmers to attain a sustainable livelihood.
iii. The festival aimed to help the farmers to become economically stable and enhance their livelihood.
iv. 163 pineapple stalls and 32 food stalls were put up by indigenous tribes from Andro AC in the festival. The festival is celebrated since 2008.
v. Najma Heptulla also inaugurated a cold storage unit constructed under Department of Horticulture & Soil Conservation at Thambalnu Market Complex.
Some National Parks in Manipur:
♦ Sirohi National Park
♦ Keibul Lamjao National Park Riverine port on river Mahanadi in Kendrapara district:
i. The port will developed on a public-private-partnership mode on build, own, operate, share and transfer (BOOST) basis.
ii. The proposal was approved at a meeting of the High Level Clearance Authority (HLCA) that was held under the chairmanship of Odisha Chief Minister Naveen Patnaik.
iii. The project will developed in Akhadasali village under Mahakalpada block in Kendrapara district.
iv. According to the proposal, the port will be established in 2 phases. In the first phase, 2 berths will be developed for transportation of 18.43 million tons cargo per annum for which expenditure is estimated to be Rs 2,110 crore.
v. The requirement of land for the initial phase has been estimated as 175 hectare. This riverine port will be connected to National Highways-53 and Haridaspur-Paradip Railway Line for transportation of cargo.
vi. The capacity of transportation of cargo will raise from 18.43 million tons per annum to 45.88 million tons per annum. Also, an additional 125 hectare of land will be needed.
vii. After commission, the port will offer nearly 4,300 direct and indirect employment opportunities in the first phase, and around 10,700 in the second phase.
Some wildlife sanctuaries in Odisha:
♦ Baisipalli Wildlife Sanctuary
♦ Balimela Wildlife Sanctuary
♦ Balukhand-Konark Wildlife Sanctuary

Odisha to implement its own food security act from Oct 2, 2018
On July 29, 2018, Odisha Chief Minister Naveen Patnaik announced that the state government would implement its own food security act from October 2 .
i. It would cover nearly 34.44 lakhs people left out of National Food Security Act (NFSA).
ii. Earlier it had launched the Act with rice at Re 1 per kg for people living below poverty line in 2013.
iii. This was announced in ‘Ama Mukhyamantri, Ama Katha’ (Our Chief Minister, Our Issues) program.
Background:
The NFSA is being implemented in Odisha since November 2015 and it covers over 3.26 crore people.
Odisha:
♦ Lakes : Chilika Lake, Kanjia Lake, Anshupa Lake, Balimela Reservoir.
♦ Dams: Rengali Dam, Kala dam, Pitamahal Dam, Kansbahal Dam, Tikhali Dam, Deras Dam, Salia Dam, Ghodahada Dam, Kuanria Dam. 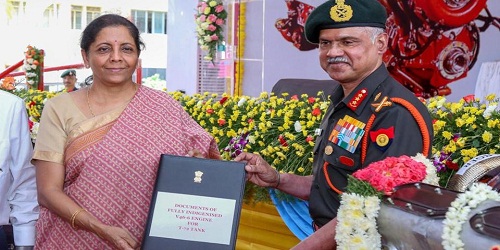 i. The engines were manufactured by the Engine Factory, Avadi, a unit of Ordnance Factory Board, Department of Defence Production. It was made with 100% local parts.
ii. The efforts under Make in India by the Engine Factory would save Rs 80 crore of the exchequer every year.
iii. The first engine is of 1000 HP named V92S2 engine and it powers T-90 Bhisma Tank.
iv. The second engine is V-46-6 engine and it powers the T-72 Ajeya Tank and its variants.
v. These were based on the Russian design of critical assemblies like turbocharger, supercharger, fuel injection pumps.
About The Engine Factory:
Established: 1987.
Chief of Army Staff: Gn. Bipin Rawat.

Oil and Natural Gas Corporation (ONGC) has been bestowed with INFRA Icon Award in the ‘Global Energy’ category
On 27th July 2018, Oil and Natural Gas Corporation (ONGC) was awarded the INFRA Icon Award in the ‘Global Energy’ category at the mid-day INFRA Icons Awards 2018, in Mumbai.
ONGC – INFRA Icon Award in the ‘Global Energy’ category:
i. The award was given away by Additional Metropolitan Commissioner, Mumbai Metropolitan Region Development Authority (MMRDA), Pravin Darare.
ii. The award was received by Executive Director-Head Regional Office, ONGC Mumbai, S. Gopinath.
iii. ONGC has received this award as a recognition of its valuable contribution in upgrading India as a whole.
iv. The ‘INFRA Icons’, is an initiative by mid-day. It aims to bring a change with trendsetters related to the infrastructure of India.
v. This award honours the remarkable performance in the corporate world and in various sectors.
vi. The theme of the event was: ‘Smart cities envisages to take infrastructure development to a next level’.
vii. ONGC is the world’s second largest exploration and production (E&P) company.
About Oil and Natural Gas Corporation (ONGC):
♦ Chairman & Managing Director – Shashi Shanker
♦ Registered Office – New Delhi 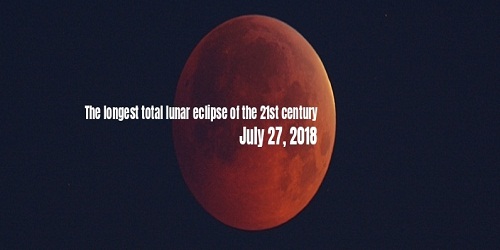 i. It would last for 1 hour and 42 minutes and 57 seconds.
ii. It is considered as the 21st century’s longest lunar eclipse.
iii. The longest total lunar eclipse of the last century happened on 16 July 2000, lasting nearly four minutes longer, at 1 hour and 46.4 minutes.
iv. The next such phenomenon can be witnessed on June 9, 2123 according to a National Geographic report. i. Earlier world record of 58.10 set by Canadian Kylie Masse at the World Championships in Budapest on July 25 of last year.
ii. The top three finishers all broke 59 seconds, with Olivia Smoliga second in 58.75 and Smith third in 58.83. Objective:
It is done to raise awareness for tiger conservation.
Key Points:
It was created in 2010 at the Saint Petersburg Tiger Summit where leaders of 13 tiger range countries resolved to double its number in the wild by 2022. The slogan was ‘T X 2’.
India’s role:
i. India conducts a census to assess tiger population every four years. The cycles of the estimation have already been completed in 2006, 2010 and 2014.
ii. In 2006, there were 1,411 tigers, which increased to 1,706 in 2010 and 2,226 in 2014.
iii. Only 3,890 tigers are left in the world, out of which 2,226 are in India.
Commemmoration of Global Tigers Day 2018:
i. To commemorate this day, walls of Amravati railway station are being covered with wildlife paintings, to create awareness about the importance of protection of tigers.
ii. A new initiative to make people earn livelihood has been started by Melghat Tiger Reserve in 8 villages near Dhyanaganga Sanctuary in Buldana district.
iii. According to the tiger census, carried out in 2017, Melghat has 41 adult tigers and 18 cubs.
iv. It is under The Project Tiger which now says that India has more than 50 reserves.
Background:
Bangladesh, Vietnam, Cambodia, India, Bhutan, Thailand, Indonesia, Laos, China, Malaysia, Russia, Nepal and Myanmar are among the few countries that have wild tigers.
About Project Tiger:
It was launched in 1st April 1973.