We are here for you to provide the important current affairs July 28 2018 which have unique updates of all daily events from all newspapers such as The Hindu, The Economic Times, PIB, Times of India, India Today, Indian Express, Business Standard, all Government official websites. Our complete current affairs helps you to get more marks in Banking, insurance, UPSC, SSC, CLAT, Railway and all other competitive Exams. 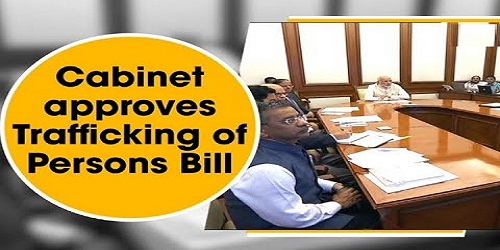 i. An initial corpus of 10 crore rupees will be created for the first time.
What the bill says:
ii. Under this bill, a National Anti-Trafficking Bureau would be established to investigate trafficking cases.
iii. It would have coordination between law enforcement agencies and NGOs and would monitor the trafficking routes
iv. 10 years to lifetime imprisonment for buying and selling of humans for forced labour, child bearing and if the victim acquires life threatening diseases like AIDS.
v. It would provide setting up of Anti-Trafficking Units (ATUs) at the district level.
vi. The Bill provides for establishment of these committees (ATCs) at all three levels viz. national, state, and district levels which will help victims to rehabilitate.
Benefits:
i. It will prevention, rescue, and rehabilitation of trafficked persons.
ii. It is a victim centric bill.
Other announcements:
Government is expected to bring a separate amendment in the NIA act to establish National Investigation Agency as the nodal authority for probing the cases of human trafficking.

A museum for all former Prime Ministers to be built in Nehru Memorial Museum and Library
On July 28, 2018, Nehru Memorial Museum and Library announced that a museum for all former prime ministers of the country will be built in the 25 acre estate of Teen Murti Bhavan complex in New Delhi.
i. Rs 270 crore has been sanctioned by the government for the construction of the museum of all 4 PMs.
ii. This decision was taken in the 43rd annual general meeting of NMML chaired by Home Minister Rajnath Singh. 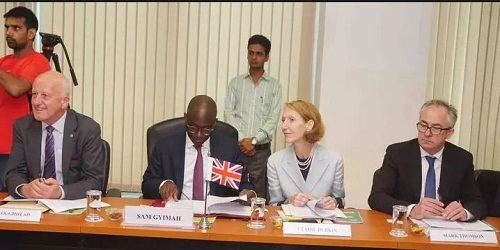 Objective:
To discuss about the bilateral S&T cooperation between the two countries.
Key Points:
i. After Newton Bhabha partnership , new partnerships may happen in areas of: Cyber Physical System- Artificial Intelligence, digital Economy, health technologies, cyber security and promoting clean growth, smart urbanization, future mobility and environment.
ii. Dicsussion on UK proposal for FutureTech Festival scheduled at New Delhi in 2018.
iii. Indian side was represented by Dr. Harsh Vardhan, Minister of Science & Technology, Earth Sciences & Environment, Forests and Climate Change, India.
iv. UK’s side had Mr. Sam Gyimah, Minister for Universities, Science, Research and Innovation, UK  as the representative.
Other facts:
i. Last SIC meeting was held in London on June 15, 2016.
ii. based on that few achievements took place including:

Mahila Shakti Kendra Scheme 2017-2020 launched to empower rural women through community participation in 115 aspirational districts
On July 28, 2018, Government of India has approved a new scheme to empower rural women through community participation. It is called ‘Mahila Shakti Kendra’ for 2017-18 upto 2019-20.
i. The cost sharing ratio of the scheme is 60:40 between centre and states except North Eastern states.
ii. North East and Special Category Stateshave the ratio of 90:10.
iii. It will work on the following levels:

iv. It will be done through College Student Volunteers in 115 aspirational districts as part of the Block Level initiatives.
v. District Level Centre for Women (DLCW) has also been provided to for 640 districts to be covered in phased manner.
Benefit:
i. It will act as a link between village, block and state level in facilitating women centric schemes.
ii. It will also facilitate Beti Bachao Beti Padhao (BBBP) scheme at the district level.
Ministry of Women and Child Development:
Union Minister: Maneka Gandhi.

i. The objective is to bring transperancy and ethics in the work culture and among all railway employees.
ii. It would train every employee to understand the need and value of ethics in Personal and Public life.
iii. It would help to deal with ethical dilemmas in life and Public Governance.
iv .It would help understand the policies of Indian Railways on ethics and integrity.
v. It would develop inner governance through tapping inner resources.

PRANAM Act : Country’s first of a kind act launched by Assam Government
On July 28, 2018, Assam Finance Minister Himanta Biswa Sarma announced a first-of-its-kind legislation- the Assam Employees PRANAM Act would be implemented in the state from October 02, the day of Gandhi Jayanti celebration in 2018.
Objective:
To not let the employess neglect their loved ones.
i. The Act will deduct 10% of an employee’s pay and transfer it to the account of the relatives concerned. Another 5% would be deductible if the employee has a differently abled sibling.
ii. Thus it will compel Assam government employees to take care of their respective parents.
iii. It also has provisions to help siblings with physical or mental disabilities.
iv. Although before enforcing the Act, a three members commission would be constituted which will be headed by a retired employee with rank of additional chief secretary.
Assam:
♦ Capital: Dispur.
♦ Chief Minister: Sarbananda Sonowal.
♦ Governor: Jagdish Mukhi.
♦ National Parks: Kaziranga National Park, Manas National Park, Nameri National Park, Dibru- Saikhowa National Park, Orang National Park.

Urban Sanitation and Cleanliness Policy:
i. The policy was launched by Gujarat Chief Minister Vijay Rupani. The policy focuses on streamlining the collection and disposal of all types of waste in cities and towns.
ii. One of the mains objectives of the policy is complete abolition of manual scavenging.
iii. Vijay Rupani said that, a system to convert solid waste into fuel to generate green energy will be established.
iv. The policy also stresses on recycling of drainage water. This policy is line with the National Urban Sanitation Policy.

PM Narendra Modi Africa Tour 2018: 5-Day State Visit To Uganda, Rwanda, South Africa; To Attend BRICS Summit In SA
i. On July 23, 2018 PM Modi set out for his three-nation Africa tour of Rwanda, Uganda and South Africa, as part of India’s outreach to the resource-rich continent.
ii. With an aim to boost economic ties, PM Modi attended the India-Rwanda Business forum in Kigali on July 24,2018.
iii. He became the first Indian Prime Minister to visit Rwanda.
iv. Two LOC (Line of Credit) agreements worth 100 million each was signed. Out of this: USD 100 million for development of Industrial Parks and expansion of Kigali Special Economic Zones  and another USD 100 million for Agriculture irrigation scheme in Rwanda.
v. On July 25, 2018, Delegation-level talks were held between Prime Minister Narendra Modi and Ugandan President Yoweri Museveni in Kampala in the Indian-Uganda Business Forum.
vi. On the last leg of his 5 day South African tour, is the 10th BRICS Summit 2018 held in Johannesburg on July 26-27, 2018.
vii. BRICS was held under the theme is “BRICS in Africa: Collaboration for Inclusive Growth and Shared Prosperity in the 4th Industrial Revolution”……………………………….Click here to Read more 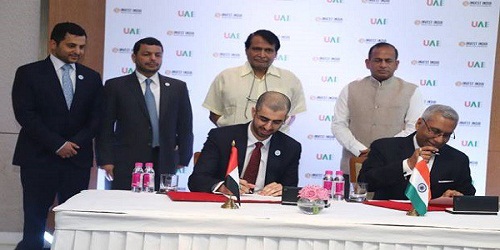 India – UAE Artificial Intelligence Bridge:
i. This partnership will produce an estimated USD 20 billion in economic benefits in the next ten years for India and UAE.
ii. This MoU will enhance development in Blockchain, AI (Artificial Intelligence) and Analytics. By 2035 AI can potentially add USD 957 billion to the Indian economy.
iii. The MoU was signed at the India leg of GovHack series of World Government Summit. Indian Minister of Commerce & Industry and Civil Aviation, Suresh Prabhu and H.E. Ahmad Sultan Al Falahi, Minister Plenipotentiary – Commercial Attache, were present
iv. The UAE-India collaboration will convene a UAE-India AI Working Group (TWG) between the UAE Ministry for Artificial Intelligence, Invest India and Startup India.
v. The TWG meeting will be held once in a year with an aim to increase investment in AI startups and research activities in partnership with the private sector.
Some facts about India – UAE ties:
♦ UAE is India’s third largest trading partner
♦ Indians constitute the largest expat community in the UAE at 27%
♦ UAE has invested more than USD 5.3 billion in India
♦ UAE has committed USD 75 billion for infrastructure development in India

Google Unveils ‘Edge TPU’ and ‘Cloud IoT Edge’ at the Google Cloud Next ’18 conference in San Francisco
On 25th July 2018, Google launched two new products ‘Edge TPU’ and ‘Cloud IoT Edge’ with an aim to help customers develop and deploy intelligent connected devices, at the Google Cloud Next ’18 conference in San Francisco, United States.
‘Edge TPU’ and ‘Cloud IoT Edge’:
i. ‘Edge TPU’: is a new hardware chip. It is very small such that four of them can fit on a U.S penny.
ii. Edge TPU: is Google’s purpose-built application-specific integrated circuit (ASIC) designed to run AI (Artificial Intelligence) at the edge.
iii. It delivers high performance in a small physical and power footprint. It enables the deployment of high-accuracy AI at the edge.
iv. ‘Cloud IoT Edge’: is a software stack that extends Google Cloud’s powerful AI capability to gateways and connected devices.
v. Google also announced a new Cloud Search functionality to help companies index their third-party data beyond G Suite, whether that data is stored in the cloud, or on-premise.
vi. Google also announced a product named ‘Titan Security Key’. This will protect customers from phishing attacks.
About Google:
♦ CEO –Sundar Pichai
♦ Headquarters – California, United States 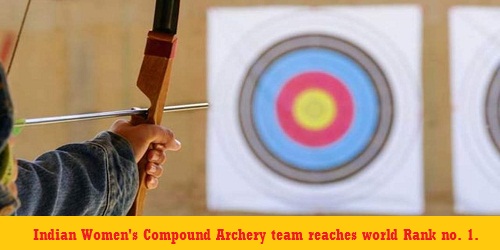