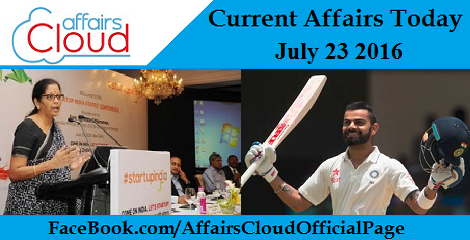 Conference is being held in New Delhi on July 22, 2016.
ii. This conference will serve as a platform for all states to discuss the progress, policies and good practices which they have followed on the Startup India initiative in their states.
iii. Start-ups, investors, incubators and various Central ministries and departments will be a part of this conference and Telangana, Gujarat, Rajasthan, Kerala and Karnataka, would be presenting the initiatives taken by them to promote start-ups.
iv. It is noted that Department of Industrial Policy and Promotion (DIPP) is organizing a day-long conference on 23rd July, 2016 and this conference will be presided over by Smt. Nirmala Sitharaman, Hon’ble Minister of State for Commerce & Industry.
What is Start Up Initiative?
♦ Start Up India was unveiled by Shri. Narendra Modi aims at fostering entrepreneurship and promoting innovation by creating an ecosystem that is conducive for growth of Startups. Government also launched the “Startup India” movement on January 16, 2016 in New Delhi.
♦ The Action Plan for Startup India was also unveiled by the Mr. Narendra Modi. This Action Plan lays down the roadmap for creation of a conducive ecosystem for the growth of Startups in India.

Tamil Poet Thiruvalluvar’s Statue finally finds a place in Uttarakhand
i. Uttarakhand Chief Minister Harish Rawat decided to install the statue of Tamil saint-poet Thiruvalluvar in the lawns of Haridwar’s Mela Bhawan on the bank of the Ganga.
ii. The lawn where the statue is being installed is bigger and adjacent to the one where it was kept temporarily.
iii. Harish Rawat also wrote a reassuring letter to Tamil Nadu CM J Jayalalitha about installing the statue of Thiruvalluvar is his state’s proud privilege and it will be done with all the fanfare and dignity.
iv. It is noted that In an initiative to introduce Northern India to the great literary legacy of the Tamil savant, former BJP MP (Rajya Sabha) Tarun Vijay had decided to bring his 12-foot statue to Haridwar and install it in the city.
v. This is a followed issue when a newspaper depicts the picture of the statue wrapped in black plastic sheet and lying in a state of neglect on the Mela Bhawan premises had triggered considerable outrage in Tamil Nadu.

Afhanisthan Traders laid a platform to tie up with Indian Traders in MADE IN AFGHANISTHAN Conference
i. As a platform to promote Afghan products and to boost trade relations between both nations, a conference named ‘Made in Afghanistan’ was held in New Delhi.
ii. ‘Made in Afghanistan: Harnessing the Economic Potential‘ was the theme of this neighboring conference.
iii. This Conference has been designated to enable for the Afghani entrepreneurs to connect with the Indian Business men mainly in the Agricultural Sector.
iv. During the event, An MoU was also signed between FICCI-FLO and Afghanistan women business federation for business promotion.
v. The Afghan traders were in a high degree of hope to establish a well Leiden trade relationship with India and also they exhibited their own products in this two day conference.
About Afghanisthan
♦ Capital – Kabul,
♦ Currency – Afghan afghani
♦ President – Ashraf Ghani.

Around the World in 11 days – Russian adventurer Fedor Konyukhov seals New World Record
i. Russian adventurer Fedor Konyukhov has broken the record for the fastest circumnavigation of the Earth in a hot air balloon in just over 11 days, landing safely in West Australia’s Wheat belt.
ii. He made the 34,000km journey in just 11 days and beaten the late Steve Fossett’s record of circumnavigating the world by two days.
iii. After his successful journey, he landed near the small town of Bonnie Rock. He started his joinery from Western Australia’s Avon Valley on July 12.
iv. It is also noted that this Russian orthodox priest has already climbed Mount Everest twice and travelled to the North and South poles. He’s also an artist and has written 17 books.
v. He also has planned his next adventure in 2017: crossing Australia from west to east riding a camel.

IRCTC and SBI join hands to promote UTS and E-Ticketing System to ease the Service for Passengers
i. Indian Railway Catering and Tourism Corporation (IRCTC) and one of the World’s Leading commercial Banks StateBank of India (SBI), have signed a Memorandum of Understanding (MoU) on July 20.
ii. This pact is signed in order to thrash out a detailed plan for promotion of rail ticketing activities which includes internet ticketing and unreserved ticketing system.
iii. This MoU is also framed to for the joint exploration in the areas of cooperation and draw up a detailed plan for promotion of the rail ticketing activities.
iv. Unreserved Ticketing System and Internet Based e-ticketing System are the core areas to be concerned by the desirous combined work of both signatories.
About IRCTC:
♦ Name – Indian Railway Catering and Tourism Corporation
♦ Establishment – 1999
♦ CEO – A.K. Manocha
♦ HQ – New Delhi

Federal Bank partners with Reliance Jio Money
i. Kochi based Federal Bank have announced partnership with Reliance Jio Money for One-Click payment service that will make payment ease for their customers.
ii. The Reliance Jio money is a payment wallet where Federal bank will enable a direct payment option for its customers in mobile devices.
iii. Through this service customers can complete a transaction without funding the wallet also without pre-loading their wallet.
Federal Bank
♦ Headquarters: Kochi
♦ CEO: Shyam Srinivasan
♦ Slogan: Your Perfect Banking Partner i. India’s largest Private Sector lender ICICI bank has conducted a coin exchange mela during Rath Yatra festival at the RBI financial literacy camp in Puri.
ii. The mela was organised upon the suggestion from RBI’s S. P. Mohanty, General Manager, Issue Department of RBI. It was inaugurated by the SP.Mohanty.
iii. The melas intended to offer free facility of exchanging acceptable soiled and mutilated currency notes with fresh currency and coins that had piled of over 52000 people, where they exchanged coins worth Rs. 6.34 lakh.

Karnataka Bank’s solar initiative for rural students
i. Mangalore based Karnataka Bank has started a programme to offer solar lights in the non-electrified houses of students in rural zones.
ii. This is joint iniative of lender with the Manipal-based non-governmental organisation Bharatiya Vikas Trust (BVT) under its corporate social responsibility (CSR) route.
iii. To illuminate two lights in a house total cost of a unit is Rs. 9,500. While the house holder pays Rs. 4,500, the bank bears the remaining cost.

Mydala partners Viacom 18 for ‘Star Trek Beyond’
i. Local services marketing portal Mydala.com in partnership with Viacom 18 to release the Star Trek Beyond, which is the third part of the iconic Star Trek Reboot Series.
ii. The movie is the 6th movie that mydala platform has promoted for Viacom 18 this year – the other’s include Drishyam, Mission Impossible 5.
iii. Upon this joint move Mydala is set to contest where users can win movie tickets as well as official merchandise.

Ganesh Singh appointed head of JPC, on land acquistion bill
i. BJP MP Ganesh Singh was appointed the new Chairperson of the Joint Committee of Parliament examining the Land Acquisition Bill. Singh represents the Satna constituency of Madhya Pradesh.
ii. Earlier S Ahluwalia who was holding the post is who became Minister of the State for Parliamentary Affairs in reshuffle of the council of ministers. The move has been made as Minister cannot hold any Parliamentary committee.
iii. The Bill creates five special categories of land use PPPs where government owns the land.
♦ Defence
♦ Affordable Housing
♦ Rural Infrastructure
♦ Industrial Corridors
♦ Infrastructure Including 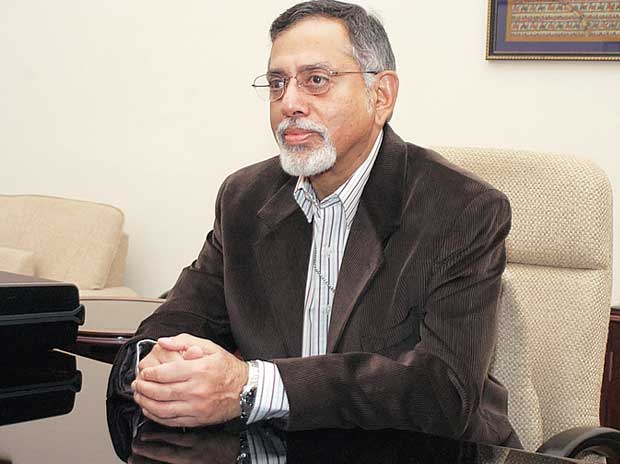 time) of the Axis Bank control board.
ii. India’s third largest private lender appointed Mishra as an independent director and Non-Executive Chairman for a period of five years.
iii. He was the Finance Secretary of the Central Government at the time of superannuation in 2008 and also served as member of Non Commission as the Non-Executive Chairman of the Bank.
iv. Dr. Mishra is hailing from Delhi and he served in Indian Administrative Service for about 35 years.
v. He also served as a member of the 13th Finance Commission and a member of the Advisory Council of the ADB – Asian Development Bank Institute, Tokyo.
About AXIS bank:
♦ CEO – Shikha Sharma
♦ HQ- Mumbai
♦ Establishment – 1990.

Fastest Woman – Kendra Harrison sets a World Record of 12.2s in London League
i. Kendra Harrison of America set a 100m hurdles world record of 12.20 seconds at the London Diamond League meeting on July 22 in London.
ii. This was one hundredth of a second faster than the previous world record of 12.21 had stood since 1988 and was held by Yordanka Donkova of Bulgaria.
iii. Kendra Harrison has run six of the seven fastest times this year, and two of the four fastest ever.
iv. Already in May, she defeated Donkova’s world mark with a time of 12.24 at the Prefontaine Classic, thereby running as the fastest woman in the world this year.
v. Brianna Rollins (12.57), Kristi Castlin (12.59) clocked second and third positions in the event respectively.

i. India test Skipper Virat Kohli has become the first Indian captain to score a double century outside India.Beside he is the fifth Indian Skipper to score a double century in a Test match.
ii. The Delhi batsman Kohli scored 200 runs against West Indies in the first Test at the Sir Vivian Richards stadium in North Sound in West Indies.
iii. The feat also marks first double ton outside the sub-continent since Wasim Jaffer’s 212 for India in St. John’s in 2006.

Sachin Tendulkar to launch new game Sachin SaGa
i. Indian Batting great Sachin Tendulkar is set to appear in the world of digital gaming with the proposed launch of his official game named Sachin Saga.
ii. On Sachin Saga a gamer can experience his cricketing journey and get to play as Sachin in his favorite 100 matches.
iii. On this platform gamers will experience as Sachin also to choose their team and play against their friends to win the World Cup.
iv. Sachin Saga being developed by PlayIzzOn Technologies at its studios. PlayIzzOn firm is a gaming arm of JetSynthesys. 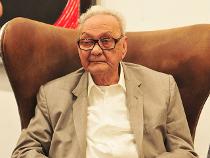 S.H.Raza passed away on July 23 in New Delhi following a prolonged Illness.
ii. He is a Padma Vibushan Awardee and he is well known for his ‘bindu’, ‘purush-prakriti’ and ‘nari’ in his instantly recognisable geometric abstract works.
iii. His works are mainly abstracts in oil or acrylic, with a very rich use of color, replete with icons from Indian cosmology as well as its philosophy.
Syed Haider Raza
♦ Syed Haider Raza was born in Babaria,Mandla district,Madhya Pradesh in 1922.
♦ He was awarded the Padma Shriand Fellowship of the Lalit Kala Academy in 1981, Padma Bhushan in 2007 and Padma Vibhushan in 2013.
♦ He was conferred with the highest French civilian honor, theCommandeur de la Legion d’honneur(Legion of Honor) on July 14, 2015.