We are here for you to provide the important current affairs July 1 2018 which have unique updates of all daily events from all newspapers such as The Hindu, The Economic Times, PIB, Times of India, India Today, Indian Express, Business Standard, all Government official websites. Our complete current affairs helps you to get more marks in Banking, insurance, UPSC, SSC, CLAT, Railway and all other competitive Exams. 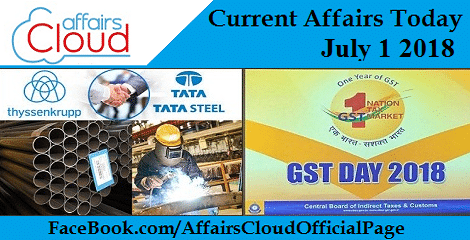 MoS for Agriculture Gajendra Singh Shekhawat announced linkage of 22,000 rural markets to e-NAM portal by 2020 in AgriVikas 2018 event in Bhubaneswar, Odisha
On June 29,2018, Union Minister of State for Agriculture Gajendra Singh Shekhawat announced  that 22,000 rural markets would be linked to the Electronic National Agriculture Market (e-NAM) by 2020 as part of its drive to double the income of farmers.
This was announced the “AgriVikas 2018”, a conclave on agriculture and allied sectors in Bhubaneswar, Odisha.
Key Points:
i. 22,000 rural haats will be upgraded to Gramin Agricultural Markets and linked with the e-National Agriculture Market to enable farmers sale directly to potential buyers.
ii. 585 e-mandis were already connected to the e-NAM under agricultural market reforms.
iii. This would helpin direct contact with the buyers for the farmers and is also committed to realizing centre’s scheme of doubling farmers income by 2022.
Other announcements in the AgriVikas event:
i. Odisha’s agrarian economy is lagging behind despite immense potential due to lack of skill development.
ii. Government would set up a model for a kewda cluster along the 480 KM coastline of Odisha. It is an extract from the male flowers of screw-pine tree, which is used for flavouring food.
iii. It was also announced that turmeric from Odisha’s Kandhamal district can be exported abroad and it will benefit the farmers.
About AgriVikas 2018:
i. AgriVikas 2018 is being supported by the ministries of agriculture, food processing, petroleum and natural gas, skill development and entrepreneurship, commerce and industry, and micro small and medium enterprises (MSME).
ii. Over 1,000 participants including farmers, horticulturists, agriculture scientists, entrepreneurs and students from various states are participating in the two-day event.
About e-NAM Portal:
The e-NAM is a pan-India electronic trading portal, a network of the existing Agricultural Produce Market Committee (APMC) mandis to create a unified national market for agricultural commodities. The portal provides a single window service for all APMC related information and services. Odisha, RIMES sign MoU for effective disaster management:
i. The Odisha State Disaster Management Authority (OSDMA) signed an MoU with RIMES for improving early warning system for effective management of all types of disasters in Odisha.
ii. This agreement will lead to development and pilot implementation of decision support systems for automating risk assessment, advisory generation and dissemination.
iii. This will enable OSDMA to assess and manage risks from flood, tsunami, drought, heat wave, lightning and road accidents.
iv. These tools will be built with open-source software platforms and public domain data sets, with complete involvement of OSDMA and its line departments and collaborating agencies.
v. Initially, the agreement will remain in act for 5 years with a cost involvement of nearly Rs 8 crore.
vi. RIMES and OSDMA collaboration will contribute to global efforts for increasing the availability and access to multi-hazard early warning systems as per the Sendai Framework for Disaster Risk Reduction 2015-2030.
vii.The agriculture department also signed 3 more MoUs for welfare of farmers and to improve their production.
viii. An MoU on Doubling Farmers’ Income in Odisha Intervention will help 2 lakh small and marginal farmers in the next 3 years in 9 districts of Odisha.
ix. An MoU on the promotion of ecologically sound agricultural practices and water management was signed to restore common land and water bodies through village institutions and federations in all the districts of Odisha.
x. An MoU was signed to promote competition among farmers and agricultural workers to develop innovations in agriculture and to reduce the workload of farmers, especially the workload of women in farming.
About Regional Integrated Multi-Hazard Early Warning System (RIMES):
♦ Based in – Thailand
♦ Type – UN registered international and inter-governmental institution
♦ Owned & Managed by – 48 members and collaborating states
♦ Purpose – building capacities in the generation and application of user-relevant early warning information

Central Reserve Police Force launches 24 hour ‘Madadgaar helpline’ in Jammu & Kashmir
On June 29,2018, The Central Reserve Police Force launched ‘Madadgaar Helpline’, a distress helpline for the people of Jammu and Kashmir.
Objective:
It aims to provide immediate assistance to the people amidst the war-torn region
Key points:
i. The helpline number is : 14411.
ii. It is a 24 hour helpline giving assistance ranging from medical help to financial help.
iii. This is the first one of a kind helpline and mainly focuses to serve and protect children and women of the region from any harassment or assault being faced by them.
iv. This is also available to pilgrims and tourists visiting Jammu and Kashmir and students residing in the region.
National Parks in Jammu and Kashmir:
Dachigam National Park, Hemis National Park, Kishtwar National Park, Salim Ali National Park.

Jodhpur Institute of Hospitality Management inaugurated by Tourism Minister Shri K.J. Alphons
On June 30,2018, The Minister of State (I/C) for Tourism Shri. K.J. Alphons inaugurated the Institute of Hospitality Management in Jodhpur .
i. India is among the fastest growing Tourism economy in the world.
ii. In 2017, the Indian tourism receipts went up by 20.8% against a global growth rate of 7%.
iii. It is expected that in three years India will be able to double the revenue from foreign tourists. Mumbai Airport Among Least Punctual Airports In The World: Study by OAG
Chhatrapati Shivaji International Airport in Mumbai, the second busiest in India, has been ranked as the fifth least punctual airport in the world, as per a study conducted by OAG, a global leader in providing flight information. Mumbai Airport Among Least Punctual Airports In The World:
i. Indira Gandhi International airport in Delhi, the 16th busiest airport in the world, has secured 451st position among the 513 airports worldwide, in flight punctuality.
ii. No major Indian airport appeared in the top 200 in ‘on-time performance’ (OTP). But, Port Blair airport in the Andaman and Nicobar Islands got the worldwide rank of 65, with punctuality rate of 84.6 %.
iii. OTP for Delhi was 70.7 %. Nagoya Komaki Airport in Japan has topped the global ranking list with OTP rate of 94.5 %.OTP for Mumbai was 60 %.
iv. Hyderabad airport was ranked 246, Bengaluru airport – 262 and Kolkata – 270.
v. The OAG study’s reference period was around 1 year between June 2017 to May 2018. It focused on delays arising out of arrivals.
vi. It covered the OTP of airlines also. Air India secured 131st spot with a punctuality rate of 58.4 % among the 137 airlines worldwide.
viii. Port Blair airport with OTP of 84.6 % was given a 4 star rating. Delhi airport got a 2 star rating. Mumbai airport got a 1 star rating.
ix. Other OTPs:

x. Pakistan International Airlines got the 126th rank with OTP of 59.7 %. IndiGo was named the best on-time performer among Indian carriers with 33rd place and OTP of 82 %.
xi. South Korea’s T’way Air topped the global ranking with an OTP of 95.6 %.
Tag lines of some banks:
♦ Indian Bank – Your Tech-friendly bank
♦ Indian Overseas Bank – Good people to grow with
♦ IDBI Bank – Banking For All, Bank Aisa Dost Jaisa

BSE & BME tie-up to develop commodity derivatives markets
On June 30,2018, Premier stock exchange BSE has entered into an agreement with the Bombay Metal Exchange (BME) for the growth and systematic development of commodity derivatives markets.
Objective:
They will work jointly on initiatives to deepen the understanding of commodity market among stakeholders.
Key Points:
i. With its domain knowledge and unique stakeholders ranging from importers, traders to corporates, the BME will assist the BSE in designing new and innovative deliverable products in commodities like aluminium, copper, zinc, nickel and lead among others.
ii. The BSE can take advantage of the expertise of the stock exchange’s educational programmes to enter the commodities markets .
iii. The agreement will also help in launching new and innovative products, adding more value to the existing commodities value chain and ecosystem with the objective of developing and strengthening commodity derivatives market.
Bombay Stock Exchange (BSE):
i. It is Asia’s first stock exchange.
ii.  Founded : 9 July 1875.
iii. The BSE is the world’s 10th largest stock exchange with an overall market capitalization of more than $2.3 trillion on as of April 2018.
Bombay Metal Exchange (BME):
♦ BOMBAY METAL EXCHANGE LTD., an Apex Body of Non-ferrous Metals Trade & Industry has been functioning incessantly for the promotion of the nonferrous metals trade for the last 5 decades.
♦ President: Rikab V.Mehta. 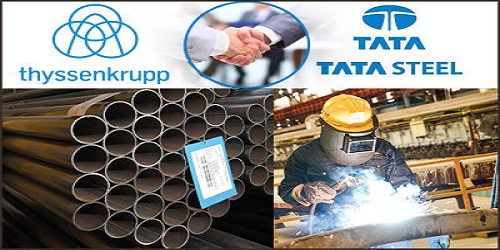 i. The new steel company will have a total workforce of 48,000 employees spread across 34 sites, producing about 21 million tonnes of steel a year with revenues of around Euro 15 billion.
ii. The joint venture will create a strong pan-European steel company that is structurally robust and competitive.
iii. In case of an initial public offering (IPO) of the JV, Thyssenkrupp will receive a higher share of the proceeds, reflecting an economic ratio of 55/45. Thyssenkrupp said it also has the right to exclusively decide on the timing for a potential IPO.
iv. The JV will be managed as one integrated business through a holding company headquartered in the Amsterdam region of the Netherlands. Thyssenkrupp & Tata Steel will have a two-tier governance structure that comprises a supervisory board and a management board each with six members, on which Thyssenkrupp and Tata Steel will have equal representation.
v. The economic viability of the new company and the expected annual recurring synergies (savings) of approximately EUROS 400 to EUROS 500 million.
TATA Steel:
♦ Chairman: Natarajan Chandrasekaran.
♦ Headquarters: Mumbai.
Thyssenkrupp:
♦ Headquarters: Essen, Germany
♦ CEO: Heinrich Hiesinger. 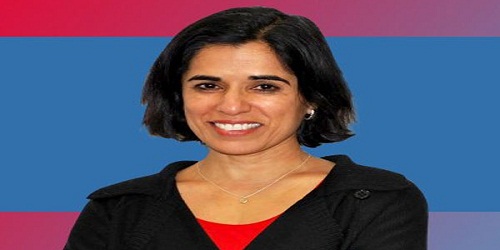 1st July 2018 celebrated as ‘GST day’, to commemorate the first year of the unprecedented reform of Indian taxation
On 1st July 2018, Indian Government celebrated the 1st Anniversary of the Goods and Services Tax (GST) as GST day. GST day – July 1:
i. GST was launched on the 1st July 2017 at a grand ceremony in the Central Hall of Parliament.
ii. Union Minister for Railways, Coal, Finance & Corporate Affairs Piyush Goyal presided over as the Chief Guest of the event. Minister of State for Finance, Shiv Pratap Shukla was the Guest of Honour.
iii. The Constitution (122nd Amendment) Bill, 2014 was introduced in the Parliament on 19th December 2014. It was enacted as Constitution (101st Amendment) Act, 2016.
iv. The Goods and Services Tax (GST) Council was notified with effect from 12th September 2016.
v. The GST Council consists of the Union Finance Minister as Chairman, the Minister of State (Revenue) and the State Finance/Taxation Ministers as members.
vi. The council makes recommendations to the Union and the States on all GST related issues. The Council has met 27 times so far.
vii. Four Laws called CGST Act, UTGST Act, IGST Act and GST (Compensation to States) Act were passed by the Parliament and were notified on 12th April 2017.
viii. All the other States (except Jammu & Kashmir) and Union territories with legislature have passed their respective SGST Acts.
ix. On 8th July 2017, Jammu and Kashmir also passed the SGST Act and the Central Government also extended the CGST Act to Jammu and Kashmir.
x. Under this model, tax is levied concurrently by the Centre and States on a common base – supply of goods or services or both.
xi. GST levied by the Centre is called Central GST (Central tax / CGST). GST levied by the States is called State GST (State Tax / SGST).
xii. State GST (State Tax / SGST) is called UTGST (Union territory tax) in Union Territories without legislature.
xiii. CGST & SGST / UTGST is levied on all taxable intra-State supplies. Inter-State supply of goods or services is subjected to Integrated GST (Integrated tax / IGST).
xiv. IGST enables the Centre to levy IGST (Integrated Goods and Service Tax) that is CGST plus SGST, on all inter-State supply of goods or services or both.
About About Central Board of Indirect taxes and Customs (CBIC):
♦ Chairman – S. Ramesh
♦ Headquarters – New Delhi