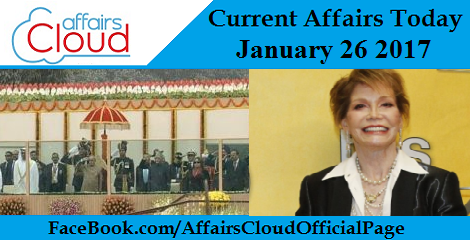 Madhya Pradesh Announces Total Ban on Polythene Bags from May 1, 2017 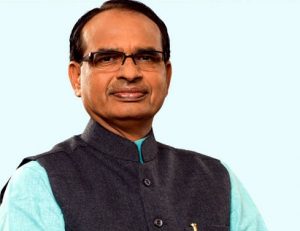 i. During the Republic Day address on January 26, 2017 in the state, Chief Minister of Madhya Pradesh, Shivraj Singh Chouhan announced a complete ban on polythene carry bags from May 1, 2017 in Madhya Pradesh.
ii. The decision aims to conserve environment, promote cleanliness and protect cows that generally dies of eating plastic bags.
iii. For the proper implementation of the ban, the CM has given three months time to the polythene manufacturers.

WCD Ministry releases National Action Plan for Children, 2016
The National Girl Child Day celebration on January 24, 2017 in New Delhi was marked by the release of National Action Plan for Children, 2016 (NPAC).
♦ NPAC has been developed by the Ministry of Women & Child Development.
Features of NPAC 2016
i. The Plan focuses on four key areas including survival; health & nutrition; education & development; protection & participation.
ii. Each priority areas has a set of clearly defined objectives, sub-objectives, strategies, action points and indicators for measuring the progress by the identified stakeholders.
iii. The plan has highlighted the new and emerging concerns for children such as online child abuse, children affected by  natural and man-made disasters and climate change.
iv. Strategies and action plans are based on the existing programmes and schemes of various Ministries/Departments. Besides, new schemes would be set up as per requirement.
v. The plan is formulated based on Sustainable Development Goals (SDGs).

Head Post Offices to Offer Services of Passport Seva Kendras
i. The Union Minister for Chemicals and Fertilizers Ananth Kumar inaugurated India’s first Post Office Passport Seva Kendras (POPSK) at Metagalli post office in Mysuru on January 25, 2017. The second POPSK simultaneously opened in Gujarat.
ii. The POPSK has been launched to expand the passport services over a wide area and simplify the process to travel abroad.
iii. The Ministry of External Affairs and the Department of Posts (DOP) made Joint Venture to implement the project of delivering passport-related services. Initially the pilot project has been inaugurated at the Mysuru Head Post office in Karnataka and at Dahod in Gujarat.
iv. Once the pilot project starts operating successfully, the POPSK would be opened in rest of the states in phased manner. In phase 1, 38 districts would be covered. India Post has around 800 head post offices.
v. Thereafter, the head post offices of every district would offer passport related services, similar to those available at the passport seva kendra (PSK).
vi. The POPSK would function in the similar manner as the PSKs. Applicants who apply for their passports online through the passport portal, would be scheduled an appointment at the selected Post Office Passport Seva Kendra to complete the formalities.

Kerala CM Inaugurates e-Health Kerala scheme at Peroorkada Hospital
i. The Chief Minister of Kerala, Pinarayi Vijayan launched the IT Project, e-Health Kerala which is named Jeevan Rekha on January 25, 2017 at Peroorkada Model Government Hospital.
ii. The project has been developed by the Health Department in association with the state IT 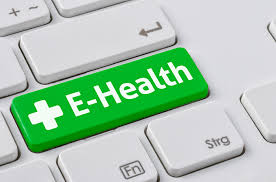 Mission. It aims to create a centralized database that will have the complete healthcare records of all the citizens in the state through the digitization of government hospitals.
iii. The pilot project would be launched in Thiruvananthapuram. After this the project will be launched in two phases. In the first phase seven districts would be covered including Kollam, Malappuram, Kasargod, Alappuzha, Idukki, Kannur and Ernakulam. The remaining districts would be covered in the second phase.
iv. The Health Minister of state K K Shylaja distributed 8,000 tablet computers to health workers to conduct the public health survey for creating the database.
v. The comprehensive health project costs around Rs. 96 crore which has been funded mostly by the central government.
vi. The project will benefit the citizens to avail the medical benefits without the need go to the hospitals. They can use the unique IDs generated for each citizen to view their health documents from anywhere.
vii .Besides, the project will allow the state to closely monitor the health of its people and can take effective control measures over contagious diseases.

Arunachal launches ‘Dulari Kanya’ scheme to check infant mortality
i. Arunachal Pradesh launched ‘Dulari Kanya’, a special scheme to check infant mortality in the state.
ii. Governor V Shanmuganathan launched the scheme, under which the government will deposit Rs 20,000 in the bank account of a girl child, born in any government hospital.
iii. It would be paid along with the accrued interest after she attains 18 years of her age.

Trump orders 2,000-mile wall to be built on Mexico border
i. United States President Donald Trump signed an executive order to enable construction of a 2,000-mile wall along the southern US border with Mexico. 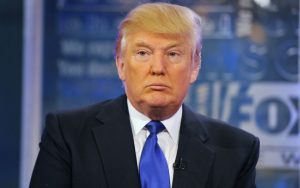 ii. The wall is aimed at stemming the flow of drugs, illegal immigration into the US.
US:
♦ President – Donald Trump
♦ Vice President – Mike Pence
♦ Speaker of the House – Paul Ryan
♦ Chief Justice – John Roberts

RBI Prohibits FDI in Non-Cooperative Countries
i. The Reserve Bank of India has prohibited the Indian entities on January 25, 2017 from making direct overseas investments in any entity that is located in ‘non co-operative countries and territories’, as identified by the inter-governmental body Financial Action Task Force (FATF).
ii. The move aims to bring down the global terror financing and thus prevent, detect and prohibit money laundering
iii. At present, there is no restriction on an Indian entity regarding the countries where it can undertake Overseas Direct Investment. The prohibition aims to align with the instructions under FEMA with the objectives of the FATF.
Financial Action Task Force (FATF)
♦ FATF was established in 1989 to set standards and promote effective implementation of legal, regulatory and operational measures for combating money laundering, terrorist financing and other related threats to the integrity of the international financial system.
♦ FATF currently comprises two regional organisations and 35 member jurisdictions, including India, US, UK, China and the European Commission. Trump appoints Indian-American attorney to key White House post
i. US President Donald Trump has appointed prominent Indian-American attorney Uttam Dhillon to a key White House position.
ii. Dhillon, who served as chief oversight counsel for the House of Representatives Financial Services Committee.
iii. He has been appointed as special assistant to the President on ethics and compliance matters. billion (27.9 billion euros).
ii. The world’s biggest producers of products ranging from baby products to band-aids, Johnson & Johnson and Actelion, a leader in medicines treating high blood pressure, will create a new Swiss-listed firm called R&D NewCo. It would focus on research and development of new drugs.
iii. Johnson & Johnson will acquire all the outstanding shares of Actelion for $280 per share with the tender offer to start by mid-February.
iv. This acquisition would enable J&J to add a new drug category to its existing business line and also become a leader in attractive and complementary therapeutic areas and serve patients with serious illnesses and significant unmet medical need

Scientists Grow Mouse Transplant Organ in Rat
i. Scientists from Stanford University are trying to find an innovative solution to deal with the shortage of human transplant organs like hearts, kidneys, livers, lungs and other organs.
ii. Thus they conducted a study wherein the scientists made an attempt to grow mouse pancreases in rats and then use them to cure diabetes in mice.
iii. The pancreatic tissue was transplanted in the mouse with five days treatment using Immunosuppressive drugs to stop their bodies rejecting the foreign matter.
iv. The study found that diabetic mice were able to normalise their blood glucose levels for over a year after transplantation.
v. Although the study does not indicate whether or not this type of transplant can be enough to save humans, or whether or not human organs can be grown in pigs and sheep, but it can lead to some significant invention in future.

Japanese Sumo Wrestler Receives Highest Sports Honour in 2 Decade
i. Japan based sumo wrestler Kisenosato was promoted to the highest rank of the wresting, “Yokozuna” on January 25, 2017 after winning his first title at the New Year Grand Sumo 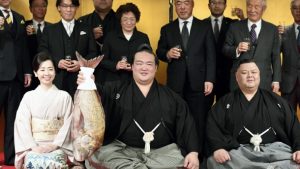 Tournament with a 14-1 record.
ii. The 30-year-old Kisenosato, whose real name is Yutaka Hagiwara, is the first Japanese born and bred wrestler to earn the coveted rank of “grand champion” since 1998.
iii. Previously, the last Japanese promoted to Yokozuna was Wakanohana in 1998. Earlier, Mongolians and Hawaiians dominated the sport of Japan for more than a decade.
iv. Usually wrestlers need to win two consecutive tournaments to be promoted. But 175 kg and 1.87 m tall Kisenosato was promoted with a win of only one title based on his consistent results in recent tournaments and the New Year title.

Usain Bolt Loses an Olympic Medal due to Positive Doping of Team-Mate Nesta Carter
i. Jamaican sprinter, Usain Bolt will have to hand back one of his nine Olympic gold medals won in the 4x100m relay event at the 2008 Beijing Olympics due to his Jamaican team-mate Nesta Carter who was tested positive for a banned substance.
ii. The International Olympic Committee (IOC) retested the 454 selected doping samples in 2016. The committee on January 25, 2017 informed that Carter was found to have the banned stimulant methylhexaneamine in his system.
iii. Carter and Bolt were teammates on the winning 4×100-meter relay team in Beijing in 2008, which also included Michael Frater and Asafa Powell. The team has been disqualified.
iv. Carter also made up Jamaica’s record-breaking relay squad which won the same event at London 2012 and is one of the country’s most successful ever athletes. i. Seven-time Emmy Award winning actress Mary Tyler Moore of United States died on January 25, 2017 in Greenwich, Connecticut. She was 80-years-old.
ii. New York born Moore began her career in 1960 with her television role in the 1960s sitcom The Dick Van Dyke Show and the later gained fame with her popular The Mary Tyler Moore Show in the 1970s.
iii. She received an Oscar nomination for best actress for her portrayal of an affluent mother in the 1980 film Ordinary People.

Nation Celebrates 68th Republic Day on January 26, 2017
i. India celebrated its 68th Republic Day on January 26, 2017. The Theme of 2017 Republic Day is: Skill India and Beti Bachao Beti Padhao.Every year this day is celebrated on January 26, as it was on this day that the Constitution of India came into force in the year 1950.
ii. This year the Crown Prince of Abu Dhabi and the Deputy Supreme Commander of the Armed Forces of United Arab Emirates (UAE), Sheikh Mohamed bin Zayed Al Nahyan was the Chief Guest at the ceremony.
iii. For the first time in the history of Republic Day, a foreign contingent of 179 UAE Soldiers led the annual parade on Rajpath.
iv. A contingent of National Security Guards, also known as the Black Cat commandos, took part in the parade for the first time
v. As a part of the Republic Day celebration, President Pranab Mukherjee conferred 3 Gallantry awards on the Indian Navy, also approved 398 Gallantry awards and other Defence decorations to Armed Forces personnel and others.