We are here for you to provide the important current affairs February 3 2018 which have unique updates of all daily events from all newspapers such as The Hindu, The Economic Times, PIB, Times of India, India Today, Indian Express, Business Standard, all Government official websites. Our complete current affairs helps you to get more marks in Banking, insurance, UPSC, SSC, CLAT, Railway and all other competitive Exams. 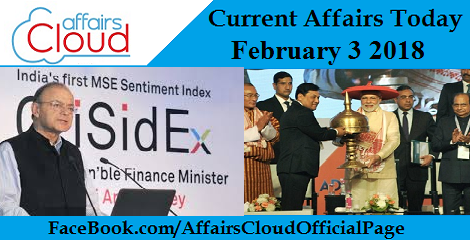 Maharashtra launches four schemes in agriculture and allied sectors
On February 2, 2018, Maharashtra State Government launched four schemes aimed at promoting entrepreneurship in agriculture and allied sectors among the economically backward segments of the state.
Overview of Four Schemes:
i. One of the scheme is about extending loan along with interest subsidy while second scheme is for promoting group farming.
ii. Third scheme is for group projects related to agro-industries and small and medium scale entrepreneurs while fourth scheme relates to skill development training in agriculture under which, training will be imparted to 2.5 lakh youths across rural Maharashtra.
iii. Beneficiaries of all the above stated schemes would be in 18 – 41 years age group.
iv. Annasaheb Patil Arthik Backward Development Corporation (APABDC) will be the nodal entity for implementation of these four schemes.
Quick Facts about Maharashtra:
♦ Capital – Mumbai (summer), Nagpur (winter)
♦ Current Governor – C. Vidyasagar Rao
♦ Current Chief Minister – Devendra Fadnavis
♦ Important National Park – Sanjay Gandhi National Park 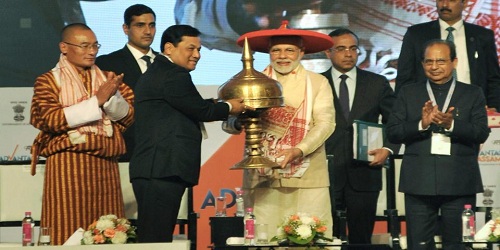 More Information about Global Investors Summit 2018:
i. The two-day Global Investor Summit 2018, aims to showcase manufacturing opportunities in Assam and related geostrategic advantages to foreign and domestic investors. The Summit is expected to position Assam as India’s Expressway to Association of Southeast Asian Nations (ASEAN) countries.
ii. Besides, the Summit will also highlight Assam’s core competencies in different sectors viz. agriculture and food processing, bamboo, organic farming, handloom, textile and handicrafts.
iii. It has been organised by the Assam State Government in association with Federation of Indian Chambers of Commerce and Industry (FICCI).
iv. Over 4500 delegates including representatives from 16 countries will attend this two-day event.
v. Several Union ministers including Nitin Gadkari and Suresh Prabhu and industrialists including Mukesh Ambani and Ratan Tata will attend the Global Investors Summit 2018.

Government to launch Kisan Urja Suraksha evam Utthaan Mahaabhiyan (KUSUM) scheme
On February 2, 2018, Power and Renewable Energy Minister, R K Singh stated that, government will implement a Rs 140000-crore Kisan Urja Suraksha evam Utthaan Mahaabhiyan (KUSUM) scheme as announced in Union Budget 2018.
Salient Features of Kisan Urja Suraksha evam Utthaan Mahaabhiyan (KUSUM):
i. KUSUM is aimed at promoting use of solar energy for pumps and encourage use of barren land for setting up decentralised solar power plants.
ii. This scheme will not only lead to increase in farmers’ income by giving them option to sell additional power to the grid  but will also reduce their dependence on diesel pumps.
iii. The scheme envisages setting up 10000-mw solar plants on barren lands and incentivising discoms to buy the produced electricity, solarising existing pumps of 7250-mw and government tube wells of 8250-mw capacity and distributing 17.5 lakh solar pumps.
iv. A central financial assistance of Rs. 48000 crore (in phased manner) has been announced for this project in Union Budget 2018. The balance will be raised by the states.
v. However, for solar pumps, farmers will have to bear 10% upfront costs.

India’s largest Floating Treatment Wetland (FTW) in Hyderabad’s Neknampur Lake:
i. The Floating Treatment Wetland (FTW) on Neknampur Lake was inaugurated on World Wetlands Day (February 2). The size of the FTW is 3,000 sq. ft.
ii. It has been formed by the joint efforts of Dhruvansh, the Hyderabad Metropolitan Development Authority, the Ranga Reddy district administration and other organisations.
iii .It has been named the largest FTW in India by the India Book of Records. It has been developed based on soil-less hydroponics technique.
iv .The FTW is planted with cleaning agents like vetivers, canna, cattalis, bulrush, citronella, hibiscus, fountain grass, flowering herbs, tulsi and ashvagandha.
v. These plants absorb excess nitrates and oxygen present in the water and reduce the content of these chemicals. It is said that, this method is very cheap compared to sewage treatment plants.
About Hyderabad Metropolitan Development Authority (HMDA):
♦ Headquarters – Hyderabad, Telangana
♦ Metropolitan Commissioner – T. Chiranjeevulu 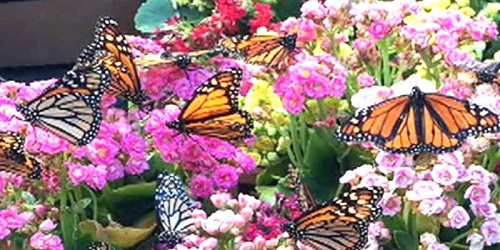 More Information about Butterfly Park in Kanpur:
i. Estimated cost for constructing this butterfly park is Rs. 1 crore.
ii. In order to attract butterflies, 100 species of flowers have been planted in the park. So far, more than 50 species of butterflies have already been spotted in this park.
iii. The Butterfly Park in Kanpur will open for public by March 2018.
iv. Butterfly parks are pollution-free spaces which do not have chemicals/pesticides and play an important role in conserving endangered butterfly species.
Quick Facts about Uttar Pradesh:
♦ Capital – Lucknow
♦ Current Governor – Ram Naik
♦ Current Chief Minister – Yogi Adityanath
♦ Important National Park – Dudhwa National Park

UK allows doctors to create three-parent babies through mitochondrial donation
UK has permitted doctors to create three-parent babies through mitochondrial donation, in a move to prevent passing of incurable genetic diseases from mothers to babies.
UK allows doctors to create three-parent babies:
i. The Human Fertilisation and Embryology Authority (HFEA) has permitted to apply the procedures to two women in Newcastle, England.
ii. This will utilize mitochondrial donation therapy for those women, who are sure that their children would inherit a neurodegenerative disorder.
iii. Mitochondrial DNA will be obtained from a donor “mother”. So that, the genetic conditions will not be passed on to the baby from the original mother.
iv. This will be the first three-parent baby in the UK. The procedures will be supervised by Mary Herbert, professor of reproductive biology.
About Human Fertilisation and Embryology Authority (HFEA):
♦ Works under – Department of Health in the United Kingdom
♦ Purpose – regulates and inspects all clinics in the United Kingdom providing in vitro fertilisation (IVF), artificial insemination and the storage of human eggs, sperm or embryos 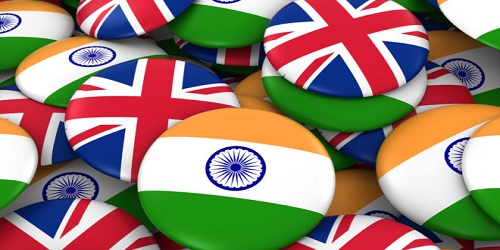 About New Manchester-India Partnership:
i. This partnership is aimed at advancing trade, investment, science and innovation ties between India and Britain.
ii. MIP was launched by Jim O’Neill, the economist who coined the phrase BRICS.
iii. It is a public-private initiative between India and Manchester and is supported by the Confederation of Indian Industry (CII).
iv. In order to carry out work related with the partnership, teams comprising permanent full time members will be stationed in Manchester, Delhi and Bengaluru.
v. Several Indian companies including Tata, HCL Technologies, Tech Mahindra, ICICI, Union Bank, Air India and  Hero Cycles represented India at a walkthrough exhibition held during the launch of MIP.

China, UNDP Pak sign $4mn assistance agreement for Fata, Balochistan
Government of China, United Nations Development Programme (UNDP) and Government of Pakistan have signed a USD 4 million agreement to provide assistance to help the people of Fata and Balochistan region in Pakistan.
i .In recent times, several reports have emerged highlighting growing atrocities of Pakistan Government on the indigenous people of Balochistan and deteriorating human rights situation as a result of the China-Pakistan Economic Corridor (CPEC).
ii .$4 mn assistance procured through China-UNDP-Pakistan agreement will be used to support the people in these regions by restoring their livelihood and helping them in rebuilding their lives.
iii. The assistance will be provided over a period of four months.
Quick Facts about UNDP:
♦ Founded in – 1965
♦ Headquarters – New York City, US
♦ Current Head – Achim Steiner Details about IWAI-World Bank Pact:
i. Along with a project agreement with IWAI, the World Bank also entered into a USD 375 million loan agreement for JMVP with the Department of Economic Affairs, Union Ministry of Finance.
ii. Post completion (by March 2023), JMVP will enable commercial navigation of vessels with the capacity of 1500-2000 tonne on NW-I. Union Cabinet has already approved raising USD 800 million for implementation of this project.
iii. Out of USD 800 million, USD 375 million will be raised through above stated loan agreement between World Bank and  Department of Economic Affairs. Remaining USD 380 million will come in the form of budgetary allocation from Central Government and proceeds from the bond issue.
iv. Another USD 45 million will be raised from private sector participation under the public-private partnership (PPP) mode.
Quick facts about Inland Waterways Authority of India (IWAI):
♦ IWAI is a statutory body responsible for regulating, developing and maintaining infrastructure for inland waterways in India.
♦ Formation Year: 1986
♦ Head Office: Noida, Uttar Pradesh
♦ Current Chairman: Nutan Guha-Biswas
♦ Receives grant from: Ministry of Shipping, Road Transport and Highways

About CriSidEx:
i. This index has been developed jointly by CRISIL & Small Industries Development Bank of India (SIDBI).
ii. It is based on 8 parameters and measures MSE business sentiment on a scale of 0  to 200, wherein 0 is ‘extremely negative’ while 200 is ‘extremely positive’.
iii. By closely following the index readings, one can get a heads-up about potential challenges in future and changes in production cycle of the entire sector.
iv. First reading of CriSidEx, based on survey covering 1100 MSEs during November-December 2017, stood at 107, indicating mildly positive sentiment.
v. Out of the 1100 MSEs covered in the survey, 550 were manufacturing units and the other 550 were services units. 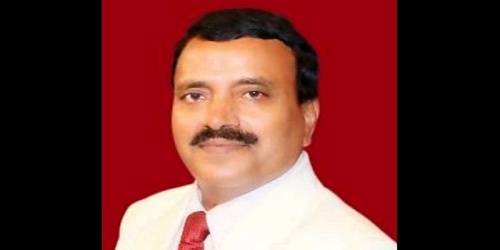 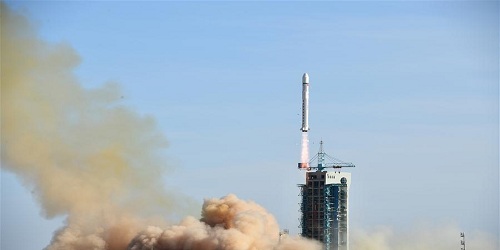 China launches its first seismo-electromagnetic satellite:
i. A Long March-2D rocket was launched from Jiuquan Satellite Launch Centre in Gobi Desert.  It carried the China Seismo- Electromagnetic Satellite (CSES) of 730 kg into a sun-synchronous orbit at a height of 500 km.
ii. Zhangheng 1 will let scientists monitor the electromagnetic field, ionospheric plasma and high-energy particles for five years.
iii. It is named Zhang Heng after a scholar of the East Han Dynasty, who initiated earthquake studies and invented the first seismoscope.
iv. Zhangheng 1 will record electromagnetic data of earthquakes above 6 magnitude in China and earthquakes more than 7 magnitude throughout the world.
About China National Space Administration (CNSA):
♦ Headquarters – Haidian District, Beijing
♦ Primary spaceport – Jiuquan Satellite Launch Center
♦ Administrator – Tang Dengjie India won U-19 Cricket World Cup:
i. India defeated Australia in the final by eight wickets. The team was led by Prithvi Shaw. Man of the Match was conferred on Manjot Kalra.
ii. This is the fourth U-19 World Cup title for India. Earlier India had won the U19 World Cup in 2000, 2008 and 2012.
About International Cricket Council (ICC):
♦ Chairman – Shashank Manohar
♦ President – Zaheer Abbas
♦ CEO – David Richardson
♦ Headquarters – Dubai, United Arab Emirates 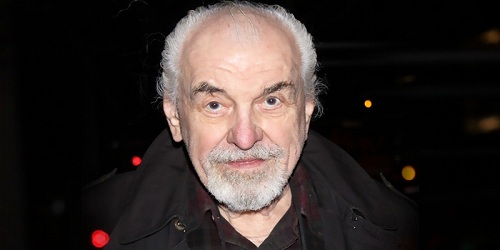 Death of Louis Zorich:
i. Louis Zorich was 93 years old. He was well-known for the TV show show “Mad About You”.
ii. He has acted in movies like Coogan’s Bluff, Popi, Cold Turkey, Fiddler on the Roof, The Muppets Take Manhattan, and Dirty Rotten Scoundrels. He was nominated for Tony award in 1969.
About Tony Award:
♦ Presented by – American Theatre Wing and The Broadway League
♦ Awarded for – Excellence in Broadway theatre
♦ Country – United States