We are here for you to provide the important current affairs August 8 2018 which have unique updates of all daily events from all newspapers such as The Hindu, The Economic Times, PIB, Times of India, India Today, Indian Express, Business Standard, all Government official websites. Our complete current affairs helps you to get more marks in Banking, insurance, UPSC, SSC, CLAT, Railway and all other competitive Exams. PHDCCI and CNI sign MoU to set up Indo-Nepal Centre
On 1st August 2018, PHD Chamber of Commerce and Industry (PHDCCI) and Confederation of Nepalese Industries (CNI) signed a memorandum of understanding (MoU) to establish India-Nepal Centre. 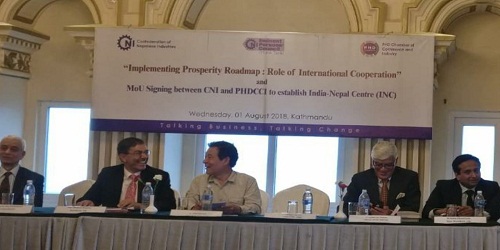 PHDCCI and CNI sign MoU to set up Indo-Nepal Centre:
i. The MoU was signed by Anil Khaitan, President of PHDCCI and Hari Bhakta Sharma, President of CNI, in Kathmandu, Nepal.
ii. This MoU will help in strengthening economic engagement between India and Nepal.
iii. This MoU aims to promote Indian investment in Nepal, work with Indian ventures in Nepal to tackle problems faced by them, enhance industrialization in Nepal and train Nepali entrepreneurs.
iv. Finance Minister of Nepal, Dr.Yuba Raj Khatiwada and Indian Ambassador to Nepal Manjeev Singh Puri were also present when the MoU was signed.
About PHD Chamber of Commerce and Industry (PHDCCI):
♦ Established – 1905
♦ Headquarters – New Delhi Funding of Central Share of 99 Prioritized Irrigation Projects:
i. This MoU will help Ministry of Water Resources, River Development and Ganga Rejuvenation (MoWR, RD & GR) to release Central Assistance to prioritized projects under PMKSY according to the needs in a timely manner.
ii. Under PMKSY, 99 ongoing irrigation projects were identified to be finished in mission mode by December 2019.
iii. Total fund needed for finishing these projects was estimated at Rs. 77,595 crore (with a split up of Rs. 48,546 crore for project works; Rs. 29,049 crore for Command Area Development works) with Central Assistance of Rs. 31,342 crore.
iv. On 6th September 2018, a tripartite Memorandum of Agreement (MoA) was signed by Government of India (through MoWR, RD & GR), NABARD and NWDA for funding of Central Assistance for 99 irrigation projects through LTIF.
v. In 2016-17 and 2017-18, cumulative loan amount of Rs. 7863.60 crore was availed from LTIF to fund these projects.
vi. Department of Economic Affairs, Ministry of Finance has modified some existing mechanism of funding these 99 projects under LTIF, based on source of funds, liability towards servicing of coupon on bonds, repayment pattern of loan and rate of interest on loan, etc. So, the earlier signed MoA has been revised.
About Pradhan Mantri Krishi Sinchayee Yojana (PMKSY):
♦ Launched in – 2015-16
♦ Launched by – Central Government
♦ Vision – to enable access to protective irrigation for all agricultural farms in India, and to produce ‘per drop more crop’, to bring rural prosperity 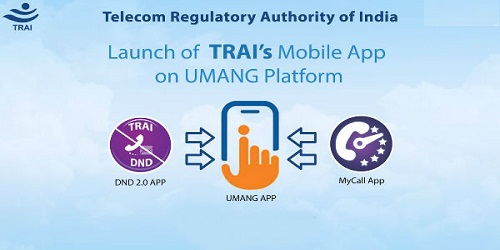 Objective:
To reach out to the consumers and to safeguard their interests
Key Points:
Presently, Umang has more than 50 lakhs downloads and TRAI apps individually have more than 4 lakhs downloads.
TRAI MyCall App:
i. It is an application for crowd sourced Voice Call Quality Monitoring.
ii. It helps Mobile phone users to rate their experience about voice call quality in real time.
iii. The customers would select their rating in the form of stars and indicate if the calls were made in indoor, outdoor or while travelling.
iv. Callers can also provide additional details such as noise or audio delay or mark a call-drop.
DND 2.0 App:
i. DND (Do Not Disturb) Services App enables smart phone users to register their mobile number under DND.
ii.  It would avoid Unsolicited Commercial Communication (UCC)/Telemarketing Calls/SMS.
About UMANG Platform:
♦ UMANG (Unified Mobile Application for New-age Governance) is developed by National e-Governance Division (NeGD), Ministry of Electronics and Information Technology (MeitY).
♦ It provides a single platform for all Indian Citizens to access pan India e-Gov services ranging from Central to Local Government bodies.

iv. It also provides incentive for completing immunisation within two years of birth
v. The list of the girls who have cleared the intermediate examination this year will be given Rs 10,000 under this scheme.
Other Announcements:
i. The amount under the ‘Bicycle Yojna’ has been increased from Rs 2500 to Rs 3000 .
ii. The amount for purchase of sanitary napkin has been increased to Rs 300 from existing Rs 150 under the ‘Kishori Swasthya Yojna.’ 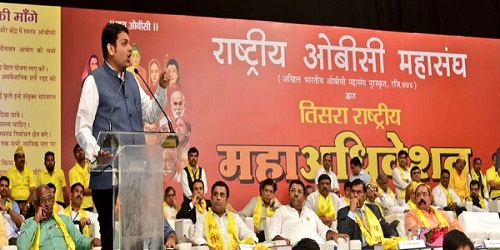 Special assistance of Rs 500 crore for OBC community:
i. This announcement was made by Maharashtra Chief Minister Devendra Fadnavis  at the 3rd National Convention of National OBC Association in Mumbai.
ii. He denied reports stating that, Maratha community may be included in the OBC category for reservation purpose.
iii. Maharashtra government has also recommended to the Centre to award Bharat Ratna posthumously to 19th-century social reformer Jyotiba Phule and his wife Savitribai Phule, who is a pioneer of women’s education.
iv. The government will assess the extent of representation offered to OBCs in jobs and take measures to address the backlog, in a timely manner.
v. The government has also earmarked funds to construct hostels for OBC students in 19 districts.
vi. OBCs constitute 52 % of Maharashtra’s population. They have been given 17 % reservation.
vii. The Maratha community constitute 30 % of Maharashtra’s population. They have been demanding 16 % reservation in jobs and educational institutes.
Some National Parks in Maharashtra:
♦ Sanjay Gandhi National Park
♦ Gugamal National Park 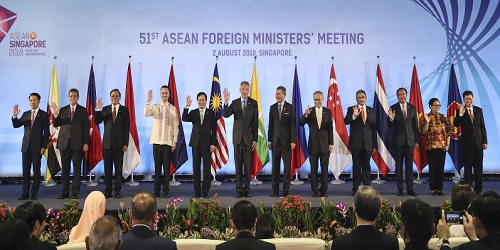 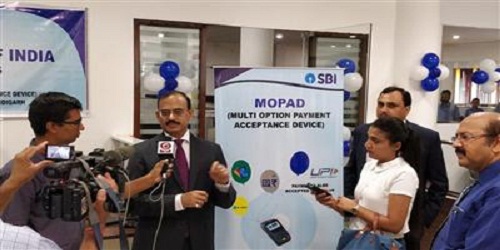 ii. It is a Point of Sale (PoS) terminal that will allow to facilitate transactions from cards to QR code based payments.
iii .It would accept payments through UPI, Bharat QR, and SBI Buddy wallet which till now required different tools to receive payments.
iv. Customers won’t have to carry cards and can just scan the QR code to make the payment.
Background:
SBI has 6.23 lakh PoS terminals where debit and credit cards are swiped to make payments. i. These appointments were proposed by the Department of Financial Services.
ii. S  Gurumurthy is the editor of Tamil political weekly Thuglak and the co-convener of RSS affiliate Swadeshi Jagran Manch. This is his 1st term as an RBI director.
iii. Satish Marathe is the patron of an NGO called Sahakar Bharati.Sixty-eight-year old Marathe had worked with Bank of India and later became the chairman of United Western Bank, which was merged with IDBI Bank.
iv. RBI’s board now has 10 government-appointed members.

Tokyo 2020: First Olympics to deploy facial recognition technology to increase security.
On August 8, 2018, it was announced that the Tokyo 2020 will be the first Olympics to deploy facial recognition technology to increase security.
i. The Olympic organizers have partnered  with NEC, a Japanese telecommunications and information technology firm, to develop the first system of this kind.
ii. It will use IC chips within identification cards to automatically verify the identity of those entering over 40 venues.
iii. It is the fastest system where the technology takes only 0.3 seconds to match up face with pre-registered photo.
iv. This was 2.5 times faster than using barcodes and visual checks.
v. More than 300,000 athletes and Games staff will submit photographs to a database before the Olympics start in July 2020.
v. It was first reportedly tested during the Rio 2016 Olympics.
Tokyo Olympics 2020:
♦ No. Of Events: 33 sports.
♦ Venue: Tokyo, Japan.
♦ Date: 24th July 2020.

Former Tamilnadu CM and leader of DMK Mr.M Karunanidhi Passed away
On August 8, 2018, DMK chief and five-time Chief Minister of Tamil Nadu M Karunanidhi died at the age of 94 in Chennai. i. Mr Karunanidhi became a Chief Minister in 1969,1971,1989,1996 & 2006.
ii. He was popularly referred to as Kalaignaror the artist.
iii.Maanavanesan was his first manuscript magazine.
iv. In 1971 he created history by winning 184 Assembly constituencies.

Kannada poet Sumatheendra Nadig, a link of Navya tradition, passes away
On 7th August 2018, Kannada writer, poet, critic and translator Sumatheendra R. Nadig, died following a short term illness, in Bengaluru, Karnataka.
Death of Sumatheendra Nadig:
i. Sumatheendra Nadig was 83 years old. He was an advocated of the Navya literature movement (modernist tradition) in Kannada language.
ii. He had published 11 poetry collections. His popular poetry collection Dampatya Geeta has been translated into several languages.
iii. He had published 10 translations from several languages. He taught at Viswa Bharati, Shantiniketan, as a visiting professor.
iv. He was also a Fellow at Jadhavpur University. Also, he taught part-time at the Department of English, Temple University, Philadelphia. He was the editor at Bappco Publishing and a reader of English at Bangalore University.
v. He was chairperson of National Book Trust from 1996 to 1999. He had won the Karnataka Sahitya Academy award 3 times in 1994, 1997 and 1999.
vi. He had also received other awards like Karnataka Rajyotsava Prashasti, Dinakara Pratisthana Prashasti, V.M. Inamdar Prashasti, and M.V. Si. Puraksara.
vii. He had received an honorary doctorate for his work on poems by Jnanapith awardee Dattatreya Ramachandra Bendre.
About National Book Trust, India:
♦ Chairman – Baldeo Bhai Sharma
♦ Location – New Delhi