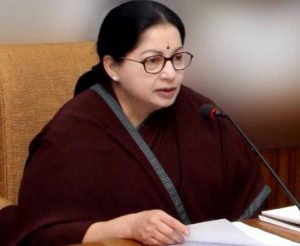 i. Tamilnadu Chief Minister J Jayalalithaa have granted cash prize of Rs 1.45 crore to five Sports Persons who has won international Sports  honors.
ii. The CM has granted Rs 25 lakh to Jenitha Anto of Tiruchirappalli for winning an international chess tournament for the fourth time in Serbia.
iii. The other persons who had received the grant of Rs 55 lakh to C Ajith Kumar for winning three medals in the competition including gold in medley relay.
iv. The list also includes R Naveen of Chennai who received Rs 25 lakh for winning gold in medley relay while Women’s medley relay player L Samayasri of Coimbatore and Triple Jump player S Priyadarshini of Chennai were given Rs 20 lakh each for winning silver title.
Tamilnadu:
♦ Capital: Chennai
♦ Chief Minister: Jayalalithaa
♦ Governor: Rosaiah

Newly designed web portal of Home dept launched in Odisha
i. Odisha Chief Minister Naveen Patnaik has launched a web portal of the Home department at the Secretariat in Bhubaneswar.
ii. The new Web portal has been designed by the National Informatics Centre (NIC) featured with accessibility guidelines that can be used by the differently-abled persons to see and hear the website.
iii. The web-portal hosted in National Cloud MeghRaj that made available in Odia and English languages, it also has enable access to all directorates of departments as well as services like Secretariat Pass, Tracking the Missing Child, Reservation of Odisha Bhawan, CCTNS. 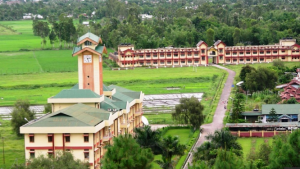 i. Union Agriculture Minister Radha Mohan Singh has inaugurated College of Veterinary Sciences and Animal Husbandry in Peren District of Nagaland under Central Agricultural University (CAU) Imphal MP.
ii. The Veterinary University has established seven colleges in the scope of advancement of human resource and agricultural and allied sciences, during the 12th Five Year Plan.
iii. In this regard recently Union Cabinet had given its nod for the amendment of CAU Act, 1992 to take in Nagaland under the jurisdiction of the Central Agricultural University, Imphal.
iv. For the establishment of the college Nagalnad government has provided suitable land free of cost to help the people to achieve higher growth in animal husbandry sector.
v. The Minister also inaugurated Krishi Vigyan Kendra (KVK) farm science centre in Peren. He also said that one Seed Hub is being established in ICAR Research Complex for NEH Region, Tripura Centre in Agartala. 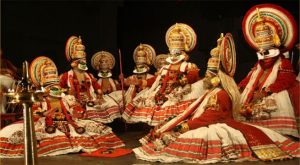 i. Kerala’s classical Indian dance Kaathakali has been performed by troupe (group of dancers) that wooed the audience during its performances in different cities of Egypt for the first time.
ii. The group of dancers of Kaathakali comprising 9 members visited Egypt as part of the 14th Summer Festival organized by Bibliotheca Alexandrina also to perform in other cities including Port Said, Ismailia and the Egypt Society for Culture and Development in Cairo.
Kathakali:
The term Kathakali is derived from Katha (means -story, conversation) and Kali which means performance, art. The dance is one of the major forms of classical Indian dance. The dance performance includes music, vocal performers, hand and facial gestures to express ideas, and footwork.

BSE signs MOU with IIT Kanpur
The Bombay Stock Exchange (BSE) has signed an MoU (Memorandum of Understanding) with IIT Kanpur for developing tools for strengthening cybersecurity and advising the stock exchange on current and future cyber related issues.
i. The key highlights of the MoU include
1.Cooperation for cyber security research in financial markets,
2.Developing an environment to deal with cyber security challenges and
3.Tools to strengthen cyber security as also to advise BSE in its cyber related issues.
ii. Among others, the institute will assist BSE in testing its vulnerabilities in IT system and network and help forming guidelines and auditing security operations.
iii. BSE has an encumbrance to create comprehensive robust and resilient cyber security framework. So it tied up with IIT Kanpur, as it is India’s leading academic institute in computer science. A research tie-up with them will enhance the academic-corporate collaboration.
About BSE :
♦ Name- Bombay Stock Exchange,
♦ CEO – Ashish Chauhan
♦ Establishment -1875

Indo-Russian project to replace An-32 in limbo
i. The medium 20-tonne transport aircraft that have been planned to replace the An-32s to be jointly developed by India and Russia, seems uncertain as the delay persists.
ii. In the scope of the project India having second thoughts, however Russia planned to move with the initial design as per the agreement.
The Stalled Agreement:
iii. India and Russia has inked agreement in 2007 to develop and produce the 20-tonne aircraft to replace the An-32 transport aircraft in service in both the Indian and Russian air forces.
iv. Upon the agreement a joint venture has been established by Hindustan Aeronautics Ltd. (HAL) and the United Aircraft Corporation (UAC) of Russia with an investment of $300 million each.
v. The Engine details were not clear in the agreement as a result differences over the nature of the engine made the project in limbo.
Agreement to upgrade the Lifespan of An-32:
In the meantime IAF planned to upgrade of the An-32s to extend their service life from 25 to 40 years. Upon this move a contract agreement was signed with Ukraine in 2009 to upgrade 40 aircraft in Ukraine. 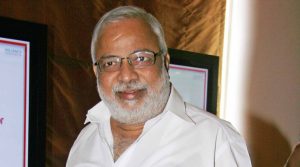 Bollywood filmmaker N Chandra was honored with the Lifetime Achievement award during the 8th Goa State Film Festival held at Goa between August 5-8.
i. N. Chandra or Chandrashekhar Narvekar (born 4 April 1952) is an Indian producer, writer and director, known for gritty realism, in his early dark and loud films such as Ankush,Pratighaat, Tezaab and Narsimha (1991). Chandra also made the successful but critically scorned Style and its sequel Xcuse Me.
ii. He worked as associate director and editor in Anil Kapoor starrer Woh 7 Din (1983).Eventually, with Ankush, his directorial debut, in 1986, Chandra began his projection of the angry young man.
iii. Influenced by Gulzar’sMere Apne, he wrote, directed, produced and edited the film about four frustrated unemployed men who roam the streets of Bombay, which also starredNana Patekar. Made at a budget of Rs 12 lakh, the film and grossed Rs 95 lakh to become surprise hit of 1986, the year when many blockbusters failed.
iv. The following year he remade Telugu film,Pratighatana(1986) as Pratighaat (The Revenge, 1987), starring Sujata Mehta and Nana Patekar, a film on the gruesome reality of politics in India.
v. With Tezaab, N Chandra scored a box office hat-trick at his previous hits,Ankush (1986)
and Pratighaat (1987). In early 2014, reports of a sequel of hit film Tezaab with a new cast made news.
vi. The festival, which will showcase 12 films across three different venues, has been organized by ESG and State Information and Publicity Department. Naik said nine Konkani, two Marathi and a short film produced by Goans were screened during the festival.

CSS Corp appoints Manish Tandon as its new CEO
i. US based Global tech major CSS corporarion has named Manish Tandon as its new Chief Executive Officer of the firm. He will replace (Tiger) TG Ramesh who has been transferred as a Non-executive Board director.
ii. Tandom is currently the head of Healthcare & Life Sciences, Insurance and High-Tech Manufacturing businesses at Infosys.
iii. He also work as a director in Infosys Lodestone, Infosys Public Services and EdgeVerve board also upon this new appointment he will concurrently to be inducted in to the Board as a whole time Director in CSS.
iv. He graduated from IIT Kanpur and also  Gold Medalist from IIM Bangalore.
CSS Corporation:
♦ Founded: 1996
♦ Headquarters Milpitas, United States
♦ CEO: Manish Tandon

China holds first nuclear security emergency drill
i. China has held its first comprehensive nuclear security emergency drill Code-named as Fengbao-2016 to expand the nuclear power generation.
ii. The drill was chaired by Science, Technology and Industry for National Defense vice director Wang Yiren to test and improve security-incident response mechanism.
iii. China had 27 nuclear power plants that in operation as of October 2015, with a total installed capacity of 25.5 GW, while the country constructing 25 units with a total installed capacity of 27.51 GW.
iv. The country also stepping up the installed nuclear power capacity to 58 GW, besides it also to generate 30 GW by 2020.

12,300-year-old fire pit found in northern Utah
i. A team of archaeologist’s spots the ancient tribal fire pit with tools, a spear tip and tobacco seeds that is 12,300 years old on a military testing range in northern Utah in the United States.
ii. The news reported by The Standard Examiner the team has disclosed that the household at Hill Air Force Base, which is south of Ogden. The artifacts discovered will be looked after at the Natural History Museum of Utah.
iii. The team Research Group collected charcoal, animal bone fragments and other remnants from the cooking pit.

Kannada comedy actor Sanketh Kashi died of a heart attack at a private hospital in Mandalpalya, Bangalore.
i. Kashi started his career with theatre and was known as ‘Sanketh’ Kashi for his association with Sanketh troupe, which was led by late actor Shankar Nag.
ii. He was 50 and he has acted in more than 140 films.
iii. Kashi, who hailed from Shivamogga, was a B.Sc graduate and he started his career as a theatre artiste. He was closely associated with late actor Shankar Nag’s Sanketh troupe.
iv. He made his debut in films with “Madhu Masa” in 1989. He played comic roles in most of these movies and he won the hearts of audiences with his unique mannerisms and dialogue delivery.

‘Vietnam Veedu’ Sundaram passes away
Tamil Script writer and director Vietnam Veedu Sundaram died in Chennai. He was 76
i. Sundaram was born in Tiruchi and Vietnam Veedu became part of his name after he wrote the script, first for the eponymous play and then for the film, starring Sivaji Ganesan.
ii. He had worked with Sivaji Ganesan, MGR, Amitabh Bachchan and Kamal Haasan.

Prime Minister, Shri Narendra Modi, quoted that handlooms can be a tool to fight poverty, just as swadeshi was a tool in the struggle for freedom and he quoted that Khadi and handloom products provide the same warmth that mother’s love provides on the fabulous National Handloom Day on August 7.
i. The main function was held in Varanasi in which Sant Kabir Awards(three) and National Handloom Awards(20) presented by Irani.An MoU was signed between the Ministry of Skill Development and Entrepreneurship (MSDE) and the Ministry of Textiles on National Handloom Day to “bring a paradigm shift in the handloom industry”.
ii. The government launched National Handloom Day on August 7, 2015, to commemorate the celebration of aesthetics and indigenous talent.
iii. 7thAugust was notified by the Government of India as National Handloom Day vide Gazette Notification dated 29th July, 2015 with the objective to generate awareness about the importance of handloom industry and its contribution to the socioeconomic development of the country in general and to promote handlooms, increase income of weavers and enhance their pride in particular.
iv. It is noted that the first National Handloom Day was celebrated last year and Hon’ble Prime Minister was the Chief Guest in the main event held in Chennai on 7th August, 2015.