We are here for you to provide the important current affairs August 17 2018 which have unique updates of all daily events from all newspapers such as The Hindu, The Economic Times, PIB, Times of India, India Today, Indian Express, Business Standard, all Government official websites. Our complete current affairs helps you to get more marks in Banking, insurance, UPSC, SSC, CLAT, Railway and all other competitive Exams. 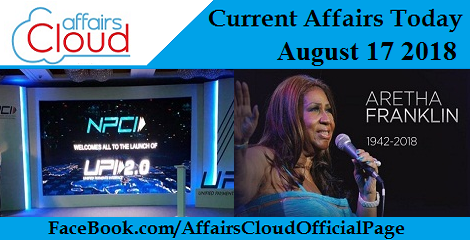 Central government constituted a Panel headed by CWC chairman to coordinate the discharge of floodwaters from Kerala-TN inter-State projects
On August 17, 2018, on the event of heavy rainfall and flood in Kerala, the Central government has constituted a coordination committee to work on the discharge of floodwaters between Kerala-Tamilnadu.
i. The committee is headed by the Central Water Commission Chairman Narendra Kumar to coordinate the discharge of floodwaters from inter-State projects involving Kerala and Tamil Nadu,
ii. The inter-state projects would include Mullaperiyar and Aliyar.
iii. The Chairman of the CWC will monitor the situation at Mullaperiyar dam in view of rising water level and continued heavy inflow.
Background:
As the water level Mullaperiyar has crossed 142 ft the Supreme Court has approved the application seeking Central governments intervention in the matter.
Kerala:
♦ Chief Minister: Pinarayi Vijayan.
♦ Capital: Thiruvananthapuram.
♦ National Parks: Anamudi Shola National Park, Eravikulam National Park, Mathikettan Shola National Park, Pambadum Shola National Park, Periyar National Park, Silent Valley National Park.
♦ Dams: Mullaperiyar Dam, Idukki Dam, Idamalayar Dam, Banasura Sagar Dam.
♦ Kerala has 44 rivers and 42 dams. i. It would be inaugurated by union minister of food processing industries, Harsimrat Kaur  Badal.
ii. The theme of the conference is: ‘Doubling Farmers Income through Food Processing’
iii. In the event:

Panel headed by B Sesikeran to review red-labelling draft of FSSAI
On August 17, 2018, bill for red-labelling of packaged products containing fat, sugar and salt has been halted by the government as per FSSAI’s report.
i. Additionally, a group of experts from health and nutrition background has been set up to look into the issue of labeling.
ii. The group is headed by B Sesikeran, former director of National Institute of Nutrition (NIN) as well as the current director Hemalatha and doctor Nikhil Tandon.
iii. It will study in detail the concerns of the industry and make recommendations.
Other Announcements:
Although FSSAI CEO suggest that Food Safety and Standards Authority of India (FSSAI) will go ahead with the labelling norms even if there is no full consensus on the matter after the panel’s suggestions.
About Food Safety and Standards (Labelling and Display) Regulations 2018:
In April, food safety regulator FSSAI had come out with the draft of Food Safety and Standards (Labelling and Display) Regulations 2018 that proposed mandatory red-label marking on packaged products for the consumer to identify between healthy and un-healthy food.
FSSAI:
♦ Headquarters: New Delhi.
♦ CEO: Pawan Kumar Agarwal.

i. The festival was organized by Films Division, Ministry of Information and Broadcasting.
ii. It was inaugurated by Smt. Rama Khandwala, a freedom fighter and Indian National Army (INA) veteran.
iii. Documentary films on freedom struggle and freedom fighters were screened at the festival. i. The new version has been developed by the National Payments Corporation of India (NPCI).
ii. It will allow the customers to use overdraft limit for making payments for merchants.
iii. This has been made in need for ensuring adequate importance on cyber security.
iv. UPI 2.0 member banks as on date are: State Bank of India, HDFC Bank, Axis Bank, ICICI Bank, IDBI Bank, RBL Bank, YES Bank, Kotak Mahindra Bank, IndusInd Bank, Federal Bank and HSBC.
Features of the improved UPI 2.0:
i. The UPI 2.0 has enhanced features such as :

RUCO (Repurpose Used Cooking Oil): FSSAI’s initiative to collect & convert used cooking oil into biofuel
On 10th August 2018, Food Safety and Standards Authority of India (FSSAI) launched RUCO (Repurpose Used Cooking Oil) initiative for collection and conversion of used cooking oil into bio-diesel.
RUCO (Repurpose Used Cooking Oil):
i. Under RUCO, 64 companies at 101 locations have been identified to enable collection of used cooking oil.
ii. According to FSSAI, India has the potential to recover 220 crore litres of used cooking oil for the production of biodiesel by 2022.
iii.As per FSSAI regulations, the maximum permissible limits for Total Polar Compounds (TPC) is 25 %. Beyond this limit, the cooking oil is not safe for consumption.
iv. FSSAI is working in partnership with Biodiesel Association of India and the food industry to make sure that used cooking oil regulations are followed properly.
v. FSSAI will also publish guidance documents, tips for consumers and posters regarding this. It is also conducting awareness campaigns through its e-channels.
About Food Safety and Standards Authority of India (FSSAI):
♦ CEO – Pawan Kumar Agarwal
♦ Headquarters – New Delhi 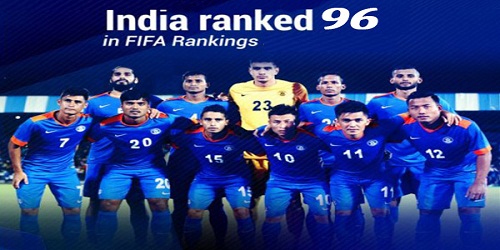 India – 96th rank in FIFA rankings:
i. Indian football team was ranked 97th in the previous week. In the latest FIFA rankings, they share the 96th position with Georgia.
ii. India’s improvement in the ranking is seen after the introduction of a new ranking system called ELO by FIFA.
iii. As per ELO, points will be added or subtracted to a national team’s already existing total before a match.
iv. Top five positions in the latest FIFA rankings:

iii. This decision was taken by the Asian Cricket Council (ACC).
About Asian Cup:
i. This tournament would be held from September 15 to 28 in Abu Dhabi and Dubai.
ii. Countries participating in the event are :Afghanistan, Bangladesh, India, Pakistan and Sri Lanka .They will be joined by a sixth team — the winner of the Asian Cricket Council qualifier event.
iii. The major attraction of this tournament is two assured Indo-Pakistan clashes.
Background:
The event was originally scheduled in India with BCCI playing the hosts but Pakistan’s participation was an issue considering the prevailing political situation between the neighbouring countries.
Asian Cricket Council (ACC).
♦ Headquarters: Kuala Lumpur, Malaysia.
♦ Founded: 1983.
♦ Member Countries: 25 . 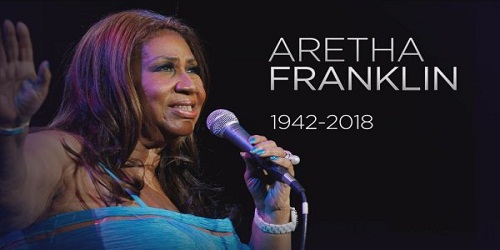 Death of Aretha Franklin:
i. Aretha Franklin was 76 years old. She was born in Memphis, Tennessee, US. She made her debut performance in 1961.
ii. In the late 1960s, she earned the title “Queen of Soul”. Some of her hit songs are: “Respect”, “Natural Woman” and “Chain of Fools.”
iii. She won the Grammy Award 18 times. She was the first female vocalist to be inducted into the Rock & Roll Hall of Fame. In 2006, she received the Presidential Medal of Freedom.
iv. She performed at the inaugurations of three US Presidents: Jimmy Carter, Bill Clinton, and Barack Obama.