We are here for you to provide the important current affairs April 26 2018 which have unique updates of all daily events from all newspapers such as The Hindu, The Economic Times, PIB, Times of India, India Today, Indian Express, Business Standard, all Government official websites. Our complete current affairs helps you to get more marks in Banking, insurance, UPSC, SSC, CLAT, Railway and all other competitive Exams. 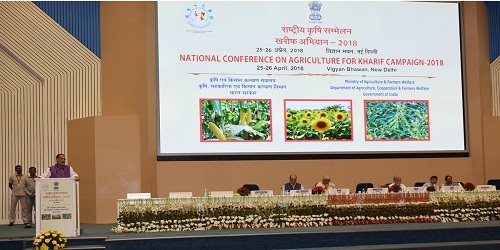 Highlights of National Kharif Conference 2018:
i. While addressing the conference, Mr. Singh outlined that the Central Government is working towards making agriculture policy and programs ‘income-oriented’ rather than ‘production-oriented’.
ii. PM Modi’s multi-dimensional Seven-point Strategy: In order to achieve this objective, government is encouraging the adoption of ‘multi-dimensional seven-point’ strategy suggested Prime Minister Narendra Modi, which includes enhancing irrigation coverage focusing on ‘More crop per drop’, provision of quality seeds, large investments in warehouses and cold chains, promotion of value addition through food processing, Implementation of National Agricultural Markets and e-platforms (e-NAM), introduction of crop insurance and promotion of allied activities such as Dairy-Animal husbandry, Poultry, Horticulture, and Fisheries.
iii. Mr. Singh added that farmers should be encouraged to participate in the ongoing Rashtriya Gram Swaraj Abhiyan, in which every block will organize Kisan Kalyan Karyashala on May 2, 2018 wherein Agriculture officers and scientists will discuss ways to increase income through new technology and progressive farmers will also narrate their success stories. Government awards LoI under ‘Adopt a Heritage Project’:
i. The third award ceremony of ‘Adopt a Heritage Project’ was conducted in New Delhi by Ministry of Tourism in collaboration with Ministry of Culture and Archaeological Survey of India (ASI) and State/UTs Governments.
ii. ‘Adopt a Heritage Scheme’ was launched on World Tourism Day i.e. September, 27 2017 by President Ram Nath Kovind. This scheme has been initiated by Ministry of Tourism in close collaboration with the Ministry of Culture and Archaeological Survey of India (ASI).
iii. Under this scheme, Ministry of Tourism invited private and public sector entities to adopt as many as 116 ASI-protected monuments/sites and to take up the responsibility for its maintenance, conservation and development.
iv. The project received encouraging response and so far 31 entities have been shortlisted by the Oversight and Vision Committee. 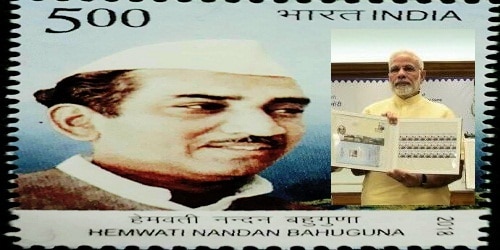 Commemorative postage stamp on Hemvati Nandan Bahuguna:
i. While releasing the commemorative postage stamp, PM Modi mentioned about Mr. Bahuguna’s contributions in the education sector and development in the hilly areas of India.
ii. Hemvati Nandan Bahuguna was the 9th Chief Minister of Uttar Pradesh. He held office from November 8, 1973 to November 29, 1975. 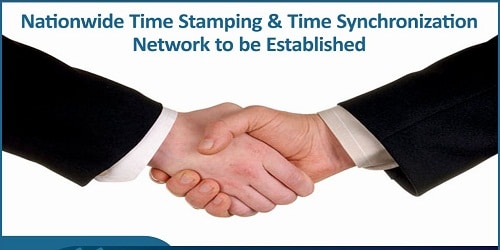 Setting up Time Stamping & Time Synchronization network of India:
i. Recording date and time of an event is referred to as time stamping.
ii. As per the terms of the MoU, DoT will be setting up Nationwide, Time Stamping & Time Synchronization network consisting of 22 Time Synchronization Centers (TSC’s) with technical assistance from CSIR-NPL.
iii. This network will provide synchronizing pulse in Indian Standard Time(IST) to all Telecom & Internet Service providers across India.
iv. Synchronizing the telecom network with IST time stamp will enable the security agencies to overcome the difficulty in analyzing and correlating the cyber events and will also improve the telecom network efficiency by reducing the Voice over Internet Protocol (VOIP) call drop.
v. In context of this news, it is important to note that CSIR-NPL is responsible for generating, maintaining and disseminating Indian Standard Time (IST).

Commissioning of Third Ship of Landing Craft Utility Mk-IV ‘IN LCU L53’ (GRSE Yard 2094) at port Blair- 25 Apr 18
On 25th April 2018, the third ship of the Landing Craft Utility (LCU) Mk-IV project was inducted into the Indian Navy at Port Blair.
Commissioning of Third Ship of Landing Craft Utility Mk-IV ‘IN LCU L53’ (GRSE Yard 2094):
i. The ship was commissioned as INLCU L53 by Vice Admiral Bimal Verma, AVSM, ADC, Commander-in-Chief A&N Command.
ii. It was designed and built by Garden Reach Shipbuilders and Engineers (GRSE), Kolkata.
iii. The ship shows the potential of India’s indigenous ship building capability. It is in line with the ‘Make in India’ initiative.
iv. LCU MK-IV is an amphibious ship. It has a displacement of 830 Tons. It is capable of transporting combat equipment like Main Battle Tanks Arjun, T72 and other Armoured Vehicles.
v. The ship has advanced equipment and advanced systems like Integrated Bridge System (IBS) and the Integrated Platform Management System (IPMS).
vi. Indigenous CRN 91 Gun with Stabilised Optronic Pedestal offers offensive capability for undertaking patrolling.
vii. The ship is commanded by Lt Cdr Vikas Anand. It has five officers and 45 sailors.
viii. It can carry 160 troops in addition. The ships will be based in the Andaman and Nicobar Command.
ix. Remaining five ships of the project are in an advanced stage of construction. They will be inducted into Indian Navy in the next year and half.
About Garden Reach Shipbuilders and Engineers (GRSE):
♦ Chairman – VK Saxena
♦ Headquarters – Kolkata 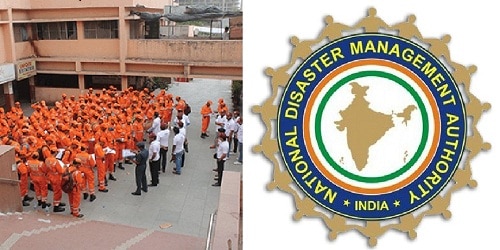 Details about mock exercise:
i. Conducting such mock exercise was required as these three states fall under seismic vulnerability zone V.
ii. The mock exercise helped in filling gaps, ensuring better communication and improving coordination among various stakeholders and agencies that are a part of response mechanism.
iii. It also generated awareness among the local people about the Do’s and Don’ts to be followed before, during and after an earthquake.
iv.With an objective to improve preparedness and response for various disaster situations, NDMA has so far conducted more than 600 mock exercises for various disaster situations across India.
Quick Facts about NDMA:
♦ Founded in – 2005
♦ Headquarters – New Delhi
♦ Parent Entity – Union Ministry of Home Affairs 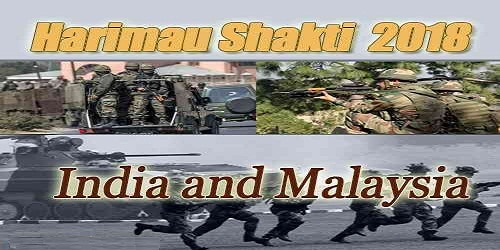 HARIMAU SHAKTI:
i. Harimau Shakti is aimed to enhance cooperation & coordination between armed forces of India and Malaysia and to share the expertise of both the contingents.
ii.  Counter insurgency operations will be conducted in jungle terrain. Indian contingent will be represented by 4 GRENADIERS, one of the oldest infantry battalions.
iii. The Malaysian contingent will be represented by soldiers from 1 Royal Ranjer Regiment and the Royal Malay Regiment.
iv. This is the first time a joint training exercise of this magnitude comprising Indian and Malaysian soldiers is conducted in Malaysia.
v. Main focus of the exercise will be on tactical operations in jungle warfare. A cross training phase and a field training phase of seven days in the jungles of Hulu Langat will be carried out.
About Indian Army:
♦ Chief of the Army Staff (COAS) – General Bipin Rawat
♦ Headquarters – New Delhi 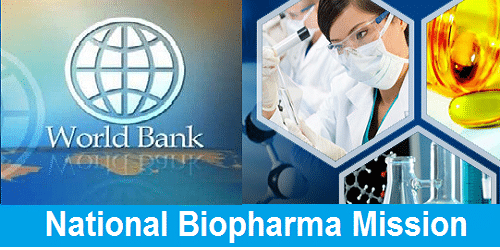 About NBM and Legal Agreement with World Bank:
i. National Biopharmaceutical Mission is the first ever Industry-Academia mission to accelerate biopharmaceutical development in India. This programme has been named Innovate in India (i3).
ii. It is a $250 million dollar initiative that includes a $125 million loan from the World Bank.
iii. Objective of this programme is to make India a hub for design and development of novel, affordable and effective biopharmaceutical products.
iv. The thrust areas for the mission are vaccine development, biotherapeutics, diagnostics and development of medical devices.
v. The mission will be implemented by Biotechnology Industry Research Assistance Council (BIRAC), a Public Sector Undertaking of Department of Biotechnology, Union Ministry of Science & Technology.
vi. On April 24, 2018, a Legal Agreement for flexible financing arrangements for this NBM was signed between BIRAC, Department of Economic Affairs under Union Ministry of Finance and International Bank for Reconstruction and Development (a member institution of World Bank Group).
Quick Facts about World Bank:
♦ Formed in – 1945
♦ Headquarters – Washington D.C., US
♦ Current President – Jim Yong Kim Mobile App (m-Awas):
i. m-Awas was developed by NIC (National Informatics Centre). e-Awas, the application of online allotment will support this App.
ii. 61,317 residential accommodations of various types are available in Delhi which are allotted to the eligible Central Government employees through Automated System of Allotment (ASA), by using login Id and password.
iii. This app will enable applicants of the Central Government accommodation in Delhi and people in waiting list, to apply for allotment.
iv. Users can also view waiting list and allotment lists. The app is user friendly. It can be downloaded and used in an android mobile phone. It can be downloaded for free from the website of GPRA: https://gpra.nic.in
v. This will be extended to applicants of 8 other cities where ASA is in operation for the purpose of registration and filling of DE-II form.
About National Informatics Centre (NIC):
♦ Headquarters – New Delhi
♦ Director General – Neeta Verma

Giant Mosquito Found In China
Chinese entomologists have discovered a giant mosquito belonging to Holorusia Mikado species, with a wing size of 11.15 cm in Sichuan province of China.
Giant Mosquito Found In China:
i. The giant mosquito belongs to the world’s largest mosquito species Holorusia Mikado. It was found in August 2017 during a field trip to Mount Qingcheng in Chengdu.
ii. It was first found in Japan and was named by British entomologist John Obadiah Westwood in 1876. The Holorusia mikado species generally has a wing size of nearly 8 cm.
iii. These mosquitoes do not feed on blood. They feed mainly on nectar. The adults have a life span of a few days.
iv. Holorusia mikado also known as the crane fly are mainly found in the Chengdu plain of the western parts of Sichuan.
Nick names of some Indian cities:
♦ Auroville (Pondicherry) – City of Dawn
♦ Jamshedpur (Jharkhand) – Steel city, Pittsburg of India
♦ Dhanbad (Jharkhand) – Coal Capital of India 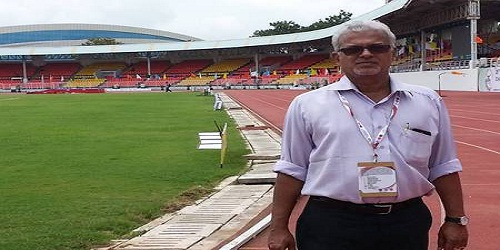 Death of Tony Daniel:
i. Tony Daniel was 66 years old. He was born in Ernakulam, Kerala. He represented Kerala State and University at the national championships in junior and senior categories between 1968 and 1972.
ii. He was the State Sprint Champion in 1970. He was the Secretary of Kerala Athletics Association for eight years.
iii. He was the Deputy Competition Manager during the Commonwealth Games, Delhi 2010 and Competition Director (Athletics) in South Asian Games, Guwahati 2016.
Some dams in Kerala:
♦ Malampuzha Dam – Bharathapuzha River