EAM minister S Jaishankar inaugurated e-Vidyabharti, e-ArogyaBharti for African countries during 55th anniversary of ITEC in New Delhi
On October 7, 2019 the External Affairs Minister(EAM) Shri Subrahmanyam Jaishankar inaugurated e-Vidyabharti (tele-education) and e-ArogyaBharti(Tele-Medicine) projects for all the 54 African countries in New Delhi on the 55th anniversary of Indian Technical and Economic Cooperation(ITEC) which is India’s flagship capacity building programme. These are e-learning platforms to ease the delivery of online education. It will serve as a digital bridge between India and Africa. These will be delivered by Telecommunications Consultants India Ltd (TCIL). 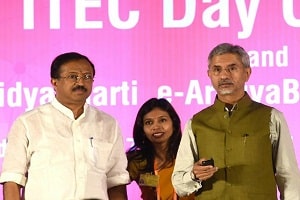 Key points
i. Other initiatives launched: Capacity building initiatives like e-ITEC and ITEC executive were launched to meet the demand for innovative courses for users and professionals.
ii. The projects will enhance access to Indian education and offer medical expertise to African students and doctors respectively.
iii. Members present: Shri Shripad Yesso Naik, Minister of State(MoS) for defence; V.Muraleedharan, MoS for external affairs; Economic Trade secretary TS Tirumurti and other officials were present during the event.
About ITEC:
♦ It is a bilateral assistance programme run by the Indian government. It offers 12,000 scholarships to professionals across fields like Information Technology(IT), Agriculture etc.
♦ Over 200,000 government officials and professionals from 160 partner countries have been trained under ITEC.
♦ Launched- 15 September 1964.

India’s first special Aircraft  to serve Prez, Vice Prez, & PM will arrive by June 2020
India’s first dedicated two long-haul special Boeing 777-300ER aircraft equipped with missile defence systems that will serve Prime Minister Narendra Modi, President Ram Nath Kovind and Vice President Venkaiah Naidu is likely to reach New Delhi, India by June 2020. As per the proposal, It will be kept under control by Indian Airforce (IAF) rather than Air India. If IAF got the charge of plane then the name also changes from Air India One to Air Force One.
Key points:
i. The aircraft equipped with Special Protection Suite that can jam enemy radar frequencies, divert heat-seeking missiles and intercept advanced intermediate range missile systems without intervention by the crew.
ii. An agreement of about US $ 190 million has been made to deploy anti-missile technology in the new aircraft. About Boeing : Founded :July 15,1916 Headquarters : Chicago, U.S.

Environment ministry approves Rs 1,400 crore airport project in Kutch, Gujarat
On October 7, 2019, the union environment ministry has given its approval for developing a commercial airport in Kutch, Gujarat worth 1,400 crores. This proposed project which is expected to be commissioned in 2021-22, is to be developed by Mundra International Airport Pvt Ltd, Gujarat. As a part of the project, the existing airstrip in Mundra will be developed into a full-fledged commercial airport serving Boeing 747-400 category aircraft.
Key points
i. An aerospace manufacturing facility will also be part of the project. The project developers were asked to obtain clearance from the Directorate General of Civil Aviation (DGCA) and the Airports Authority of India (AAI) for safety and project facilities.
About Gujarat:
♦ Capital- Gandhinagar.
♦ Chief minister- Vijay Rupani
♦ Governor- Acharya Devvrat.

MSDE along with IIM Bangalore to launch  Mahatma Gandhi National Fellowship (MGNF)
On October 9, 2019, The Ministry of Skill Development and Entrepreneurship (MSDE) in partnership with the Indian Institute of Management- Bangalore (IIMB) will launch a new 2-year program called ‘Mahatma Gandhi National Fellowship’ (MGNF). It will be delivered by IIMB’s Centre of Public Policy (CPP).
Key Points:
i. Objective: To identify and train a group of young, committed and dynamic individuals.
ii. Coverage: It will be launched on a pilot basis in 6 states namely Gujarat, Karnataka, Meghalaya, Rajasthan, Uttar Pradesh, and Uttarakhand.
iii. Eligibility: Graduates from a recognized university and Indian citizens in the age group of 21-30 years will be eligible to apply.
iv. The MSDE for their skill components would support a total of 75 districts.

India ranks 68th in WEF’s 2019 Global Competitiveness Index, Singapore tops the list
On October 8, 2019 the World Economic Forum(WEF) released its report on 2019 Global Competitiveness Index 4.0. In the index, India was ranked 68th in the list, which is down by 10 places from its previous rank of 58 in 2018. The index was topped by Singapore as the world’s most competitive economy by replacing the United States in second place. 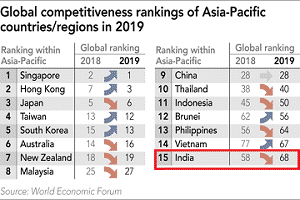 Key points
i. Other reports on India: India is ranked at 15th place in terms of corporate governance, second globally for shareholder governance, and third in terms of the market size. In terms of healthy life expectancy, India is ranked 109th out of total the 141 countries surveyed for the index by WEF.
ii. Other reports: Vietnam is the most improved country in 2019 at rank 67. Asia-Pacific is the most competitive region in the world in 2019.
Ranks:

Bengaluru-based fintech startup Shubh loans receives RBI’s NBFC licence
On October 8, 2019, Shubh Loans, a Bengaluru-based fintech sector start-up, has received a Non-Banking Financial Company (NBFC) license from the Reserve Bank of India (RBI) through its subsidiary ‘Ekagrata ‘of its parent company Datasigns Technologies.
Key points:
i. It has raised series A2 funding of Rs 34 crore (USD 4.8 million) already from Omidyar Network India.
ii. Shubh loans customers will benefit greatly from the new license given by the Reserve Bank. Through the NBFC license, it will be able to provide loans to the deprived areas.
About NBFC:
It is a company registered under the Companies Act, 1956 engaged in the business of loans and advances.It cannot accept demand deposits & do not form part of the payment and settlement system and cannot issue cheques drawn on itself.
About Shubh Loans:
♦ Headquarters: Bengaluru, Karnataka
♦ CEO & Founder: Monish Anand
About RBI:
♦ Headquarters: Mumbai, Maharashtra
♦ Formation: 1 April 1935
♦ Governor: Shaktikanta Das

BSE ties up with FICCI to promote MSME
On October 7, 2019, In order to promote the micro, small and medium industries (MSME) and startups, BSE (Bombay Stock Exchange ) has organized a discussion session in collaboration with FICCI (Federation of Indian Chambers of Commerce and Industry) in New Delhi. The purpose of this session was to identify shortcomings in existing policies and suggest good policies. 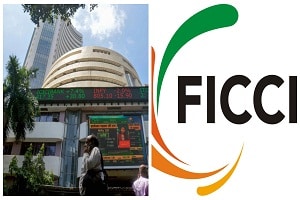 Key points:
i. Apart from this, the session was also organized to promote initiatives like Udyam Saathi and Udyam Sakhi to promote the MSME sector. MSMEs were invited to present their views and suggestions in this session. At the same time, issues related to their concerns were also discussed at the level of the ministry.
ii. About 40 stakeholders, including 20 MSMEs, participated at the event.
About FICCI:
♦ Founded: 1927
♦ Headquarters: New Delhi
♦ President: Sandip Somany
About BSE:
♦ Formation: 1875
♦ Headquarters: Mumbai, Maharashtra
♦ MD and CEO: Ashishkumar Chauhan 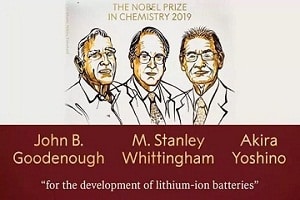 Key points:
i. Akira Yoshino is a Japanese chemist and professor at Meijo University. He is also the inventor of the lithium ion batteries.
ii. John Bannister Goodenough is a German American professor at the University of Texas at Austin, US. He becomes the oldest winner of a Nobel prize. The previous record-holder was Arthur Ashkin, who won the Physics Nobel in 2018 at 96. Goodenough doubled the lithium battery’s potential, creating the right conditions for a vastly more powerful and useful battery.
iii. In addition Michael Stanley Whittingham is a British–American chemist and currently a professor at Binghamton University, New York, US (United States). He eliminates pure lithium from the battery.
About Nobel Prize:
It is a set of annual international awards bestowed for outstanding work in the fields of physics, chemistry, physiology or medicine, literature, economics, and the promotion of peace.
History of Nobel prize in the field of chemistry
♦ A total of 110 awards were given in the field of chemistry from 1901 to 2018. Of these, 181 people were given this award.
♦ Madame Marie Curie became the first scientist to receive two Nobel Prizes (1903 Nobel Prize in Physics and the 1911 Nobel Prize in Chemistry). 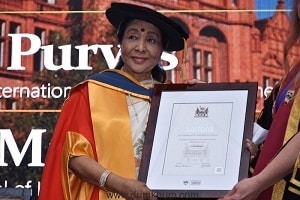 She was awarded a doctorate degree by the Pro-Vice-Chancellor of the University of Salford, Jo Purves, at the award ceremony at the Saint Regis Hotel in Mumbai, Maharashtra.
Key points:
i. Bhosle has earned the distinction of being one of the most famous Bollywood singers in her career that spans seven decades, performing with a variety of smash hits like ‘Parde Mein Rehne Do’, ‘Piya Tu Ab To Aaja’.
ii. She has also made it to the Guinness Book of Records in 2011, has sung in more than 20 languages. She also has been a recipient of the Dadasaheb Phalke Award in 2000 and the Padma Vibhushan in 2008.
iii. In 1997, the British indie rock band Cornershop composed the song ‘A Brim Flower of Hope’ for her contribution to the field of music and her work as a source of inspiration for the British Asian community. 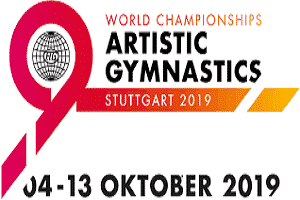 FIFA bans former Salvadorean football association president, Reynaldo Vasquez
On 7 October 2019, The international governing body of association football, FIFA (Fédération Internationale de Football Association) has banned former chief of the Salvadorean Football Association (FESFUT), Reynaldo Vasquez (elected in June 2009) from all football-related activities for life & and imposed 475,000-euro ($522,000 or Rs 3,70,73,871) fine after a corruption investigation. He had breached art. 27 (Bribery and corruption) of the 2019 edition of the FIFA Code of Ethics. 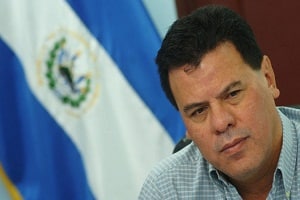 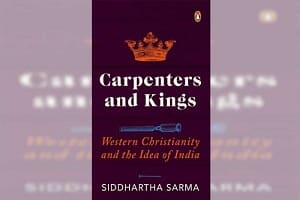 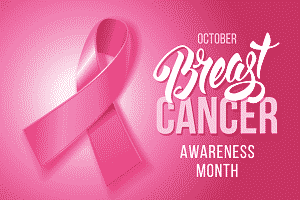 PV Sindhu launched AR app
On October 7, 2019, Indian shuttler PV Sindhu launched the world’s first ‘Life-size Augmented Reality'(AR) technology in the “ABC of breast health” app. It is an initiative of the Ushalakshmi Breast Cancer Foundation, to create awareness and also help in the early detection of breast cancer. The AR feature will be operational in a month in the app.
Key points
i. The World Health Organisation(WHO) promotes breast cancer control programmes. The International Agency for Research on Cancer of the WHO in 2018, estimated 2.1 million new cases of breast cancer and 627 000 deaths from breast cancer globally.
ii. Recently in September 2019, American breast cancer survivor Sarah Thomas became the first person to swim across the English Channel four times non-stop in a 54-hour feat of endurance.
iii. A pink ribbon is an international symbol of breast cancer awareness.
About WHO:
♦ Founded- 7 April 1948
♦ Headquarters- Geneva, Switzerland.
♦ Director General(DG)- TedrosAdhanom.

World Post Day observed on October 9, 2019
World Post Day is observed annually on October 9 by the United Nations(UN) commemorating the anniversary of the establishment of the Universal Postal Union(UPU) in 1874 in Bern, Switzerland. The day was mooted by an Indian, Anand Mohan Narula, during the UPU Congress held in Tokyo, Japan in 1969. It was formed under the resolution (UPU/1969/Res.C.11). 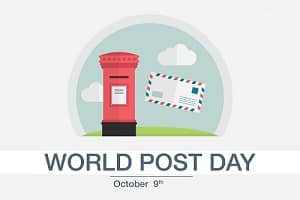 Key points
i. This day is celebrated to create awareness of the day to day role of the postal sector everyone’s life and its contribution to the social and economic development of countries.

Goa government replaces traditional ‘dial 100’’ with new integrated emergency number ‘dial 112’
On October 9, 2019, the government of Goa replaced the traditional ‘dial 100’ with new integrated emergency number ‘dial 112’ for police, fire and medical emergencies with the help of the Union Ministry of Home Affairs (MHA). The new Emergency Response Support System (ERSS) was launched by the Goan Chief Minister Pramod Sawant. Along with the dial number 100 (Police), it also replaced dial number 101(Fire) and 108 (Ambulance Services).
Key Points:
i. In the first phase, the dial ”112” service will cover only police department and in the second phase, fire and medical services will be brought under the new dial number. 2 centres are set up at Panaji and Margao as a part of the new integrated service.
ii.  20 Police Control Room (PCR) vehicles have been fitted with Mobile Data Terminals (MDTs) for immediate dispatch.
iii. To ensure women’s safety, a ‘SHOUT’ feature has been introduced in ‘112 India’ mobile app to seek immediate assistance.
iv. Himachal Pradesh was first state to implement ERSS while Nagaland is the first amongst the North-Eastern States.
About Goa:
♦ National Parks: Bhagwan Mahavir (Mollem) National Park
♦ Wildlife Sanctuaries: Bondla WLS, Chorao Island (Dr.Salim Ali) WLS, Cotigaon WLS, Madei WLS, Bhagwan Mahavir (Mollem) WLS, Netravali WLS