We are here for you to provide the important Current Affairs October 8 2018, which have unique updates of all daily events from all newspapers such as The Hindu, The Economic Times, PIB, Times of India, PTI, Indian Express, Business Standard and all Government official websites. 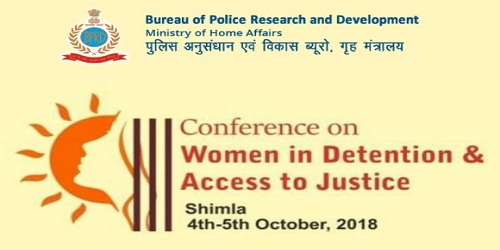 Objective:
To devise strategies and programs for bettering conditions of Women Prisoners and upholding their Fundamental Rights.
Key Points:
i. It was organized by the Bureau of Police Research and Development (BPR&D), Ministry of Home Affairs  in collaboration with Prison Department, Himachal Pradesh.
ii .The 2 days’ Conference had 6 working sessions along with panel discussions on the 06 selected themes. They were:

Maharashtra launches website  and app ‘Maha madat’ to analyze drought situation
On October 6 2018, The Maharashtra Government has launched a website and an application ‘Maha Madat’ for collectively analysing the rainfall, crop situation and underground water level using modern technology.
Objective:
The Website and app will help in accurate analysis of drought-like situation in villages of the state.
Key Points
i.The website has been created by the Relief and Rehabilitation Ministry with the help of the Maharashtra Remote Sensing Application Centre (MRSAC).
ii.The Region is declared as Drought based on the two criteria laid down by the Centre in 2016 they are,

Rs.10000 p.a worth of Free Electricity To Farmers To Increase Their Income: Rajasthan CM
On October 7, 2018, the Rajasthan government launched a scheme aimed to provide free electricity to farmers of the state having electric connections in general category for specific limit.
Objective:
To increase farmer’s income.
Key Points:
i. According to the scheme, more than 12 lakh farmers of the state will receive free electricity up to Rs 10,000 for a year on their agricultural electricity connection.
ii. As per the scheme, upon successful payment of the bill by farmers, a Direct Benefit transfer (DBT) with maximum of Rs. 833 per month would be deposited to the accounts of the farmers.
iii. It will be effective from November 2018.
iv. Power distribution companies in Jaipur, Ajmer and Jodhpur have been given the orders for the same by the Energy Department.
Other News:
i. The state government claims to have infused Rs 40,000 crore for electricity infrastructure development.
ii. Further, Rs 37,000 crore worth “Eastern Rajasthan Canal Project” (ERCP) is on the works for addressing water-related issues of the region.
iii. The project will provide water for drinking and irrigation purposes to 13 districts in eastern Rajasthan.
Rajasthan:
♦  Capital: Jaipur.
♦  Chief minister: Vasundhara Raje.
♦  Governor: Kalyan Singh.
♦  National Parks: Ranthambore National Park, Sariska National Park, Keoladeo National Park, Kumbhalgarh Wildlife Sanctuary.

Karnataka govt unveils ‘Unnati’ scheme to help entrepreneurs
On October 6 2018, Karnataka state government,unveils the Unnati scheme,which will invest up to Rs 20 crore to create end-to-end support infrastructure for startups and entrepreneurs from a marginalised background.
Objective:
The Objective is to deliver sustainable development and social welfare which will identify, mentor, and promote young entrepreneurs from the SC/ST communities.
KeyPoints:
i.The government, under the scheme, will identify the problems dogging society and solve them by identifying companies, working on products and solutions for related problems.
ii. Karnataka Social Welfare Minister Priyank Kharge said the department will provide up to Rs 50 lakhto winning entrepreneurs to develop tech-based solutions that are innovative, novel and have meaningful social impact.
About Karnataka:
♦ Chief Minister:H.D.Kumaraswamy
♦ Governor:Vajubhai Rudabhai Vala
Some of the Airports in Karnataka:
♦ Kempegowda International Airport
♦ Mangalore International Airport.

The directions are thus called: ‘The Electronic Trading Platforms (Reserve Bank) Directions, 2018’.
i. As per the norms, ETPs will strictly mean any electronic platform except the stock exchange, where transactions of eligible instruments would take place.
ii. Also for an entity to operate as an ETP, it has to obtain the permission of the RBI beforehand.
iii. Furthermore, an entity seeking authorisation as an ETP operator should possess and maintain a minimum net-worth of Rs 5 crore at all times.
iv. These come into force with effect from October 05, 2018.
Background:
This was included as per the 4th Bi-Monthly Monetary Policy Statement for 2017-18 dated October 4, 2018.
RBI:
♦  Founded: 1st April 1935.
♦  Headquarters: Mumbai.
♦  24th Governor: Dr. Urjit Patel.

iii. This would form a part of government of India’s target of 175 GW of renewable energy capacity by 2022.
iv. This green loan is an Indian rupee loan under track III of the Reserve Bank of India’s guidelines for external commercial borrowings.
Background:
The government plans to increase the country’s renewable energy capacity to 175 GW, comprising solar, wind, biomass, and small hydro, by 2022.
Adiya Birla Finance:
♦  It is a NBFC of the Aditya Birla Capital group.
♦  CEO of Aditya Birla Capital: Ajay Srinivasan.

Instant vehicle insurance renewal launched by HDFC Bank
On October 5, 2018, HDFC bank announced the launch of instant vehicle insurance renewal.
i. The renewal can be done through the help of payment options such as SMS, Mobile Banking app, NetBanking, ATM, and PayZapp.
ii. Provision of EMI is also available for the same through SMS, Netbanking or PayZapp.
iii. As the insurance is valid for 1 year, the online option of instant renewal is effective.
HDFC:
♦ Headquarters: Mumbai.
♦ CEO: Aditya Puri.
♦ Tagline: We Understand your world.
♦ Founded: August 1994. Key Points:
i. Benaud, a former Australia captain who became one of the most loved voices of cricket after his playing days.
ii. He will be the 40th Legend of Australian Sport and the third cricketer to be bestowed the prestigious annual honour.
iii. It will be made official at the 34th Sport Australia Hall of Fame induction and awards gala dinner in Melbourne on 11 October.
Two Other cricketers who had been inducted as ‘Legends’ are:
♦ Don Bradman (1993)
♦ Keith Miller (2004)