ii.Trade and defence cooperation MOU worth $10 billion was signed between the countries.

India and Russia signed their biggest defence deal in over two decades for Five S-400 air defence systems with worth $5.43 billion ( Rs. 40,300 crore), surface-to-air missile systems but they have to deal with the challenge of transferring the $5.43 billion for the contract in the face of financial sanctions by the US. 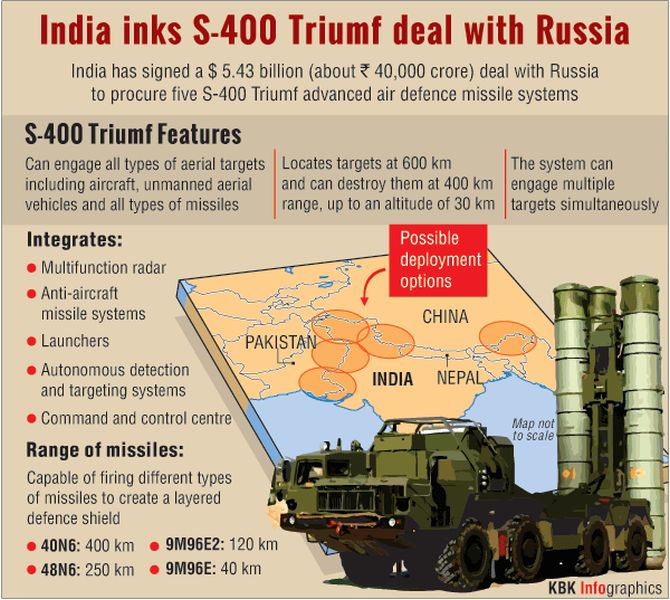 8 MoUs/Agreements Exchanged between India and Russia:

Memorandum of Cooperation (MoC) was signed between the Ministry of Railways of the Republic of India and the Joint Stock Company ‘Russian Railways’ for the following:

MOU was signed between Ministry of Railways and Ministry of Transport of Russian Federation for development of cooperation in transport education.

Other Key Points in Summit:

i.The 2 countries have also set a target of achieving $30 billion bilateral trade by 2025.
ii.India-Russia trade rises 20 per cent in 2017-18
iii.India and Russia discussed increasing mutual investments up to $15 billion to grow by 21%.
iv.India and Russia called for the development of the International North-South Transport Corridor (INSTC).
v.India is also planning on acquiring 4 Krivak-class frigates from Russia, two of which will be built in India, which will be a $2.5 billion deal.
vi.An inter-governmental agreement to manufacture AK-103 assault rifles in India also did not come end in this summit.
vii.India announced establishing ‘Russia Plus’ to facilitate the entry of Russian firms into India.
viii.India to set up fast track, single-window mechanism for Russian investments
ix.India invited Russia to set up a dedicated defence industrial park in India.
x.Putin invites Modi to 2019 Vladivostok Economic Forum in Vladivostok on September 2019.
xi.Indra 2018, joint India-Russia counter-terrorism exercise, to be held in UP in November
xii.Kudankulam nuclear power plant in Tamil Nadu–the fourth and fifth units of the plant are being constructed and the fourth and fifth will be constructed next. According to India’s agreement with Russia, 12 units will be built in the next 20 years.