PMJAY in first year funded 90,000 cancer claims; Tamil Nadu tops the list
The Union Health Ministry’s data showed that in its first year of the launch of the Pradhan Mantri Jan Arogya Yojana (PMJAY), the treatment of 90,000 cancer patients was funded through 1.8 lakh hospital admissions. Tamil Nadu emerged as the top state where the most cancer patients availed treatment under PMJAY with 40,056 cases. It was followed by Kerala (22,000), Madhya Pradesh (19,455), Chhattisgarh (15,997) and Gujarat (14,380).
Key Points:
i. The National Health Authority (NHA), the nodal agency for implementation of PMJAY has sanctioned Rs 321 crores for cancer care so far.
ii. Every year there are 11.57 lakh new cancer patients in India and 7.84 lakh cancer deaths.
iii. There is a rise in cancer claims from 906 claims in September 2018 to 87,832 in September 2019.
About PMJAY:
Ayushman Bharat (AB) Yojana or Pradhan Mantri Jan Arogya Yojana (PMJAY) or National Health Protection Scheme (NHPS) is a centrally sponsored scheme launched on 23 September 2018, under the Ayushman Bharat Mission of Ministry of Health and Family Welfare (MoHFW) in India. The scheme aims at making interventions in primary, secondary and tertiary care systems, covering both preventive and promotive health, to address healthcare holistically.

5th World Parliament of science, religion and philosophy 2019 held in Pune, Maharashtra
A 3-day event of 5th World Parliament of Science, Religion and Philosophy 2019 with the theme of ‘Role of Science, Religion and Philosophy for World Peace and well-being of Mankind’ organised by MIT (Maharashtra Institute of Technology) World Peace University in association with World Peace Centre, Alandi, MAEER’s MIT Group of institutions and MIT ADT University ,was held at the world’s largest dome philosopher Saint Dnyaneshwara World Peace Prayer Hall, Loni Kalbhor in Pune, Maharashtra from October 2-4, 2019. The primary objective of the event was to create and promote interfaith and inter-religious movement for World Peace. 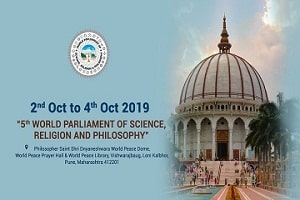 Key points:
i. The 3-day event also witnessed award presenting ceremony. The list of Awardees are as follows, 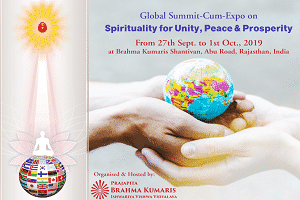 Key Points:
i. It will be formed in compliance with the Solid Waste Management Rules, 2016.
ii. The electronic waste will be collected door-to-door or can be deposited directly at the clinic in exchange for a fee.
iii. Initially, it will be launched as a three-month pilot project and would be implemented in India, if successful.

India’s 1st plant to produce diesel from plastic waste opened in Mathura, Uttar Pradesh
On October 4, 2019, India’s 1st plant to produce diesel from plastic waste in Mathura district of Uttar Pradesh has been soft-launched by Mathura MP (Member of Parliament) Hema Malini with the aim to fulfill Prime Minister(PM) Narendra Modi’s dream of a Swachh Bharat Mission.
Key points:
i. The plant, working on a full scale at the Mathura Municipal Corporation (MMC), built on a public-private partnership (P-P-P) model  for which the MMC has signed a contract of Rs 9.5 crore with Paterson Energy Private Limited, Chennai, Tamil Nadu.
ii. The specialty of this plant will be that 6 tons of plastic will be used to make diesel every day.
About Swachh Bharat Mission:
It was launched on 2nd October 2014 by Prime Minister of India, Shri Narendra Modi to achieve universal sanitation coverage and to put the focus on sanitation. It consists of two sub-missions Swachh Bharat Mission (Gramin)-(SBM-G) and Swachh Bharat Mission (Urban).
About Uttar Pradesh:
Capital: Lucknow
Chief minister: Yogi Adityanath
Governor: Anandiben Patel

50th IFFI for 2019 to be held in Goa
Information and Broadcasting Minister Mr. Prakash Javadekar notified that the 50th, the Golden Jubilee edition of the International Film Festival of India (IFFI) 2019 will be held in Goa from November 20-28, 2019 with Russia as the partner country. For the first time, films with audio deion will be screened for the visually impaired. 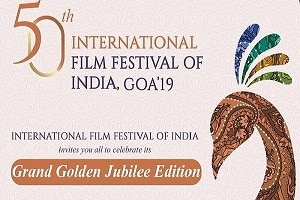 Key Points:
i. More than 200 best films from 76 countries, 26 feature films and 15 non-feature films in the Indian Panorama section will be screened. 12 prominent films in different languages which have completed 50 years in 2019, will also be showcased.
ii. The Dadasaheb Phalke Award 2019 winner Amitabh Bachchan who has made an outstanding contribution to the cinema will be honoured on the occasion.
iii .Indian Panorama, a flagship section of IFFI has selected Gujarati period drama “Hellaro” directed by Abhishek Shan as the opening film of feature section and “Nooreh”, a Kashmiri language tale directed by Ashish Pandey, as the opening non-feature film.
iv. The feature film jury was headed by filmmaker and screenwriter Priyadarshan and the non-feature jury was headed by documentary filmmaker Rajendra Janglay.

20th annual national conference Medrecon 2020 to be held in Kochi, Kerala
The 20th annual national conference on health informatics Medrecon 2020 will be held in Kochi, Kerala on February 7- 8, 2020 under the theme ‘Value of Data in Health Care Ecosystem’. It will be jointly organised by the Health Informatics and Information Management Association (HIIMA), Kerala, and the Health Records Association of India (HERAI).
i. Over 700 delegates from the healthcare sector in India and abroad will participate in the event.
ii. Lorraine Fernandes, president of the International Federation of Health Information Management Associations (IFHIMA) in the US will be the keynote speaker. 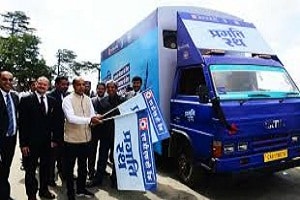 Key points:
i. The Pragati Rath is undertaken by a special van, which is equipped with LED (light-emitting diode) and through this, customers will be made aware of digital banking.
ii. On this occasion, HDFC Bank presented a check of one crore rupees for the Chief Minister’s Relief Fund, which will provide relief to poor and needy people.
iii. The HDFC bank will adopt of 15 villages in the state under the Holistic Rural Development Program and will introduce Sustainable Livelihoods Initiative Scheme in the state.
iv. The bank will support the ongoing campaign against drug addiction in the state and assured to participate in waste management as well. It has 67 branches and 107 ATMs(Automated Teller Machine) for the convenience of consumers in HP.
About HDFC:
Founded: August 1994
Headquarters :Mumbai, Maharashtra
Managing Director: Aditya Puri
Tagline: We Understand Your World
About Himachal Pradesh:
Capital: Shimla
Governor: Bandaru Dattatreya 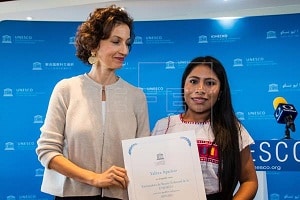 Key points:
i. The 25-year-old actress made history as the first indigenous performer nominated for a best actress honor at the Academy Awards this year for her performance in the film “Roma”. She will promote initiatives that claim indigenous peoples rights and that promote greater social awareness on the subject.
ii. In addition, She will help the UNESCO by preserving their cultural heritage and environment knowledge and fighting for equal access to education.
iii. Goodwill ambassadors are people who have an international projection talent in different fields. They are recognized for their integrity and for expressing their intention to help raise public opinion on issues related to UNESCO’s mission.
About UNESCO:
Formation :4 November 1945
Headquarters :Paris, France
Director-General:  Audrey Azoulay 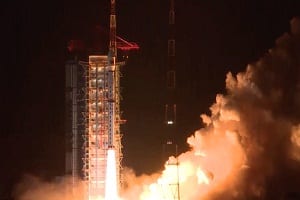 Key points:
i. The satellite has successfully entered the planned orbit & will start receiving pictures and other data  with a resolution of less than a metre.
ii. This Gaofen-10 satellite can be used in land survey, urban planning, road network design, crop yield estimation as well as disaster relief. The images from this satellite will also help in developing greenery and formulate major national strategies such as multi-billion dollar Belt and Road Initiative (BRI).
iii. It was the 314th flight mission of the Long March carrier rocket series.
About China:
Capital: Beijing
Currency: Renminbi
President: Xi Jinping 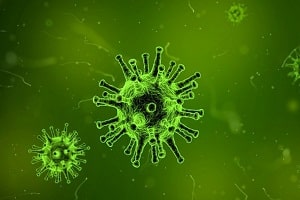 Key Points:
i. It provided a detailed view of mechanism with which the particles self – assembled to form a parasite which may help to find new treatment approaches for viral diseases.
ii. The viruses when formed were of 30 nanometers in diameter and had one piece of RNA (Ribo – Nucleic Acid) about 180 identical proteins.
iii. The proteins arranged themselves into hexagons and pentagons to form a soccer-ball-like enveloping structure around the RNA. This formation is called capsid.
iv. The technique called Interferometric Scattering Microscopy (iSCAT) was used to capture the formation process. Under the technique, the light scattered by an object created a dark spot in a larger field of light.
v. The researchers studied an RNA virus that infected the bacterium Escherichia coli (E coli) which is commonly found in the lower intestine of warm-blooded organisms (endotherms). 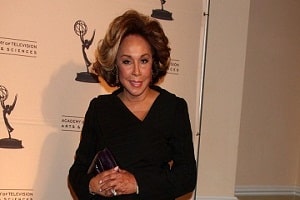 i. Born on 17 July 1935, The Bronx, New York, United States, Carroll was the recipient of Golden Globe Award for Best Actress in A Television Series in 1968.
ii. She was also the first black woman to win the Tony Award for best actress for her role in the Broadway musical No Strings.
iii. Nominated for an Oscar for best actress in 1975 for Claudine, Carroll was modelling by the age of 15 years and was reportedly the model for one of the first black Barbie dolls.

Wildlife week celebrated all over the country from 2 – 8 October, 2019
The Wildlife Week is being celebrated all over India from 2nd -8th October 2019 with the aim of protecting Indian wildlife species from extinction. The theme for the year 2019 is “Life Below Water: For People And Planet” which aimed at preservation of underwater fauna and flora. 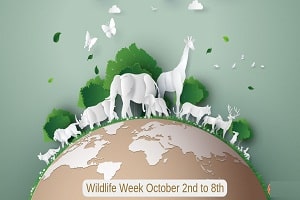 Key points:
i. The Wildlife week , organized by National Board of Wildlife since its establishment in 1972, was first celebrated in the year 1972.
ii. Throughout the week various activities are organized by the Central and State Governments, environmentalists, activists, etc. to accelerate the awareness of conservation of wildlife among the people & encourage them save large number of animals by not killing them for food and other purposes.
iii. A lot of seminars , processions to manifest the responsibility of protection of flora and fauna, Bird watch event Bengaluru-Jakkur Lake at Bangalore & at Yamuna River Front, Delhi are scheduled during the celebration.

Centre approves to set up Tripura’s first SEZ at Sabroom
On October 5, 2019, The Department of Commerce, Ministry of Commerce and Industry, Government of India (GoI) has given its approval for setting up of Tripura’s first-ever Special Economic Zone (SEZ) by Tripura Industrial Development Corporation Limited (TIDC) at Paschim Jalefa village in Sabroom with an estimated investment around Rs 1550 Crore.
Key points:
i. Rubber-based industries like tyres, surgical threads, textile and apparel industries, bamboo industries, agri-based processing units are the industries expected to be set up at the SEZ.
ii. After the set up,  duty free import/domestic procurement of goods for development, operation and maintenance of SEZ units , 100 % Income Tax exemption would be provided on export income for SEZ units under Section 10 AA of the Income Tax Act for the first 5 years.In addition, 50 % exemption would be offered for the next 5 years and 50 % of the ploughed back export profit for another 5 years.
About Tripura:
Capital: Agartala
Chief minister: Biplab Kumar Deb
Governor: Ramesh Bais
National Parks: Clouded Leopard National Park ,Rajbari National Park.

Punjab govt has appointed retired justice Vinod kumar sharma as its lokpal
The Punjab government has appointed retired Justice Vinod Kumar Sharma as Lokpal. He succeeds Justice Satish Kumar Mittal, who resigned from the post in April 2018 and became the chairman of Haryana Human Rights Commission. He succeeds Satish Kumar Mittal.
Key points:
i.  In 2010, Sharma moved to the Madras High Court after served as Punjab and Haryana high court judge from March 22, 2006 to October 26, 2010. He retired as a judge of Madras High Court in May 2013.
ii. The Punjab government had earlier in July 2018 sent the name of Justice Mahatab Singh Gill to the High Court but the case has been hanging for a long time & Gill’s name was sent back by the High Court.
About Lokpal:
A Lokpal is an anti-corruption authority or body of ombudsman who represents the public interest in the Republic of India. The current Chairperson of Lokpal is Pinaki Chandra Ghose.
About Punjab:
Capital: Chandigarh
Governor: V.P. Singh Badnore
Chief minister: Amarinder Singh