The Goa Maritime Conclave (GMC) 2019 was held at Hotel Taj Fort Aguada in Goa under the theme “Common Maritime Priorities in IOR and need for Regional Maritime Strategy” from October 3-5, 2019. It was inaugurated by the National Security Advisor (NSA) Mr Ajit Kumar Doval and organized by Naval War College (NWC), Goa. It was hosted by Admiral Karambir Singh, PVSM, AVSM, ADC, the Chief of the Naval Staff. 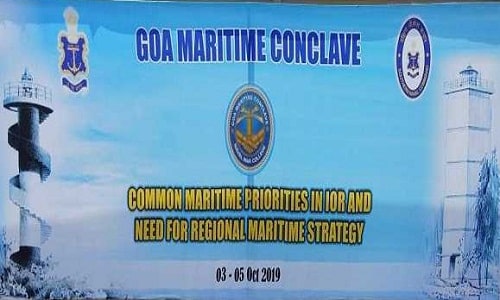 Key Points:
i. Sub-themes: The 3 sub themes of the conference were “Opportunities and Challenges in IOR”; “Imperatives and Priorities for Forging a Common Agenda in the IOR”and “Regional Constructs and Strategies in the IOR”.
ii. The deliberations were focused on capacity building among IOR (Indian Ocean Region) Navies to tackle emerging maritime threats,
iii. The 31st edition of the Naval War College Journal was released on the occasion.
iv. Various bilateral meetings were held between the Chiefs of Navies on the side-lines of the conclave.
v. Other members: Chiefs of Navies and senior representatives from 10 Indian Ocean littoral countries which included Indonesia, Malaysia, Singapore and Thailand from South East Asia, Bangladesh, Myanmar and Sri-Lanka from India’s immediate neighbourhood and the islands of Seychelles, Maldives and Mauritius.

About Indian Navy:
♦ Motto: Sham No Varunah (May the Lord of the water be auspicious unto us)
♦ Navy Day: 4th December