We are here for you to provide the important Current Affairs October 6 2018, which have unique updates of all daily events from all newspapers such as The Hindu, The Economic Times, PIB, Times of India, India Today, Indian Express, Business Standard, all Government official websites. 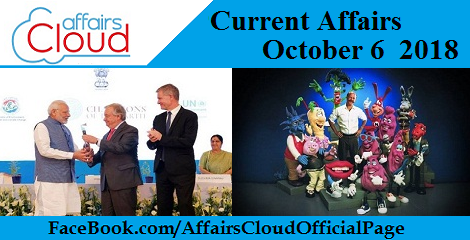 First assembly of ISA, Second ministerial of IORA and Second REINVEST meet to be held in India
i. On October 2, 2018, the Prime Minister, Mr. Narendra Modi, inaugurated the first 3-day Assembly of the International Solar Alliance at Vigyan Bhawan in New Delhi.It was co-chaired by French Minister Brune Poirson. Key Points:
i. IndiaSkills 2018 was organized by the Ministry of Skill Development and Entrepreneurship. It aimed to identify, promote and reward the best talents in different skills.
ii. 450 participants took part in the competitions. 46 competition trades and 10 demonstration trades participated.
iii. Winners were awarded by Minister of State for Skill Development and Entrepreneurship Anantkumar Hegde and Subhash Ghai, Chairman of Media and Entertainment Skills Council and India Film Director.
iv. Some winners will be given more training and will be sent to represent India at the 45th WorldSkills Competition at Kazan, Russia in 2019.
v. Persons with disabilities also participated. These winners will participate at the World level competition in Abilympics in China.
Some museums in Delhi:
♦  Indian Air Force Museum, Palam
♦  Indian War Memorial Museum
♦  Red Fort Archaeological Museum i.The theme of this year’s festival is Science for Transformation.
ii.  This Festival aims to apply science and technology for transformation of the country and enable positive change for social and economic progress.
iii. It features 23 special events, and is being attended by about 10000 delegates.
iv. A “science village” was set up at National Botanical Garden in Lucknow for interaction of science with common people.
Other News:
i. Apart from this, Science and Technology Minister Dr Harsh Vardhan inaugurated Young Scientists Conference, Mega Science, Technology & Industry Expo and Global Indian Science & Technology Stakeholders’ Meet (GIST).
ii. It would provide a platform to young scientists, entrepreneurs and researchers to present their innovative ideas.
iii. Some of them were:

Key Points:
i. The conference was organised by the Federation of Obstetric and Gynaecological Societies of India and the Kanpur Obstetric and Gynaecological Society.
ii. Theme of the conference was: “Give her wings and let her soar.” President Ram Nath Kovind addressed the conference.
iii. He also addressed a seminar organised by the Talent Development Council, Kanpur. He unveiled a statue of the late freedom fighter Shyamlal Parshad in Kanpur.
Some wildlife sanctuaries in Uttar Pradesh:
♦  Kachhua Sanctuary
♦  Katarniaghat Wildlife Sanctuary
♦  Kaimoor Wildlife Sanctuary

RBI approved formation of ‘Kerala Bank’ having Rs 650 bn in deposits
On October 3, 2018, RBI approved the proposal of Kerala government for the formation of Kerala Bank.
i. The decision was taken by special task force headed by Chairman M S Sriram.
ii. The bank will be formed by consolidating State Cooperative Bank and the 14 district cooperatives.
iii. It will have a net deposit amount of Rs 650 billion.
iv. It will provide modern facilities to the Primary Agricultural Cooperative Societies (PACS).
v. The unification will be completed by March 2019.

First Abu Dhabi Bank & ToneTag tie up for sound based payments
On October 6, 2018, First Abu Dhabi Bank and Sound-based payment services provider ToneTag announced their tie up for implementing sound based contactless payments.
i. This will allow the customers to pay using sound through the PayIt app and make cardless and cashless payments through their mobile phones.
ii. It will offer sound wave-based proximity payment solutions to their clients across all seven Emirates of UAE.
Background:
The company has deployed its retailPOD in the Middle East, South East Asia, North America and parts of Africa.
Tone Tag:
♦  CEO: Kumar Abhishek.
♦  Headquarters: Bengaluru. Key Points:
i. Srinivasan Swamy replaces Felix Tataru. He is the first Indian to hold the chairman and world president post of IAA.
ii. In his new role, he will lead a team of 25 Executive Committee members from various countries. Also, India will host the 44thedition of ‘IAA World Congress’, in Cochin in 2019.
iii. He is the chairman of RK Swamy Hansa Group. He has received Global Champion award by the IAA and was inducted into the IAA India Chapter Hall of Fame in 2017.
iv. He is also Vice Chairman of Asian Federation of Advertising Associations. He had served in key positions in Advertising Agencies Association of India (AAAI), Advertising Standards Council of India and as board member of Audit Bureau of Circulations. 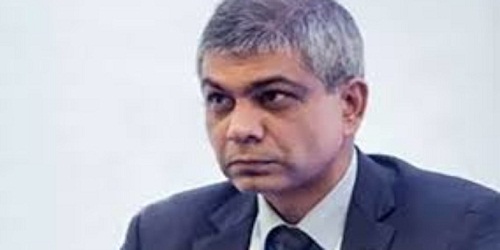 36th National Games in March-April 2019 in Goa
The 36th National Games will be held from March 30 to April 14, 2019 in Goa.
i. This announcement was made by Sports Authority of Goa (SAG) Executive Director V M Prabhudesai in Panaji. The Opening and Closing ceremonies will be held at PJN Stadium, Fatorda.
ii. Shooting and cycling events will be held in New Delhi since Goa does not have the facilities for these sports.
iii. Five sports: Rugby, Wushu, Modern Penthatlon, Lawn Bowl, and Billiards and Snooker, will be added to the Games programme.Expected budget of the Event is Rs.400 Crore. i. He was 70 years old. He received Oscar award for the animated short film ‘Closed Mondays’ (1975). He was also the founder of Will Vinton studios.

i. The book has been published by Pan Macmillan India. It will be available in bookstores from October 22, 2018. The books speaks about different phases of a woman’s life.
ii. Sudha Menon has also written the following books: Leading Ladies: Women Who Inspire India, and Devi, Diva or She-Devil: The smart career woman’s survival guide.