We are here for you to provide the important Current Affairs October 21 2018, which have unique updates of all daily events from all newspapers such as The Hindu, The Economic Times, PIB, Times of India, PTI, Indian Express, Business Standard and all Government official websites. Mandatory R&D funding by companies: Prime Minister’s panel Science Technology and Innovation Advisory Council (PM-STIAC)
On October 20, 2018, the Prime Minister’s Science Technology and Innovation Advisory Council (PM-STIAC) announced its order to make it mandatory for medium and large enterprises in key sectors to set aside funds for research and development.
i.The high-level panel wants the private sector to have a share of at least 1% of GDP by 2022.
ii.The committee wants India to achieve the global average of 1.5% of GDP, over the next 5 years.
iii.This decision was taken after the Economic Survey pointed out that not enough investment in this sector is being given.
iv.It had said that R&D investment in India has been stagnant for 20 years at 0.6-0.7% of gross domestic product with that by the private sector at 0.35%
v.An Advanced Mission Mode Innovation and Research (ADMIRE) is proposed to be launched by line ministries to provide direct R&D grants to industry on a 50-50 model through competitive bidding.
Suggestions of the Council:
i.Ministries have been mandated to allocate at least 2% of their budgets as research and innovation grants related to priority concerns.
ii.It proposed a 100% tax holiday for patented products emerging out of R&D for the first five years of commercialization.

i. This will be built along the Bilaspur-Manali-Leh line close to the Sino-India border.
ii. The station will be at a height of around 3,000 metres and will be inside a 27-km-long tunnel.
iii. It will connect all important locations between Bilaspur and Leh like Sundernagar, Mandi, Manali, Keylong, Koksar, Darcha, Upshi and Karu and other towns of Himachal Pradesh and Jammu and Kashmir.
iv. After completion, the line will halve the duration taken to cover the distance between Delhi and Leh, from 40 hours to 20 hours.
Background:
Keylong is the administrative centre of Lahaul and Spiti district, 26 km north of Manali and 120 km from the Indo-Tibetan border.
Himachal Pradesh:
♦ Capital: Shimla.
♦ Chief Minister: Jai Ram Thakur.
♦ Governor: Acharya  Devvrat.
♦ National Parks: Great Himalayan National Park, Pin Valley National Park. 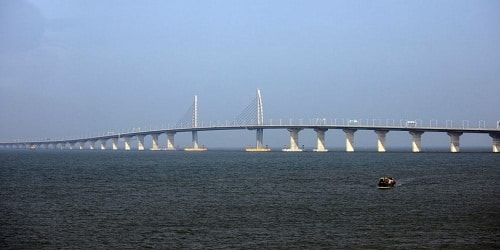 Key Points:
i. The bridge is 55 kilometers long. It is situated in the Lingdingyang waters of the Pearl River Estuary.
ii. The construction of this bridge started in December 2009. It will reduce travel time between Hong Kong and Zhuhai, in China, from 3 hours to 30 minutes.
iii. It will also integrate the cities in the Pearl River Delta. The number of permits for cross-border private cars through the bridge has been fixed at 5,000.
iv. A government-commissioned study from 2016 estimated that 29,100 vehicles would use this bridge daily by 2030.
About Hong Kong:
♦ Special Administrative Region of the People’s Republic of China
♦ Official languages – Chinese, English
♦ Currency – Hong Kong dollar

US merges its embassy and Consulate General in Jerusalem into single diplomatic mission
On 18th October 2018, United States Secretary of State Michael R. Pompeo announced that the US Embassy and US Consulate General in Jerusalem, Israel, are merged into a single diplomatic mission.
Key Points:
i. The new unit will remain in its current location. But it will not be autonomous in its affairs.
ii. This announcement has been made over 5 months after the inauguration of the US Embassy to Israel in Jerusalem.
iii. The US Ambassador to Israel, David Friedman, will guide the merger. Also, a new Palestinian Affairs Unit will be stationed inside the US Embassy Jerusalem.
iv. Through this unit reporting, outreach, and programming in the West Bank, Gaza and with Palestinians in Jerusalem will be conducted.
About Israel:
♦ Capital – Jerusalem
♦ Currency – New shekel
♦ Official language – Hebrew
♦ President – Reuven Rivlin
♦ Prime Minister – Benjamin Netanyahu Key Points:
i. The meeting was organised with the assistance of: Government of Kazakhstan, Ministry of Education and Science of Kazakhstan, Ministry of Foreign Affairs of Kazakhstan and Rector’s Office of the University of the Shanghai Cooperation Organisation, (USCO) and the main (basic) universities of Kazakhstan, affiliated with USCO.
ii. Minister of Education and Science of Kazakhstan Yerlan Sagadiyev chaired the event.
iii. Measures to implement the 15 June 2006 agreement on cooperation in education between the governments of SCO member states throughout 2019 and 2020 was approved.
iv. Implementation of the agreement between the governments of SCO member states on establishing and operating USCO was approved.
v. SCO Secretary-General’s initiative to establish the SCO Youth League at the SCO Secretariat in Beijing was approved.
vi. It was agreed to conduct the 8th meeting of education ministers of SCO member states in the Russian Federation during the Russian Federation’s presidency of SCO.
vii. Dr. Satya Pal Singh, Minister of State for Human Resource Development, participated on behalf of Government of India.
About Shanghai Cooperation Organisation (SCO):
♦ Secretary General – Rashid Alimov
♦ Headquarters – Beijing, China

International Finance Corporation launched $1-billion masala bonds
On October 20, 2018, to help Indian government boost capital flows into the country, IFC, a member of the World Bank Group, launched a $1 billion masala bond programme.
i. The Reserve Bank of India (RBI) also permitted banks to issue masala bonds overseas for their capital requirements and to finance infrastructure and affordable housing.
ii. The first tranche of $100 million of IFC’s masala bond programme was offered to a range of investors, including asset managers, banks, and a pension fund, in the United States and Europe at the London Stock Exchange.
About IFC:
♦ Headquarters: Washington D.C., US.
♦ Founded: 20 July 1956.
♦ Member Countries: 184 countries 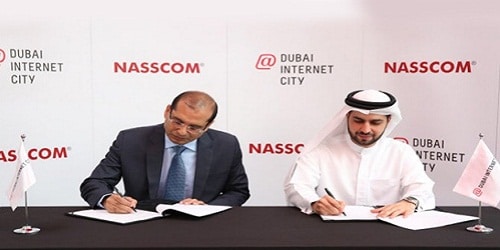 Key Points:
i.  The MoU between NASSCOM and the Dubai Internet City DIC is the first of its kind in the MENA region.
ii. The MoU was signed by Ammar al-Malik, Managing Director of DIC and Dubai Outsource City (DOC) and Kamal Agarwala, SME Council Chair, NASSCOM.
iii. As per the MoU, DIC will give NASSCOM’s, small and medium-sized enterprises (SME) members opportunity to develop their operations by offering support and a platform to expand in the MENA region.
iv. DIC already houses Indian companies like Tata Consultancy Services, Tech Mahindra, Wipro, and the HCL Technologies.
About National Association of Software and Services Companies (NASSCOM):
♦ President – Debjani Ghosh
♦ Chairman – Rishad Premji
♦ Headquarters – Noida, Uttar Pradesh 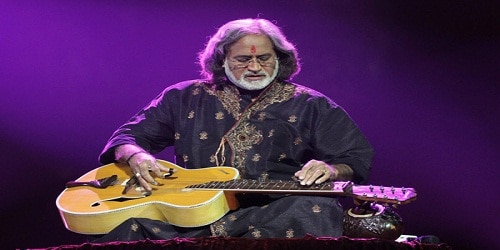 i. The award will be given at the two-day Indian classical music festival scheduled to be held on October 21-22, 2018 and organized by Sursagar Society of Dilli Gharana.
ii. Mr. Bhatt is known for his Grammy award winning album “A Meeting by the River” with Ry Cooder. 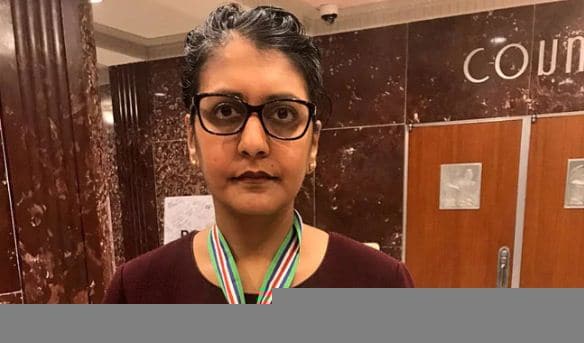 i.  She received the award from US Secretary of State Mike Pompeo for her extraordinary contribution towards combatting human trafficking inHouston.
ii. She is currently the Special Advisor on Human Trafficking to Houston Mayor Sylvester Turner.
iii. She is a past speaker at the United Nations World Humanitarian Summit.

i. It was developed by the state-owned aircraft firm Aviation Industry Corporation of China.
ii. The aircraft code-named Kunlong was piloted by four crew members.
iii. It took off from the Zhanghe Reservoir and landed on the water in Hubei province’s Jingmen
iv. It is powered by four domestically-built turboprop engines and has a range of 12 hours and can have a high speed of 145 kilometres.
v. It will be mainly used for maritime rescue, fighting forest fires and marine monitoring.
China:
♦ Capital:  Beijing.
♦ Currency: Renminbi.

Feihong-98 (FH-98): China successfully tested World’s Largest Unmanned Transport Drone
On October 17, 2018, China successfully tested the world’s largest unmanned transport drone.
i. It’s name is Feihong-98 (FH-98) and it can carry a payload of 1.5 tonnes.
ii. It was developed and modified by the China Academy of Aerospace Electronics Technology.
iii. It was adapted from the prototype of the Shifei Y5B, a China-developed first fully domestically-built transport aircraft.
iv. FH-98 has a flight height of 4,500 metres, a cruising speed of 180 kilometers per hour, and a maximum range of 1,200 kms.
v. It features simple take-off and landing, simple operation, advanced technology, at an affordable cost.
Other News:
China will sell 48 of its Wing Loong II high-end reconnaissance and multi-role Chinese drones to its all-weather ally Pakistan.

Earliest known flesh-eating fish identified in South Germany
On October 20, 2018, Scientists have unearthed the fossilized remains of a piranha-like species believed to be the earliest known example of a flesh-eating fish.
i. This bony creature, found in South Germany, lived about 150 million years ago.
ii. Martina Kölbl-Ebert, of Jura-Museum Eichstätt led the study.
iii. They found  long pointed teeth on the exterior of a bone forming the roof of the mouth suggesting that the pattern and shape of the teeth, jaw morphology was well-equipped to slice fins and flesh Key Points:
i. Sergio Perez has been with Force India since 2014. He is in 7th position in the 2018 championship standings. He has held the 7th position since 2016.
ii. He has achieved 5 podium finishes in his career. His best finish of this season was a third place at Azerbaijan. He is 28 years old.
About Force India:
♦ Formula One racing team and constructor based in Silverstone, United Kingdom, with an Indian license
♦ Team Principal & CEO – Otmar Szafnauer