We are here for you to provide the important Recent and Latest Current Affairs 16 November 2019, which have unique updates of Latest Current Affairs 2019 events from all newspapers such as The Hindu, The Economic Times, PIB, Times of India, PTI, Indian Express, Business Standard and all Government official websites. 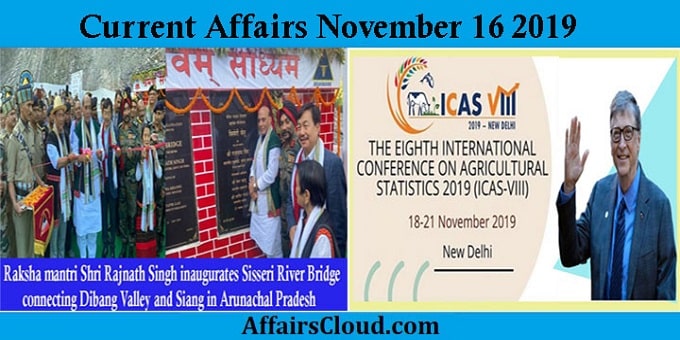 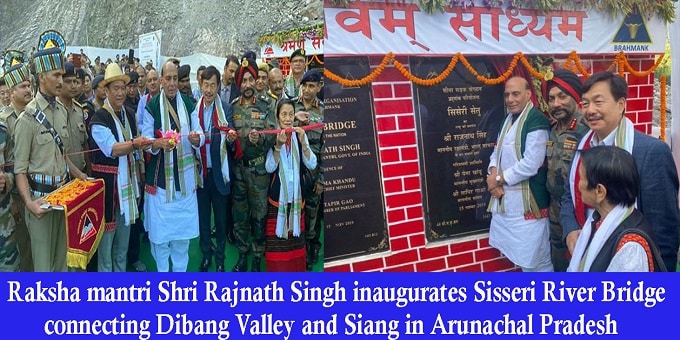 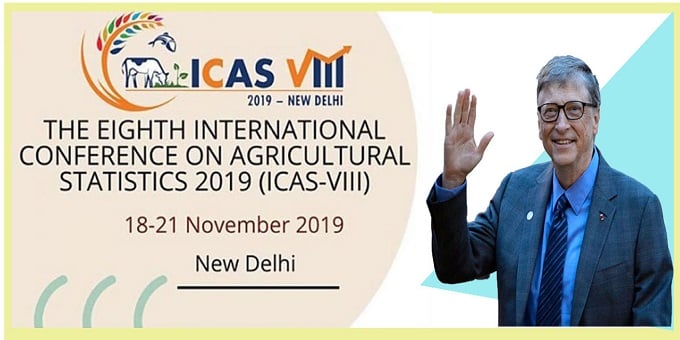 The 8th edition of the international conference on Agricultural Statistics (ICAS-VIII) is to be organised from November 18-21 2019 in New Delhi. Dr. Trilochan Mohapatra Director General of ICAR & Secretary of Department of Agricultural Research and Education (DARE) announced that the conference will be inaugurated by the Union Minister for Agriculture & Farmers Welfare Shri Narendra Singh Tomar. The Chief guest of the event will be Bill Gates (original name William Henry Gates III), co-founder of Microsoft Corporation.
Theme: The theme for the 2019 conference is “Statistics for Transformation of Agriculture to Achieve the Sustainable Development Goals (SDGs)”.
Conference Aim: The aim of the conference is to address challenges faced in producing data to report on the Sustainable Development Goals(SDGs) and to obtain/finalise best practises in agriculture statistics……Click here to Read More

CSIR’s -NGRI, Hyderabad  releases 1st ever Geochemical Baseline Atlas of India
On November 10, 2019, In a bid to understand and assess the environmental damage and help policymakers to devise a strategy, CSIR- NGRI ( Council of Scientific & Industrial Research- National Geophysical Research Institute), based in Hyderabad, Telangana, has released the 1st ever, ‘Geochemical Baseline Atlas of India’.
Key Points:
i.The Atlas, consists of 44 maps of metals, oxides, and elements present in top and bottom soils across India, will help to document the concentration and distribution of the chemical elements in the soils of India.
ii.Map Development: To develop the maps, the NGRI divided the globe into 5,000 cells of 160 km by 160 km each. Of it, India has 122 cells. The work was initiated in 2007 from cell number 1 which is in Kanyakumari, Tamil Nadu. The last cell is in Arunachal Pradesh. Soils from uninhabited places were collected. The work ended in 2011.
iii.The geochemical data of these maps will be given to International Union of Geological Sciences (IUGC), which will develop a global map.
About IUGC:
Formation- 1961
Member nations- 121
it is a non-governmental scientific organization aims to promote & encourage the study of geological problems, and facilitates international and interdisciplinary cooperation in the earth sciences.

DPIIT sets up 23-member Development council headed by Guruprasad Mohapatra for Bicycle
On November 16, 2019, Department for Promotion of Industry and Internal Trade (DPIIT), Ministry of Commerce and Industry, Government of India (GoI) has set up a 23 -member Development Council headed by Guruprasad Mohapatra (Secretary DPIIT) for Bicycle.
The Council, active for 2 years, will be responsible for planning in design, engineering and manufacturing of lighter, smarter, value added, safe and faster premium bicycles which are comparable with global standards for exports and domestic market.
i.About the council: The Joint Secretary, Light Engineering Industry Division in DPIIT, will be the Member Secretary. The Council has 9 ex-officio members & 7 expert domain members and 4 nominated members…..Click here to Read More On November 16, 2019, Union Home Minister Shri Amit Shah has inaugurated 15-day National Tribal Festival called Aadi Mahotsav 2019 based on the theme “A Celebration of the Spirit of Tribal Crafts, Culture and Commerce” at Dilli Haat, New Delhi. Organized jointly by Union Ministry of Tribal Affairs & TRIFED (Tribal Cooperative Marketing Development Federation of India Ltd), the festival will be concluded on November 30, 2019.
Key Points:
i.The tribal textiles manufactured by master tribal craftsmen from Jammu & Kashmir in North to Tamil Nadu in South and from Gujarat in West to Nagaland/Sikkim in East will be the major attractions of the festival.
ii.The festival will showcase tribal handicrafts, art, paintings, textiles, jewelry etc. through 200 stalls and will be offered for sale.
iii.More than one thousand tribal artisans and artists from 27 states will participate in this festival. During this period, the culture and tribal customs, festivals, martial arts, etc. of 20 states of the country will be demonstrated.
iv.During the current financial year (FY) 2020, 26 such festivals have been planned. Out of these, 8 festivals have been held in Shimla, Ooty, Leh-Ladakh, Visakhapatnam, Noida, Indore, Pune and Bhubaneswar.
About TRIFED :
It is an organisation of Union Ministry of Tribal Affairs,organizes “Aadi Mahotsav’  to provide direct market access to the tribal craftsmen in large metros and State capitals.

Piyush Goyal attended 9th BRICS trade ministers meet in Brazil
On November 11, 2019, the union commerce minister Shri Piyush Goyal attended the 9th BRICS trade ministers meeting which was conducted in Brasilia, Brazil. This was part of his tour to Brazil and the United States(US) from November 9-14, 2019. Trade facilitation, investment promotion, and cooperation in customs was the key focus of the trade ministers’ meet. During the meeting, issues related to cooperation in e-commerce, investment facilitation, Micro, Small and Medium Enterprises (MSMEs), Intellectual Property Right were discussed.
MoU: A Memorandum of Understanding(MoU) was signed between all the 5 BRICS (Brazil, Russia, India, China, South Africa) countries on trade and investment promotion…..Click here to Read More

Justice Akil Abdulhamid Kureshi takes oath as 5th Chief Justice of Tripura HC
On November 16, 2019, Justice Akil Abdulhamid Kureshi (59), the Bombay High Court judge, was sworn in as the 5th Chief Justice (CJ) of the Tripura High Court(HC). Governor Ramesh Bais administered the oath of office at old Raj Bhavan in Agartala. Kureshi succeeds Justice Sanjay Karol, who was sworn in as Chief Justice of Patna High Court.
Also, Justice Mohammad Rafiq, a judge of the Rajasthan High Court, was elevated as the chief justice of the Meghalaya High Court.
Key Points:
i.In May 2019, the Supreme Court (SC) Collegium had recommended Justice Kureshi’s elevation as Chief Justice of the Madhya Pradesh High Court, but the recommendation was not approved by the Centre.
ii.Kureshi had started his career as a lawyer in 1983 after obtaining an LLB(Bachelor of Laws) degree. In March 2004, he was designated as an additional judge of Gujarat High Court and was confirmed as a permanent judge in 2005.
About Tripura:
Capital- Agartala
Chief minister-Biplab Kumar Deb

France won 57th edition of BNP Paribas’s Fed Cup title 2019 in Perth, Australia
The 2019 Fed Cup by BNP Paribas (French banking financial service company) which was the 57th edition of the most important tournament in women’s tennis, was held from February 9- November 10, 2019. France defeated Australia with a 3-2 win in the finals which was held in Perth, Australia. This was the first time France had won the title since 2003 and 3rd title overall.
Key Points:
i.Most no of titles in fed cup is held by the United States of America(USA) with 18 titles in total.
ii.BNP Paribas was formed after the merger of Banque Nationale de Paris (BNP) and Paribas in 1999.
About Fed cup:
Fact –  It was launched to celebrate the 50th anniversary of the International Tennis Federation (ITF). it was known as federation cup until 1995. It is the world’s largest women’s international team sports competition in terms of the number of nations that compete.
Founded- 1963.

Overview of  9th World Para Athletics Championships 2019 held in Dubai, UAE from November 7 – 15, 2019
The 2019 World Para Athletics Championships, was the 9th  edition participated by 118 nations, held in Dubai Club for People with Determination Sports complex in Dubai, United Arab Emirates (UAE) from November 7 – 15, 2019. The tournament was organized by the World Para Athletics subcommittee of the International Paralympic Committee.
China secured the top spot in medal tally for the 3rd consecutive time with 59 medals (25 golds, 23 silvers and 11 bronze – including eight world records).
While India ranked 24th position with 9 medals( 2 gold, 2 silver, 5 bronze).
The list of Indian winners:

Venkaiah Naidu released book -Savarkar: Echoes from a Forgotten Past by Vikram Sampath in New Delhi

The Vice President of India Shri Venkaiah Naidu released book titled “Savarkar: Echoes from a Forgotten Past,1883-1924” at an event in New Delhi. The book was written by renowned Bengaluru based Historian and author Vikram Sampath and published by Viking Penguin publishers. The book describes the life of freedom fighter and philosopher Vinayak Damodar Savarkar, popularly known as Veer Savarkar.
Key Points:
i.Savarkar was the first leader to term the 1857 rebellion as the first war of independence. It was mentioned in Savarkar’s book ‘The History of the War of Indian Independence’, released in 1909.
ii.Members present: Rajya Sabha Member, Dr. Sonal Mansingh; Secretary General of Rajya Sabha, Shri Desh Deepak Verma; Secretary to Vice President, Dr. Subbarao; Chairman of Prasar Bharati, Dr. Suryaprakash, Shri Meghnath Desai, Shri Sanjeev Sanyal, Shri Ranjeet Savarkar and others were present during the event. 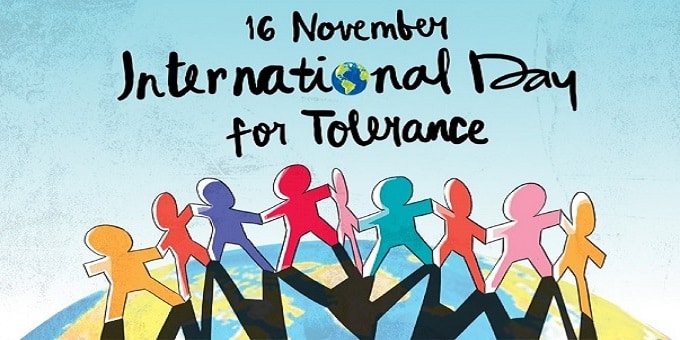 International Day for Tolerance is celebrated annually on November 16 to promote tolerance, respect, appreciation, and cooperation between the world’s different cultures. It was established by the United Nations Educational, Scientific and Cultural Organization (UNESCO) on November 16, 1995, by the resolution 51/95.
UNESCO-Madanjeet Singh Prize for the Promotion of Tolerance and Non-Violence 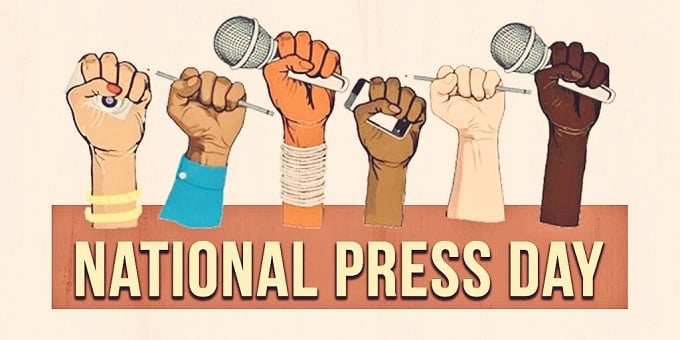 National Press Day is celebrated every year on November 16 to commemorate the establishment of the Press Council of India (PCI). It was formed on July 4, 1966, by the Parliament which officially started working on November 16, 1966. The Press Council keeps on checking the quality of report coverage provided by the Indian press.
This day was created to raise awareness of the role of free, pluralistic and independent news media in the development of the democratic society.  On this occasion, Vice President M. Venkaiah Naidu and Minister of Information and Broadcasting Prakash Keshav Javadekar conferred excellence in journalism awards 2019.
About Press Council of India (PCI): –

Odisha: ‘Bali Yatra’ Festival celebrated in Cuttack on November 12 2019
‘Bali Yatra’ is a festival that will be organized every year in remembrance of rich maritime history of the state. This festival was celebrated on November 12 for the year 2019 in Cuttack, Odisha. It was celebrated at the bank of Mahanadi river to mark the day of ancient mariners who sail to distant land of Bali, Sumatra, Java (Jawa) in Indonesia, Borneo and Sri Lanka, to develop their trade and Culture.
Key Points: –
i.The festival was marked on Kartika Purnima that Odia traders, known as Sadhaba Pua, used to start their sea voyages to Bali and other south Asian countries.
ii.It was inaugurated by Odisha Assembly Speaker Surjya Narayan Patro in the presence of Sidharto Reza Suryodipuro, Ambassador of Indonesia to India who was the chief guest.
iii.The Bali Yatra will be celebrated for 10 days to showcasing art traditional, household craft, food items.
About Odisha: –
Capital- Bhubaneswar
Chief Minister- Naveen Patnaik
Governor – Ganeshi Lal