We are here for you to provide the important Current Affairs November 1 2018, which have unique updates of all daily events from all newspapers such as The Hindu, The Economic Times, PIB, Times of India, PTI, Indian Express, Business Standard and all Government official websites. 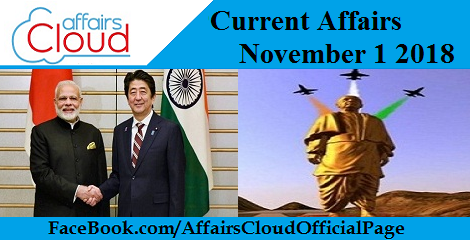 19th Meeting of the Financial Stability and Development Council (FSDC) held under the Chairmanship of the Union Finance Minister, Shri Arun Jaitley On October 30, 2018, the 19th Meeting of the Financial Stability and Development Council (FSDC) was held under the Chairmanship of the Union Minister of Finance and Corporate Affairs, Shri ArunJaitley in New Delhi.
Objective:
To review the current global and domestic economic situation and financial sector performance.
Key Points:
i. The issues discussed in the meeting were:

ii. The suggestions and recommendations of the meeting:

The Kingdom of Netherlands to be the Partner Country 25th DST – CII Technology Summit 2019
On October 31, 2018, Dr. Harsh Vardhan, Union Minister for Science & Technology, Earth Sciences, Environment, Forest and Climate Change announced that the Kingdom of Netherlands will be the Partner Country 25th DST – CII Technology Summit to be organized in 2019.
i. This was announced at the Silver Jubilee edition of Technology Summit – 2019.
ii. This is due to the cooperation between India and Netherlands in sectors such as affordable medical devices, urban water systems, big data and Internet of Things (IoT).
iii. The 25th Technology Summit -2019 will be made a global event and the visit of their Prime Minister to India in May 2018 has marked the 10th anniversary of Science, Technology & Innovation collaboration between the two countries.
Netherlands:
♦ Capital: Amsterdam.
♦ Currency: Euro. i. The two frigates of the Project 11356 class will be bought directly from Russia and 2 more will be built in an Indian Shipyard.
ii. The two ships to be brought from Russia are expected to be delivered by 2022 and have been designed to work with Ukraine-made gas turbines.
iii. These are under a ‘2+2’ scheme which was under the works since 2015.
iv. The gas turbines will be built at a local yard and the state-owned Goa Shipyard has been nominated for building the 2 more frigates.
Russia:
♦ Capital: Moscow.
♦ Currency: Russian ruble.

UP govt in partnership with Japan to develop ‘food value chain’
On October 30, 2018, the Uttar Pradesh cabinet presided over by UP Chief Minister Yogi Adityanath cleared a proposal for the development of ‘Food Value Chain’ in the state.
i. The ‘Food Value Chain’ will be developed by:
UP government and Japan’s agriculture, forestry and fisheries department.
ii. Under the agreement, in the first five years, Japanese companies will invest in agri-related and food-related industries.
Other cabinet approvals:
i. The Cabinet also decided to purchase 3,174 metric tonnes of sugar for devotees going to 2019 Kumbh Mela in Prayagraj.
ii. To boost one district, one product, common facility centres will be established in districts. The centres will have testing laboratories and design centres.
iii. It gave its approval for construction of Queen Ho memorial in Ayodhya, which will incur a cost of Rs 24 crores.
iv. It also gave its approval to amend UP Motor Vehicles Manual, 1998. According to this: 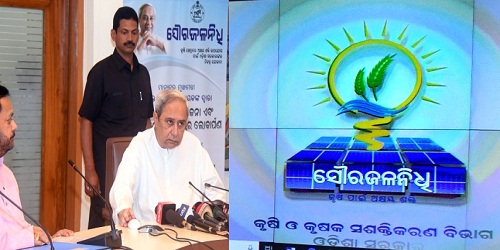 Objective:
To increase use of solar energy for helping farmers in irrigation.
Key Points:
i. ‘Soura Jalanidhi’ is a dug well based solar pump irrigation system in convergence mode.
ii. The total cost of the scheme allocated by the state government is: Rs. 27.18 crore in the 2018-19 financial year.
iii. Under this scheme, 5,000 solar pumps will be provided to farmers at a subsidy of 90 per cent to irrigate 2,500 acres of land.
iv. The Chief Minister distributed four go-ahead orders for installation of solar pump to the farmers.
v. Eligibility of the farmers for this scheme are:

INS Tarangini returned after 205-day world tour
On October 31, 2018, the sail training ship of Indian Navy, INS Tarangini based at Kochi, returned after a seven-month sail across the world.
i. The ship sailed over 22000 nautical miles across 15 ports in 13 countries in 205 days.
ii. The voyage named ‘Lokayan 18’ was flag-ged off on April 10 from Kochi to sail acr-oss the Arabian Sea, Red Sea, Suez Canal, Mediterranean Sea, Strait of Gibraltar, North Atlantic Ocean, Bay of Biscay, English Channel and North Sea, right up to Norway.
iii. It also participated in the culminating event of the ‘Three Festival Tall Ships Regatta’ at Bordeaux, France, as well as the ‘Tall Ships Races Europe 2018’.
iv. The ship was received by Rear Admiral RJ Nadkarni, VSM, Chief of Staff, Southern Naval Command.

PM Modi, along with his Japanese counterpart Shinzo Abe, attended 13th Annual Bilateral Summit at the Japanese Prime Minister’s Office in Tokyo. After the summit the two sides exchanged 32 MoUs. Highlights:
i. The position of 66 has been improved nine notches since the previous year and means that the Indian passport holders has been granted visa-free access to 66 countries.
ii. Other than India, Kyrgyzstan and Zimbabwe share the 66th rank.
iii. Singapore and Germany have the world’s “most powerful” passport with access to 165 countries.
iv. In the last place of the list is Afghanistan, ranked 91 with a score of 22, followed by Iraq at 90, Pakistan at 89 and Syria at 88 and Somalia at 87.
About the Index:
i. This is a part of citizenship planning firm Henley and Partners’ annual passport index.
ii. The index ranks national passports by the cross-border access they bring, assigning a “visa-free score” according to the number of countries a passport holder can visit visa-free or with visa on arrival.
iii. It measures the number of  countries a holder can go to without a visa.

MOD signed contract with GRSE Kolkata for supply of four survey vessels for Indian Navy
On October 30, 2018, Ministry of Defence awarded contract for design, construction and supply of four Survey Vessels for Indian Navy to Garden Reach Shipbuilders & Engineers (GRSE) Limited, Kolkata.
i. The order value for these four vessels is Rs. 2435.15 crore.
ii. The first ship is to be delivered within 36 months and remaining within an interval of six months for each vessel. The project completion time is 54 months from date of signing the contract.
iii. With this prestigious contract, GRSE’s Order Book as on date stands at Rs. 22,604 crore. The GRSE is currently handling a major project to make three Stealth Frigates for Indian Navy under P17A Project.

Malala Yousafzai to be honoured by Harvard University for her work promoting girls’ education
Nobel Prize Winner Malala Yousafzai will be conferred the 2018 Gleitsman Award on 6th December 2018.
Key Points:
i. This announcement was made by Harvard’s Kennedy School. Malala Yousafzai will be honoured by Harvard University for her work in promoting girls’ education.
ii. Malala Yousafzai became the youngest person to win the Nobel Peace Prize in 2014. She was awarded for her global work in supporting schooling for all children.
iii. When she was residing in Pakistan she survived an assassination attempt by the Taliban. She founded the nonprofit Malala Fund.
iv. She is 20 years old. She is a student at Oxford University in England.
v. The Gleitsman Award offers 125,000 US dollars for activism that has improved quality of life around the world. 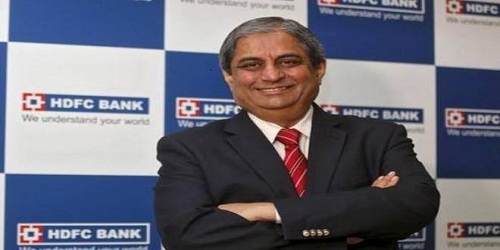 Key Points:
i. RBI has approved the re-appointment of Aditya Puri, as MD & CEO of HDFC Bank from November 1, 2018 to October 26, 2020 i.e. until he attains 70 years of age.
ii. Shareholders had approved his appointment in 2015 for a period of 5 years subject to RBI approval.
iii. Aditya Puri joined HDFC Bank in 1994. He is the longest-serving head of any private bank in India.
About HDFC Bank:
♦ Headquarters – Mumbai
♦ Tag line – We understand your world

NASA sets record with ‘supersonic’ parachute for Mars 2020 mission
NASA’s “supersonic parachute” that will have a major role in landing its Mars 2020 rover has created a world record by deploying in just four-tenths of a second and surviving 37,000 kg load. 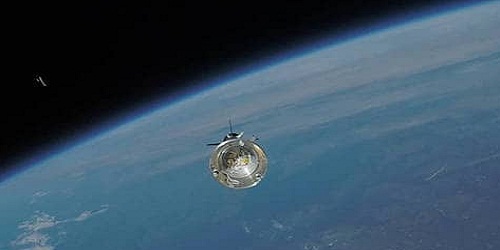 Key Points:
i. Following the launch of a 17.7-metre Black Brant IX sounding rocket, in less than 2 minutes a payload separated and started diving back through Earth’s atmosphere.
ii. When the payload had reached the appropriate height (38 km) and Mach number 1.8, the payload deployed a parachute.
iii. Within four-tenths of a second, the 180-pound parachute fully inflated. It was the fastest inflation in history of a parachute of this size. It created a peak load of nearly 70,000 pounds of force.
iv. The 37,000-kilogramme load was the highest ever load survived by a supersonic parachute.
v. The mass of nylon, Technora and Kevlar fibre of the parachute will play a major role in landing NASA’s Mars 2020 rover on Mars in February 2021 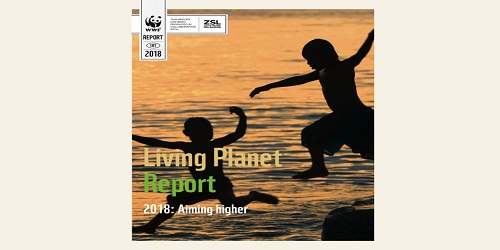 Highlights:
i. 60% of mammals, birds, fish and reptiles from 1970 to 2014, have been wiped out by humanity.
ii. 83% of mammals and half of plants have been destroyed by Human consumption and the worst hit is Freshwater habitats.
iii. South and central America is the worst affected region globally with a 89% drop, among the most affected are Giant otters and spider monkeys.
iv. The biggest cause of wildlife losses is the destruction of natural habitats, much of it to create farmland followed by Killing for food.
v. Three-quarters of all land on Earth is now significantly affected by human activities.
vi. 300 mammal species have been eaten into extinction.
About the Report:
i. The report documents the state of the planet—including biodiversity, ecosystems, and demand on natural resources—and what it means for humans and wildlife.
ii. It is published by the WWF every 2 years.
iii. This is the twelfth edition of the report.
iv. The various measurements are taken through multiple indicators including the Living Planet Index (LPI), provided by the Zoological Society of London (ZSL),
v. It used data on 16,704 populations of mammals, birds, fish, reptiles and amphibians, representing more than 4,000 species.
WWF International:
♦ Headquarters: Gland, Switzerland.
♦ Director-General: Marco Lambertini. Key Points:
i. Tata Steel signed the agreement with the Odisha Hockey Men’s World Cup 2018 to promote development through sports in India.
ii. The upcoming 14th edition of the FIH (International Hockey Federation) World Cup will be the 3rd time it is held in India and the first time it is held in the eastern part of India.
iii. Earlier, India had hosted the tournament in 1982 in Mumbai and in 2010 in New Delhi. 16 countries will take participate in the tournament.
iv. Tata Steel is the first private sector company in India to start a hockey academy.
About Hockey India:
♦ Formed – May 20, 2009
♦ President – Md. Mushtaque Ahmad
♦ CEO – Elena Norman
♦ Location – New Delhi

Clean Air Week from 1st to 5th November 2018 to control pollution in Delhi
‘Clean Air Week’ will be organized from November 1-5, 2018 to control air pollution in Delhi.
Key Points:
i. ‘Clean Air Week’ will be organised by the Ministry of Environment, Forest and Climate Change (MoEFCC) in collaboration with the Delhi government and the 4 major NCR cities.
ii. 52 teams have been formed to make sure compliance and safety and take quick action.
iii. The teams will be jointly flagged off by Union Minister for Environment, Forest and Climate Change, Harsh Vardhan and the Minister from Government of Delhi.
iv. This decision was taken in a meeting held under the Chairmanship of C.K. Mishra, Secretary, MoEFCC.
v. The teams will consist of local SDM as the team leader, senior official from MoEFCC and representatives from CPCB (Central Pollution Control Board), MCD and DPCC (Delhi Pollution Control Committee).
vi. Delhi will have 44 teams and the cities in NCR region: Gurgaon, Noida, Faridabad and Ghaziabad will have two teams each.