We are here for you to provide the important Current Affairs March 25 2019, which have unique updates of all daily events from all newspapers such as The Hindu, The Economic Times, PIB, Times of India, PTI, Indian Express, Business Standard and all Government official websites. 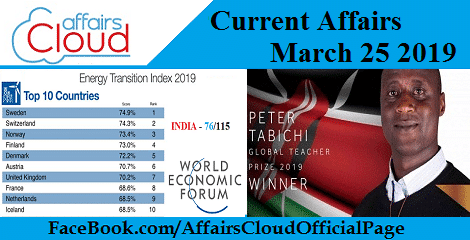 Key points
i. The motive of the conference was to shape India’s continued ascendancy in FinTech, build the narrative for future procedure and policy efforts, and to deliberate steps for complete financial inclusion.
ii. The Conclave has attributed 300 representatives from the financial space including central ministries, regulators, bankers, startups, service providers and entrepreneurs.
iii.Discussions were held on the themes such as Digital Onboarding of Customers/Merchants for Financial Inclusion, Building Financial Products for Millennial India, Emerging Areas of FinTech, Fast Tracking Investments in FinTech Industry and Financial Inclusion of MSMEs.

India’s ranks on the second edition of WEF global Energy Transition index is 76
On 25th March 2019, India ranks 76th (among 115 countries) on a global energy transition index which was compiled by Geneva-based World Economic Forum (WEF), based on their energy system performance and affordability. 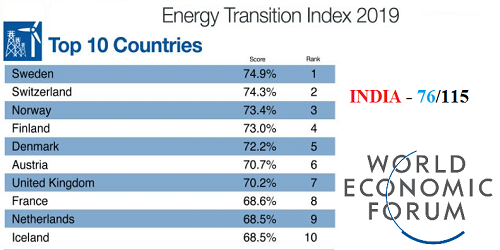 Key Points:
i. The top three performers are Sweden, followed by Switzerland and Norway.
ii. In the second edition of the Energy Transition Index, India improved its rank by two points from last year (2018) higher than China (82nd).
iii. Despite the fact that India has high pollution levels and high CO2 intensity amongst these 115 countries, it has made a significant improvement in its energy access and regulations in recent years.
iv. In the BRICS block of emerging economies, After Brazil (rank 46th) India ranked second best. Among the major economies, UK ranked 7th, Singapore ranked 13th, Germany ranked 17th, Japan ranked 18th and the US ranked 27th in this index.
v. India scored low in terms of system performance (ranking 97 and 86, respectively), but it ranks considerably higher in terms of readiness to adapt to future energy needs (45 and 61 respectively).
About World Economic Forum (WEF)
♦ Headquarters: Cologny, Switzerland
♦ Founder: Klaus Schwab
♦ Founded: January 1971

Reserve Bank of India (RBI) has appointed a five-member committee under the chairmanship of Nandan Nilekhani to strengthen digital payments
On 25th March 2019 Reserve Bank of India (RBI) has appointed 5-member committee under the chairmanship of Nandan Nilekani to strengthen digital payments as well as to boost financial inclusion through Financial Technology.It will provide recommendations in 3 months.
Key Point
i. The decision regarding the formation of committee was taken during the first event of Financial Technology (Fintech) Conclave, which was organized by NITI Aayog in New Delhi.
ii. The purpose of the event was to shape India’s predominance in FinTech, build the future strategy and policy to uplift the financial inclusion.
iii. With the revolution in the FinTech sector India’s aim is to emerge as a 10 trillion dollar economy.
iv. Financial technology, popularly known as FinTech, is the new technology and innovation to make financial services more accessible for the common people. Mobile banking, internet banking, digital payment are examples of Financial technologies.

Lalit Kala Academy announces 60th National Academy Awards winners
On 22nd March, Lalit Kala Akademi (LKA) announced 15 winners of the 60th Annual Academy Awards. All the awardees will be honoured with a plaque, a shawl and prize money of Rs 1 lakh at the 60th National Exhibition of Art, scheduled from March 25 to April 8 at the National Gallery of Modern Art (NGMA) and Sir JJ School of Art in Mumbai.
i. The Lalit Kala Akademi or National Academy of Art is India’s national academy of fine arts. It is an autonomous organisation, established in New Delhi in 1954 by Government of India to promote and propagate understanding of Indian art, in and outside the country………………………………………Click here to Read more i. Peter Tabichi gives away 80 per cent of his monthly income to the poor.
ii. The award recognises the “exceptional” teacher’s commitment to pupils in a remote part of Kenya’s Rift Valley.

Govindaraj re-elected as BFI President
On 24th March, 2019, K. Govindaraj has been unanimously re-elected as president of the Basketball Federation of India (BFI) at its annual general-body meeting.
i. Govindaraj announced that a new six-team women’s league will be held in next three months.
ii. He has declared to give proposal on restructure the National championships in the next 45 days and intend to have a zone-wise competition before the final round.

Naresh Goyal quits Jet Airways Ltd.
Naresh Goyal, the founder of Jet Airways (India) Ltd, has resigned from the board of the troubled airline after a meeting with the airlines board of directors.His wife Anita Goyal had also step down from the board of directors of the airline.
Key points
i. The lenders will immediately pump in about ₹1,500 crore into Jet Airways by way of issue of appropriate debt instruments against security of assets.
ii. A bidding process will be initiated by lenders for issuing shares to a new investor in Jet Airways in June.

IAF formally inducted four heavy-lift Chinook helicopters
On the lines of Indo-US deal inked in September 2015 for the purchase of 15 Chinooks by India, the first four heavy lift CH-47F (I) Chinook helicopters were inducted in the Indian Air Force, at Air Force Station, Chandigarh, in Squadron No 126 Helicopter Flight. These multi-role helicopters will act as life-saver during HADR (humanitarian assistance and disaster relief) missions.
i. Regarded as one of the most modern heavy lift chopper, the payload capacity of Chinook is about 10 tonne, as it is able to lift artillery, vehicles, road construction and engineer equipment as well as troops and supplies to mountainous sectors. It can also lift M-777 ultra-light howitzers of the Indian armed forces.
ii. India has purchased 15 Chinooks for $1.5 billion. The delivery of remaining helicopters is expected to be completed by 2023.
iii. The manufacturer of Chinook is Boeing Defense, Space & Security, US.

eBay joined hands with google to allow its users to pay via Google Pay
US-based e-commerce platform eBay has partnered with Google to offer Google Pay as a form of payment option in its new “managed payments” plan. The collaboration will enhance customer experience tailored to their personal preferences. 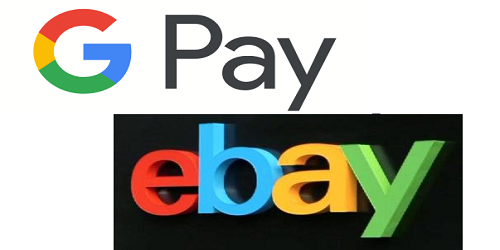 Oslo to become first city in the world to introduce Wireless Electric Car Charging Stations
Oslo, the capital city of Norway will become the world’s first city to install wireless, induction-based charging stations for its fleet of electric taxis with an aim to have a zero-emission cab system by the year 2023. Key Points:
i. Finland’s utility company ‘Fortum’ will collaborate with U.S. company Momentum Dynamics and the government of Oslo to install induction charging plates in the roads that allow for charging up to 75 kilowatts.
ii. Norway wants all new cars to be zero emission by 2025 whereas other nations, like Britain and France have similar goals for 2040.

2019 Badminton Asia mixed team trophy clinched by China
The 2nd edition of Badminton Asia Mixed Team Championships aka Tong Yun Kai Cup 2019 was held in Queen Elizabeth Stadium, Hong Kong. The championship was organized by Badminton Asia and Hong Kong Badminton Association. China has grabbed the championship by defeating Japan with 3-2.
i. In the mixed doubles, Chinese pair He Jiting and Du Yue has defeated apanese pair Yuta Watanabe and Arisa Higashino by 21-17, 21-17.
ii. In the men’s doubles, Yugo Kobayashi and Takuro Hoki of China beat Han Chengkai and Zhou Haodong of Japan by 16-21, 21-18, 21-13.
iii. In the women’s doubles, Li Yinhui and Du Yue won for China by beating Ayako Sakuramoto and Yukiko Takahata with 21-16, 21-19.

Folk Artiste and Radio commentator Anasuya Devi passed away at the age of 99
Kala Prapoorna awardee, Vinjamuri Anasuya Devi passed away at the age of 99 due to illness at Houston, USA. She was an eminent folk artist, radio commentator, harmonium player, music composer and author.
i. Originally hailed from Kakinada, Andhra Pradesh, she got her first gramophone record at the age of 8 years.
ii. Her two books, Bava Geetalu, a compilation of Folk Songs was released in 2018.
iii. In 1977, she was honored with a Doctorate by Andhra University. She was also an awardee of lifetime achievement award in America and ‘Queen of Folk’ award in Paris. 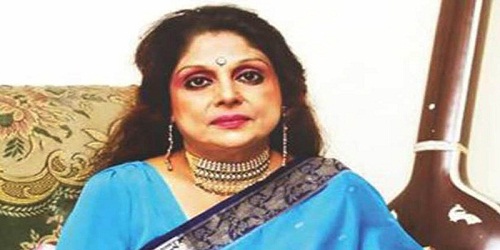 i. She was born on January 2, 1952, in Dhaka, Bangladesh.
ii. She was awarded with National Film Awards (best female singer) in 1990 and Ekushey Padak the second highest civilian award in Bangladesh in 1992. 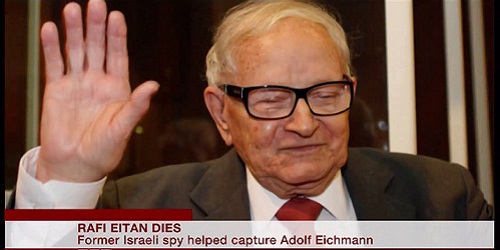 Rafi Eitan is seen as one of the fathers of Israel’s intelligence services. He was born on 23rd November 1926 at Ein Harod, Mandatory Palestine in Israel. Key Points:
i. The theme for International Day of Remembrance of the Victims of Slavery and the Transatlantic Slave Trade 2019 was “Remember Slavery: The Power of the Arts for Justice”.
ii.The day was first observed in 2008, which was recognized by United Nations General Assembly (UNGA) after adopting a resolution in 2007. i. He represented India in men’s high jump F-42 category during 2012 Summer Paralympics games held in London, where he clinched silver medal. With that, he became the first Indian to win medal in this category.
ii. The state is arranging all kind of assistance for Persons with Disabilities so that they can excercise their right comfortably.
Related Points
♦ Chief Electoral Officer of Karnataka – Sanjiv Kumar
♦ Chief Election Commissioner of India – Sunil Arora