We are here for you to provide the important Recent and Latest Current Affairs 12 March 2020, which have unique updates of Latest Current Affairs 2020 events from all newspapers such as The Hindu, The Economic Times, PIB, Times of India, PTI, Indian Express, Business Standard and all Government official websites. 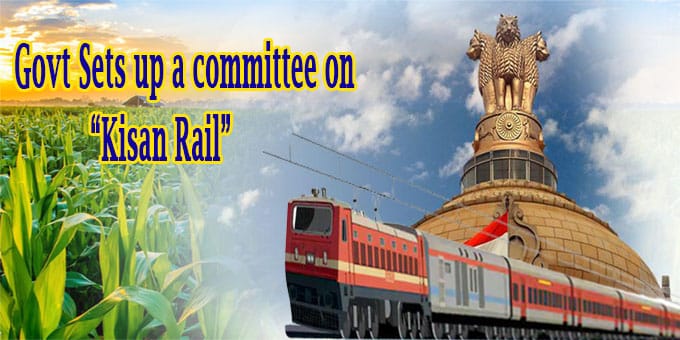 The committee has been formed under the aegis of Ministry of Agriculture and Farmers Welfare, consisting of representatives from Ministry of Railways also, to work out the modalities of ‘Kisan Rail’. During the FY2020-21 budget, Finance Minister Nirmala Sitharaman proposed to set up Kisan Rail through the public-private-partnership (PPP) mode for a cold supply chain to transport perishable goods. Already, newly designed Refrigerated Parcel Vans were procured through RCF (Rail Coach Factory), Kapurthala, Punjab to transport perishable parcel traffic…..Click here to Read More

Hola Mohalla’ festival celebrated at Sri Anandpur Sahib in Punjab
On March 10, 2020 ‘Hola Mohalla’ is the annual Sikh festival celebrated on the following day of the festival Holi at Sri Anandpur Sahib, Punjab. The festival will be celebrated for 3 days from March 10 to 12, 2020. The festival aims to physically strengthen Sikh community by holding acrobatic military exercises and mock battles.
Key Points:
i.Hola Mohalla: The festival holds an annual fair which was initiated by Guru Gobind Singh ji, the 10th sikh guru.
ii.In this festival, the Sikh community performs wrestling, mock sword fights, turban tying, bareback horse-riding, standing erect on two speeding horses, tent pigging etc., which is then followed by the music and poetry competition.
iii.On the third day of the celebration a long procession will be led by Panj Pyaras (collective name given to 5 Sikh men), which starts from Takth Keshgarh Sahib & passes through various important gurudwaras like Quila Anandgarh, Lohgarh Sahib, Mata Jito Ji and ends at the Takht.
About Punjab:
Capital- Chandigarh.
State Animal- Blackbuck.
State Bird- Northern goshawk. 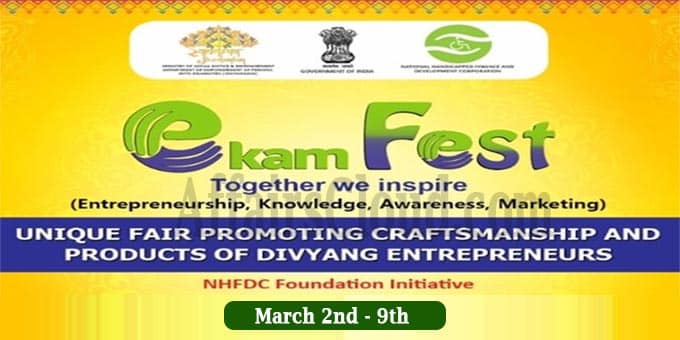 HAL set to build logistics base in Malaysia, Vietnam, Indonesia and Sri Lanka for the purpose of selling aircraft
On March 9, 2020, Hindustan Aeronautics Limited (HAL),an Indian state-owned aerospace and defence company, is exploring possibilities to build a logistics base in 4 countries (Malaysia, Vietnam, Indonesia and Sri Lanka) as part of its efforts to entice those nations to buy Tejas and light helicopters manufactured in India.
Key Points:
i.HAL chose these countries because they use many military aircraft and helicopters of Russian origin, which have “very poor” service capacity.
ii.It is noteworthy that the Indian Air Force (IAF) has already placed an order to make 40 Tejas, which has a high lifespan of 30 years& is developed by Aeronautical Development Agency & HAL.It is going to make an agreement soon in this regard. Under this, HAL has got orders to build 83 more aircraft for Rs 38,000 crore very soon.
iii.Prime Minister Narendra Modi in February 2020 set an ambitious target of $5 billion for defense exports over the next five years and asked all military manufacturers to work hard to achieve this goal.
iv.In line with the Indian government’s priorities, HAL is now focusing on promoting exports and identified South East Asia, West Asia and North Africa to sell key platforms such as Tejas, Rudra-Attack Helicopters and advanced light helicopter Dhruv.
v.It will also help India achieve its Defence target of Rs 35,000 crores by 2024. Currently India is exporting Defence products of worth Rs 17,000 crores.
About Hindustan Aeronautics Ltd (HAL):
Headquarters– Bengaluru, Karnataka
Chairman & Managing Director– R Madhavan In accordance with the Stockholm International Peace Research Institute’s (SIPRI) annual report titled “Trends in international arms transfers, 2019”, India is the world’s second largest arms importer during 2015-19 with its global share of 9.2% after Saudi Arabia, who has topped the ranking with global share of 12%. On the other hand, India ranked 23rd in terms of world’s largest arms exporters with global share of 0.2% and its main clients being Myanmar (46%), Sri Lanka (25%), and Mauritius (14%). United States (US) topped the list in this section with a share of 36%.

India is positioned 2nd, US tops  as most promising source of disruptive technologies : KPMG 2020 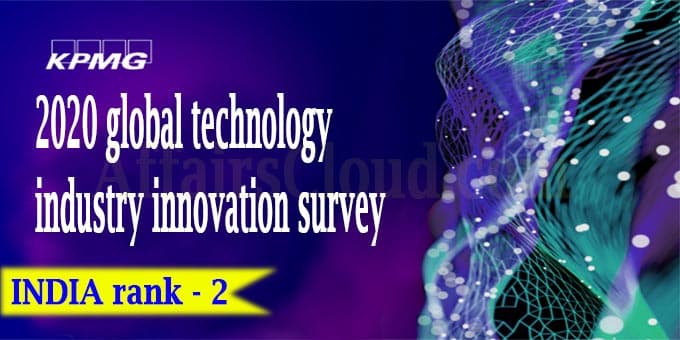 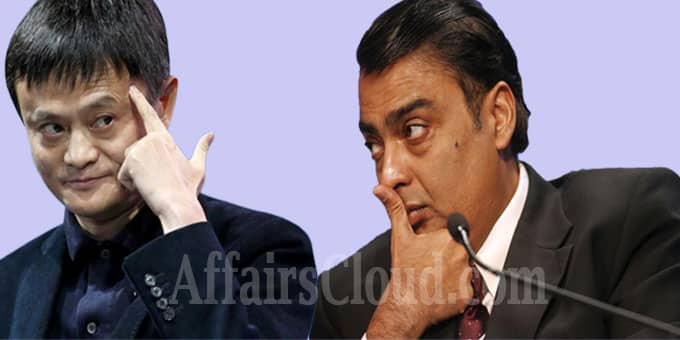 On March 10, 2020, as per Bloomberg Billionaires Index, Alibaba Group Holding Ltd. Founder Jack Ma has grabbed the title of Asia’s richest man with a net worth at $44.8 billion from Mukesh Ambani, Chairman & Managing Director (CMD) of Reliance Industries. The latter’s share has dropped by $5.8 billion to $41.8 billion due to coronavirus (COVID-19) epidemic which led to collapse in oil markets.

Google India unveils women skill development programme ‘DigiPivot’ in association with Avtar & ISB
On  March 7, 2020, Google India has launched a skilling programme for women called ‘DigiPivot’, where the woman who wishes to return to their company careers after a break or just planning to make mid-career shifts to digital advertising and marketing.
The programme will end on August 28,2020 with a day-long graduation occasion on the Google Hyderabad (Telangana) Campus.
Key Points:
i.The skilling programme has been developed jointly in partnership with a career portal service for women–Avtar & the Indian School of Business (ISB) with the aim to help the general gender mix within the digital advertising and marketing panorama in India and can offer an opportunity for 200 girls professionals to re-skill themselves.
ii.Woman who’re at present working and those that are ready to return to the workforce with 4-10 years of expertise in consulting, analytics, branding and sales and support are eligible to attend this programme.
iii.The selected woman will undergo a curated 18-week studying program and engagement (each offline & on-line) that aims to empower them with digital advertising and marketing data and instruments in addition to mentorship on strategic management abilities.
About Google Inc:
Headquarters– California,US
CEO– Sundar Pichai

TCIL signs MoU with The Gambia for MEA’s eVBAB Network Project
On march 9, 2020, Telecommunications consultants India Limited (TCIL) under the Ministry of Communications and Information Technology signed a Memorandum of Understanding (MoU) with Gambia. This MoU is signed for the participation in MEA’s (eVBAB) e-VidyaBharati and e-ArogyaBharati Network Project for tele-medicine and tele-education in Africa. 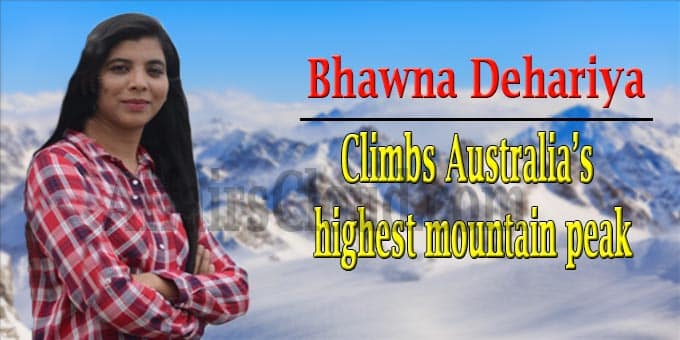 On March 10, 2020 Indian Mountaineer Bhawna Dehariya hails from Madhya Pradesh (MP) has successfully scaled Mount Kosciuszko [2, 228 meters], the highest mountain peak in Australia on the occasion of Holi.
Key Points:
i.Dehariya had scaled Mount Kilimanjaro [5, 895 meters] on the occasion of Diwali in the year 2019 and also felt fortunate that she had celebrated 2 biggest festivals of India at the mountain peaks.
ii.Dehariya also thanked MP Chief Minister (CM) Kamal Nath for supporting and motivating her to climb the summit. 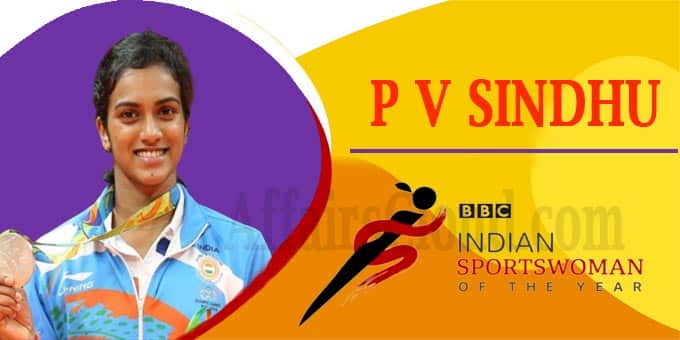 On March 8, 2020 Pusarla Venkata Sindhu, 24 years old, won BBC (British Broadcasting Corporation) Indian Sportswoman of the year award 2019 and former sprinter Pilavullakandi Thekkeparambil Usha was awarded with Lifetime Achievement award. The BBC award ceremony was held in New Delhi.  Union Sports Minister Shri Kiren Rijiju was the guest of honour and Tony Hall, BBC Director General hosted the awards ceremony event.
Key Points:
i.Nominees of the award: PV Sindhu was selected from the shortlist of 5 players which includes Sprinter Dutee Chand, Boxer Mary Kom, Wrestler Vinesh Phogat and Para-badminton player Manasi Joshi. The award was selected through the public vote to celebrate female athletes across India.
ii.Achievements of PV Sindhu: Sindhu was the first Indian to win badminton World Championship gold in Basel, Switzerland and has 5 World Championships medals.
iii.She is the first Indian badminton player to win a Olympic silver medal. Sindhu, at the age of 17, entered top 20 of the World rankings and has been in the top 10 for the past 4 years.
iv.About PT Usha: The Lifetime Achievement award was awarded for her contribution to Indian sports & inspiring generations of players.
v.The Indian Olympics Association also named PT Usha as “Best Sportswoman of the Century” and she also won 100 international medals and awards during her career. 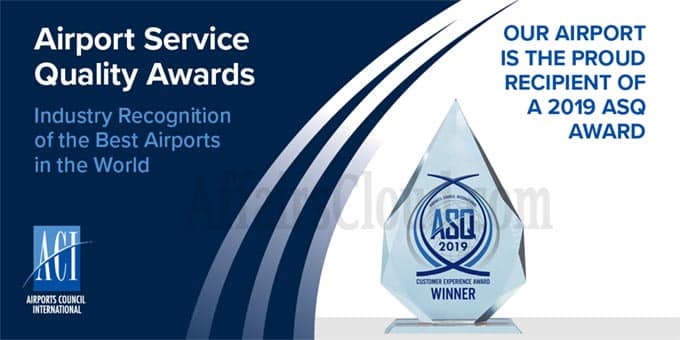 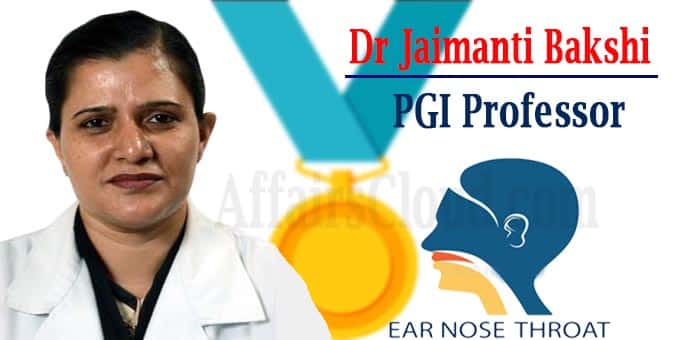 On March 8, 2020 Dr Jaimanti Bakshi, Professor & Unit Head II, Department of Otolaryngology and Head Neck surgery at PGIMER (Post Graduate Institute of Medical Education & Research), Chandigarh was awarded with “Best Citizens of India”. The award was given by “GEPRA” (Global Economic Progress and Research Association) during the National Unity conference held in Chennai, Tamil Nadu (TN) .
Key Points:
i.Award Contribution: Dr Bakshi was awarded for her contribution and individual achievements towards the National Development by her services to the people suffering from many ENT (Ear Nose Throat) diseases, head and neck cancer.
ii.GEPRA functions under Government of India (GOI). 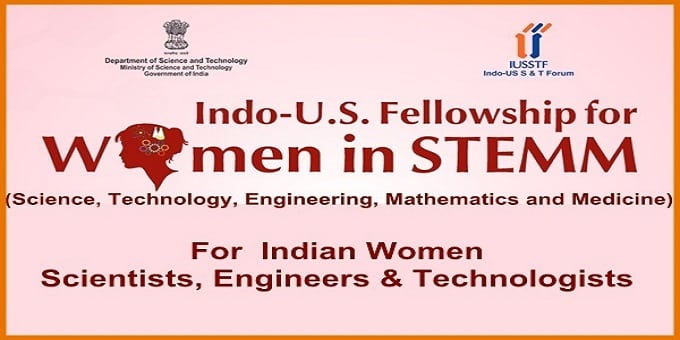 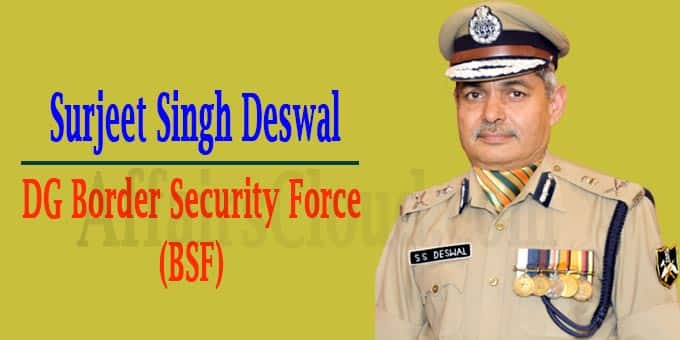 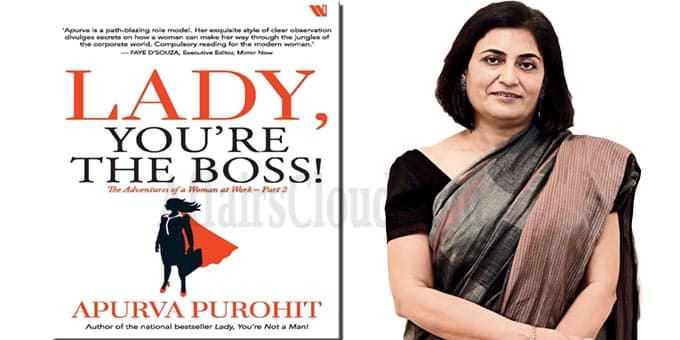 On September 28, 2019 Apurva Purohit the President of the Jagran Group, one of India’s largest multi-media conglomerates launched her 2nd book- ‘Lady, You’re the Boss!’, which aims to address the challenges faced by women climbing the corporate ladder.It is published by  Westland Publications (an Amazon company).
Key Points
i.The book is drawn from her personal experiences where she talks about how women minimise themselves, suffer from the imposter syndrome, &  settle for less than they are capable of, because of feelings of inadequacy & a desire to feel needed and liked.
ii.Her 1st book, ‘Lady, You’re Not a Man!: The Adventures Of A Woman At Work’ which turned out to be national best selling book & is published by Rupa Publications Private Limited.
iii.The author is named as one of the Most Powerful Women in Business as per Fortune India in 2018 & 2019 &   India Today Group 2016, 2018 & 2019, & also featured  in Fortune India’s Most Powerful Women in Business list 2018 & 2019 The CISF (Central Industrial Security Force) Raising Day is observed every year on 10th March under the Ministry of Home Affairs. The 51st CISF Raising Day is celebrated on March 10, 2020, for better protection and security throughout the country and to create awareness among the public regarding the role and functions of CISF.

Central Industrial Security Force(CISF):
CISF was established on 10th march 1969 under an Act of the Parliament of India with a Motto – Protection and Security. Its Headquarters is situated at New Delhi. 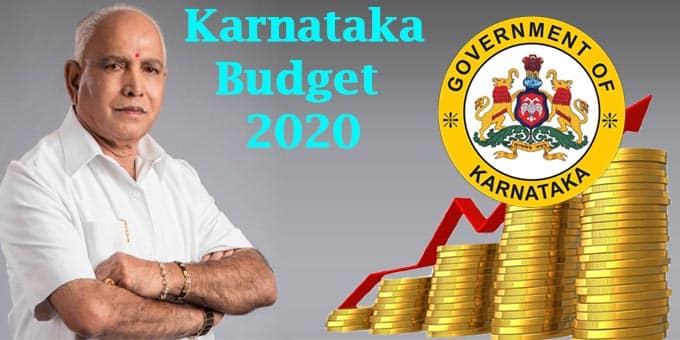 On March 05, 2020, Karnataka Chief Minister (CM), Bookanakere Siddalingappa Yediyurappa ,who also holds the  finance ministry portfolio, has presented the state budget for the fiscal year 2020-21 at Vidhana Soudha, the Karnataka State Legislative Assembly. It is his 7th budget as the CM.
i.The State government will soon write to the Centre on financial allocation to the Centre being cut in the 15th Finance Commission…..Click here to Read More

Sikh ruler Maharaja Ranjit Singh named as ‘Greatest Leader of All Time’ in BBC poll
Maharaja Ranjit Singh was named the “Greatest Leader of All Time” in a poll conducted by ‘BBC World Histories Magazine’, who is the 19th century ruler of the Sikh Empire in India, has beaten competition from around the world. African Independence Fighter Amílcar Cabral spots second, which is followed by Britain’s war-time Prime Minister Winston Churchill.