In accordance with the Stockholm International Peace Research Institute’s (SIPRI) annual report titled “Trends in international arms transfers, 2019”, India is the world’s second largest arms importer during 2015-19 with its global share of 9.2% after Saudi Arabia, who has topped the ranking with global share of 12%. On the other hand, India ranked 23rd in terms of world’s largest arms exporters with global share of 0.2% and its main clients being Myanmar (46%), Sri Lanka (25%), and Mauritius (14%). United States (US) topped the list in this section with a share of 36%. 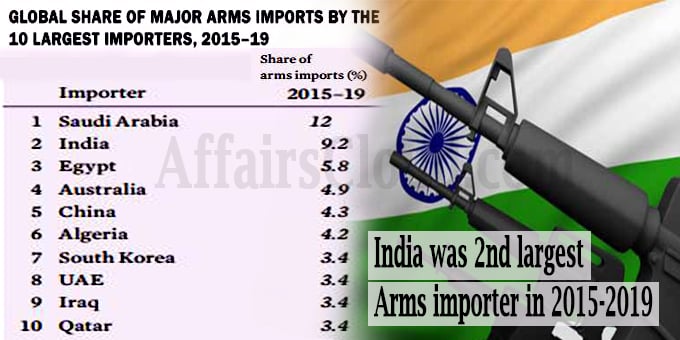 Following table showing the top 5 in different sections along with their global share during 2015-16:
[su_table]

ii.The 5 largest arms importers together accounted for 36% of all arms imports. Saudi Arabia, India and China were also among the top five importers during 2010–14.