We are here for you to provide the important Current Affairs January 7 2019, which have unique updates of all daily events from all newspapers such as The Hindu, The Economic Times, PIB, Times of India, PTI, Indian Express, Business Standard and all Government official websites. 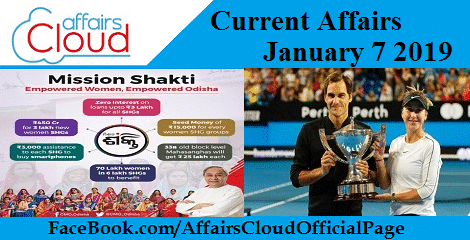 Ministry of HRD constitutes a task force to look into the issue of JNV suicides
On 3rd January 2019, the Ministry of Human Resource Development constituted a task force to look into the circumstances of reported suicides of 49 students, including Dalits and Adivasi students, of residential Jawahar Navodaya Vidyalayas (JNVs) between 2013 and 2017.
Key Points:
i. The task force, to be headed by psychiatrist Dr. Jitendra Nagpal, has been constituted to look into the circumstances leading to the suicidal deaths of students residing in the hostels of JNVs.
ii. The task force will also suggest ways and means to arrest the trend of suicides by students of JNVs.
iii. Furthermore, a proposal to engage two full time counselors (one male and one female) in each of the 630 functional JNVs has also been sent to the Department of Expenditure for approval from the HRD Ministry.
About Ministry of Human Resource Development:
♦ Minister: Prakash Javadekar
♦ Minister of State: Dr. Satya Pal Singh, Shri Upendra Kushwaha
♦ Headquarters: New Delhi

Government notifies High-Level Committee for implementation of Clause VI of Assam Accord
Ministry of Home Affairs, Government of India has notified a High-level committee of nine members under the chairmanship of Shri M.P. Bezbarauah for implementation of Clause VI of the Assam Accord.
What is Clause VI?
The Clause VI of Assam Accord envisaged that appropriate constitutional, legislative and administrative safeguards should be provided to protect, preserve and promote the cultural, social, linguistic identity and heritage of the people of Assam.
Key Points
i. The Committee will submit its report within 6 months from the date of notification.
ii. The 9 member Committee headed by retired IAS M.P. Bezbarauah includes eminent Assamese persons from different fields.
iii. The State Government of Assam will provide necessary administrative and logistics support to the committee.
iv. The effectiveness of actions since 1985 will be examined to implement clause 6 of the Assam Accord.
v. The Committee will assess the required quantum of reservation of seats in the state Assembly and local bodies for the people of the state.
vi. The Committee is also tasked to assess the requirement of measures that needs to be taken to protect Assamese and other indigenous languages of Assam.
About Assam
♦ Capital: Dispur
♦ Governor: Jagdish Mukhi
♦ Chief Minister: Sarbananda Sonowal
♦ National Parks (NP): Kaziranga NP, Dibru-Saikhowa NP, Manas NP, Nameri NP, Orang NP i. This was announced at the ‘Mission Shakti’ convention attended by about 50,000 women.
ii. In the convention, the chief minister did the following: Key Points:
i.  This year’s Kite festival is inaugurated by Gujarat Governor O P Kohli,in which Chief Minister Vijay Rupani, Ahmedabad Mayor Bijal Patel and State Revenue Minister Kaushik Patel also addressed.
ii. This year’s kite festival is participated by about 500 kite fliers from 19 cities of Gujarat and 13 different states of the country are participating. Besides more than 150 kite fliers from 45 different countries are also taking part in the festival.
iii. This year, the Gujarat government has also decided to organise a kite festival at Kevadia, the site of the Statue of Unity, a memorial to Sardar Patel and the also the world’s tallest statue.Other Venue’s are Vadodara, Kevadiya, Dwaraka, Surat, Rajkot, Jetpur, Songadh, Saputara and Dhordo in which the Kite festivals are planned to take place in the coming days.
About Gujarat:
♦ Capital: Gandhinagar
♦ Chief Minister: Vijay Rupani
♦ Governor: Om Prakash Kohli
♦ National Parks (NP) in Gujarat: Gir Forest NP, Blackbuck NP, Marine NP and Vansda NP 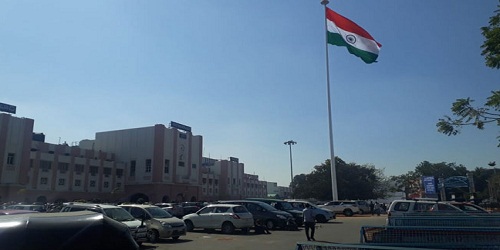 i. This was done according to the Railway Board’s order to hoist the national flag at 75 A1 category railway stations.Kacheguda, Hyderabad became the 2nd and 3rd railway Stations to hoist the100-foot tall pole.
ii. The flag would be guarded by the Railway Protection Force (RPF).
iii. Furthermore according to the order, SCR has taken the initiative to hoist the National Flag at 2 other ‘A1’ category Railway Stations they are Vijaywada and Tirupati. 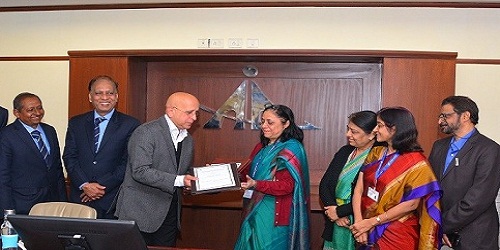 i. The MOU is under government of India’s ‘Make in India’ concept to indigenously design and develop CNS systems.
ii. SAMEER is an autonomous research and development (R and D) institute under Ministry of Electronic and Information Technology (MeitY).

Iran approved anti-money laundering bill for ease of business
On January 5, 2019, Iranian council known as the Expediency Council approved an anti-money laundering bill to ease trade
i. This bill will be in line with the standards set by the Financial Action Task Force (FATF).
Background:
Iran is alone with North Korea on the FATF’s blacklist — although the Paris-based organisation has suspended counter- measures since June 2017 while Iran works on reforms.
Iran:
♦ Capital: Tehran.
♦ Currency: Iranian rial.

National Awards conferred to 97 Anganwadi Workers under ICDS Scheme by Smt. Maneka Sanjay Gandhi in NewDelhi
On January 7, 2019,Ministry of Women & Child Development,Union Minister Smt. Maneka Sanjay Gandhi conferred National Awards to 97 Anganwadi Workers(AWWs) for Exceptional Achievements for the year 2017-18, under Integrated Child Development Scheme (ICDS) in New Delhi.
About the selection:
i. National Level awards to AWWs are given to the awardees nominated by States/UTs out of the State/UT Level awardees.
ii. The nominations received from the States/UTs are screened and recommended by a Screening Committee headed by Rakesh Srivastava,Secretary, MWCD.
iii.The selection of awardees is made by the Selection Committee headed by Hon’ble Minister for Women & Child Development.
About the Award:
i. The awards of National Level will comprise of cash prize Rs. 50,000, which has been increased from Rs. 25,000,  and a citation.
ii. The number of awards has also been doubled.
iii. State Level award comprises of a cash prize of Rs. 10,000 and a citation.
Background:
The scheme of awarding AWWs was formulated by the government in the year 2000-2001.
Ministry of Women and Child Development:
♦ Union Minister: Smt Maneka Gandhi.
♦ Minister of State: Dr. Virendra Kumar.
♦ Secretary: Shri Rakesh Srivastava.

i. Images were sent back to the Earth via the relay satellite ‘Queqiao’.
ii. In Chinese folklore, Yutu is the white pet rabbit of Chang’e, the moon goddess who lent her name to the Chinese lunar mission.
iii. China’s lunar probe is a part of its ‘Made in China 2025’ project.
iv. It follows a homegron Chinese Global Positioning System named BeiDou Navigation Satellite System.
China:
♦ Capital: Beijing.
♦ Currency: Renminbi.

Hopman Cup: Roger Federer & Belinda Bencic retain title for Switzerland
From 29 December 2018, the Hopman Cup which is an annual international eight-team indoor hard court tennis tournament was held in Perth, Western Australia. It is a mixed competition in which male and female players are on combined teams and represent their countries. The Event was concluded on 5th January 2019. Key Points:
i. This year Switzerland’s Roger Federer and Belinda Bencic secured a 2-1 victory over Germany’s Angelique Kerber and Alexander Zverev to win the Hopman Cup for the second year in a row. It was Switzerland’s fourth title overall, behind only the United States with six.
ii. This year’s tournament is the 31st edition of the Hopman Cup and potentially be the final edition of the tournament as it will be replaced by an ATP tournament from next year.
iii.In this year’s tournament for the first time in history, Roger Federer and Serena Williams faced each other in a competitive event in which Federer came out victorious alongside Bencic by defeating the pair of Serena Williams and Frances Tiafoe in a mixed doubles round robin match.
Roger Federar first person to win Hopman Cup thrice
Twenty-time Grand Slam champion Roger Federer is the first player to win three Hopman Cups, twice with Bencic and once with Martina Hingis.
About Australia:
♦ Capital: Canberra
♦ Currency: Australian Dollar
About Switzerland:
♦ Capital: Bern
♦ Currency: Swiss Franc

ATP World Tour tennis tournament (Maharashtra Open 2019)
From 31st December 2018, 24th Edition of ATP World Tour Tennis tournament, Maharashtra Open – 2019 also known as Tata Open Maharashtra organized by Association of Tennis Professionals (ATP) was held in Pune, Maharashtra. The event concludes on 5th January 2019.
Key Points:
i.The total Prize money was US $527,880.
ii.The tournament is played on outdoor hard courts at Shree Shiv Chhatrapati Sports Complex in Pune, Maharashtra.
World number six Kevin Anderson of South Africa defeated Ivo Karlovic in Men’s Singles at the Maharashtra Open
On 5th January 2019, world number six Kevin Anderson of South Africa won the three-set finals against Ivo Karlovic of Croatia to clinch the Tata Open Maharashtra singles title in Pune.
Key Points:
i. It was Anderson’s fourth victory in five meetings against Karlovic and sixth career title overall.
ii. Karlovic became the oldest player at 39 to play a tour-level final since 1977.
iii. In another record, Anderson at 6-foot-8 (2.03 meters), and Karlovic at 6-foot-11 (2.11 meters), combined to make it the tallest final in the Open era.
iv. The Maharashtra Open is viewed as a key warm-up event for the first Grand Slam of the year, the Australian Open, which starts in Melbourne on 14 January.
Indian tennis pair of Rohan Bopanna and Divij Sharan defeated the United Kingdom’s Luke Bambridge and Jonny O’Mara and clinched the ATP tour title in men’s doubles event at the Maharashtra Open
On 5th January 2019, Rohan Bopanna and Divij Sharan, the Asian Games 2018 gold medallists, started the 2019 season by winning India’s only ATP 250 tournament, Tata Open Maharashtra in Pune after beating a British pairing of Luke Bambridge and Jonny O’Mara in straight sets by 6-4, 6-3.
Key Points:
i. This was two-time champion Bopanna’s 18th tour-level trophy, while for Sharan it was his fourth trophy from five tour-level doubles finals.
ii. The winning pair will next participate in the Davis Cup, scheduled for February 1-2 at the South Club in Kolkata.
About Association of Tennis Professionals (ATP):
♦ The ATP is the governing body of the men’s professional tennis circuits – the ATP Tour, the ATP Challenger Tour and the ATP Champions Tour.
♦ Chairman & President: Chris Kermode
♦ Headquarters: London, United Kingdom
About Maharashtra:
♦ Governor: C. Vidyasagar Rao
♦ Chief Minister: Devendra Fadnavis