We are here for you to provide the important Current Affairs January 5 2019, which have unique updates of all daily events from all newspapers such as The Hindu, The Economic Times, PIB, Times of India, PTI, Indian Express, Business Standard and all Government official websites. 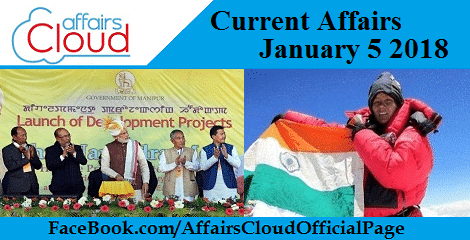 i. Addressing a public gathering, he inaugurated 12 projects consisting of eight key development projects related to water supply and tourism and four schemes in Manipur. These include:

Parliament passes NCTE amendment Bill
On 3rd January 2019, the Parliament following the approval from the Rajya-Sabha passed a National Council for Teacher Education (Amendment) Bill(NCTE), 2018 to provide retrospective recognition to central and state government funded institutions offering B.Ed and related courses that are not recognized under the NCTE Act.
Key Points:
i. The NCTE (Amendment) Bill which will be a one-time measure would help over 17,000 students who have obtained B.Ed degrees from those institutions which do not have NCTE approval for the course under the 1993 law.
ii. 23 state and central universities and colleges offering B.Ed courses were found not recognised by the Council.
iii. The government would ensure that the quality of institutes offering B.Ed courses is maintained and proposes to start integrated course in B.ED as in Law and other courses from 2020.
iv. Lok Sabha has already passed this bill on July 23, 2018.
About National Council for Teacher Education (NCTE) Act, 1993:
The NCTE Act, 1993 came into force on 1 July 1995 and is applicable throughout the country, except the State of Jammu and Kashmir. The NCTE plans and co-ordinates the development of the teacher education system throughout the country and ensure maintenance of norms and standards in the teacher education system.
About Ministry of Human Resource Development:
♦ Minister: Prakash Javadekar
♦ Minister of State: Dr. Satya Pal Singh, Shri Upendra Kushwaha
♦ Headquarters: New Delhi

Parliamentary Panel Report on Western Ghats
On 31st December, 2018 the Parliamentary panel, which keeps track of assurances given by ministers, presented its latest report on Western Ghats on the floor of the Rajya Sabha.
Area of interest of the Panel:
The panel examined issues regarding the categorisation of the Western Ghats as Ecologically Sensitive Areas (ESA) as per the recommendations of two committees led by Madhav Gadgil and K. Kasturirangan.
Key Findings of the Panel:
i. The ecologically sensitive areas (ESA) which is stretched in about 56,000 square kilometres of the Western Ghats could not be earmarked as ‘no-go’ zones due to State governments’ ‘insensitivity’ though three draft notifications had been issued over four years for earmarking ESA.
ii. The recent monsoon floods in Kerala and parts of Karnataka should serve as alarm bells for the administrations in the States of Goa, Gujarat, Maharashtra, Kerala, Tamil Nadu and Karnataka, which have failed to mark ESA in the Western Ghats.
iii. The polluting activities and large-scale deforestation, mining, and construction are continuing unabated in the ESA, hurting the ecology of the Western Ghats.
iv. Insensitivity towards ecology of Western Ghats was making the six States of Western Ghats vulnerable to floods and landslides
v. The implementation of the recommendations of the Kasturirangan report is only possible with active support of local population and also requires consultation with the State government at micro level to achieve the objectives of saving the Western Ghats.
vi. The committee recommended that the Ministry of Environment, Forest and Climate Change should constitute a Committee to address the issues and grievances of local people.
About Ministry of Environment, Forest and Climate Change:
♦ Minister: Dr. Harsh Vardhan
♦ Minister of State: Dr. Mahesh Sharma

ii. After this the total number of centrally protected sites or monuments under ASI are 3693.
iii. Among that, Uttar Pradesh has 745 sites, Karnataka has 506 and Tamil Nadu has 413 sites, marking them as the states having the highest number of ASI-maintained sites.
iv. In 2016, 2017, no new monuments were included in the list, the last of the included monument/site was done in 2015 which was- Vishnu Temple in Kerala’s Wayanad district.
Background:
Under the Act, any monument or site that was erected and has been in existence for 100 years is dubbed as Ancient.
ASI:
♦ Headquarters: New Delhi.
♦ Founded: 1861.
♦ Under Ministry of Culture.
♦ Director General: Smt. Usha Sharma.

Andhra tops ACI’s Ease of Doing Business index
In the latest ranking of Singapore’s Asia Competitiveness Institute’s (ACI), Ease of Doing Business (EDB) index 2018, Andhra Pradesh emerged on top of the 21 states of India that were considered for the ranking,While Maharashtra and Delhi came in second and third place, respectively. 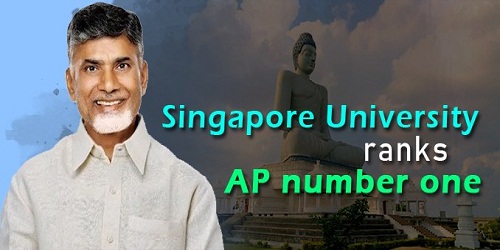 Key Points:
i.  Andhra Pradesh rose from the 5th rank in 2016 to the top spot in 2018.
ii. The ACI’s EDB index is based upon three parameters called ABC -Attractiveness to Investors, Business Friendliness and Competitiveness Policies.The index captured the business environment at the sub-national level on the basis of 72 hard and soft indicators.
iii. The Ease of Doing Business (EDB) list is compiled by a team of researchers led by Tan Khee Giap, who is the co-director of Asia competitiveness institute (ACI), and associate professor at Lee Kuan Yew School of Public Policy, National University of Singapore.
iv. Suggestions regarding areas where improvement was needed in the state of Andhra Pradesh include bridging numerous institutional and infrastructural gaps in order to sustain its position in the future and improvement in sub environments such as facilitating business operations, infrastructure resilience and market potential.
About Andhra Pradesh:
♦ Chief Minister: N. Chandrababu Naidu
♦ Governor: E. S. L. Narasimhan
♦ Capital: Amaravati
About Singapore:
♦ Capital: Singapore city
♦ Currency: Singapore dollar
♦ President: Halimah Yacob
♦ Prime Minister: Lee Hsien Loong

ii. The construction of Somb Saraswati barrage and Saraswati reservoir would enable the storage of 1,000 hectare metres of water.
iii. The board also approved construction of bridges at different locations and a Saraswati ghat and interlinking of the Markanda River with that of Saraswati, through the Kainthla supply channel.
iv. He also launched a mobile App developed by the Haryana Saraswati Heritage Development Board.
v. He also approved the logo of the Saraswati Heritage Development Board.
Haryana:
♦ Chief Minister: Shri. Manohar Lal.
♦ Governor: Shri. Satyadeo Narain Arya.

Cyber frauds in Indian banking sector hiked over 50% in FY18; it is one-third of the overall amount of frauds in India: RBI
On December 28, 2018, according to the Reserve Bank of India’s Report on Trend and Progress of Banking in India 2017-18, India witnessed a jump of 159 per cent to almost Rs.110 crore, from Rs.42.3 crore in 2017-18.
i. The volume of cyber fraud at banks has doubled in a year.
ii. A total of 2,059 cases of cyber fraud were reported in 2017-18 amounting to Rs 109.6 crore.
iii. A total of 5,917 bank frauds were reported in 2017-18 and nearly one-third of these were cyber frauds.
iv. As a measure, the RBI plans to set up a compliance and tracking system portal to tackle the proliferation of cyber fraud and seeks to establish a better redressal mechanism for consumers.
v. This would address cybersecurity complaints from all regulated entities including Prepaid Payment Instruments (PPIs) and mobile banking interfaces.
vi. The process of redressal mechanism will be directed under the Internal Ombudsman Scheme of 2018.
Other News:
i. Deposit frauds declined 49 per cent to ₹457 crore (₹903 crore).
ii. Foreign exchange transaction frauds were down 35 per cent to ₹1,426 crore (₹2,201 crore).
iii. In 2017-18, frauds related to off-balance sheet operations, foreign exchange transactions, deposit accounts, and cyber activity took centre stage.
iv. Overall a whopping 72 per cent year-on-year jump was witnessed in frauds in FY18,
Internal Ombudsman Scheme of 2018:
♦ In May 2015, RBI advised all public-sector and select private and foreign banks to appoint Internal Ombudsman (IO) as an independent authority to review complaints that were partially or wholly rejected by the respective banks.
♦ RBI made it mandatory for lenders with more than 10 branches to have an independent authority.
♦ The IO got its statutory powers under Section 35 A of the Banking Regulation Act, 1949 in the form of ‘Internal Ombudsman Scheme, 2018’.
♦ The Scheme covers, inter-alia, appointment / tenure, roles and responsibilities, procedural guidelines and oversight mechanism for the IO. Key Points:
i. The new framework will allow the existing custodians to add commodities as an asset class and provide physical delivery of both the securities and commodities.
ii. Currently, the regulation on custodian of securities allows safekeeping of securities, gold or gold related instruments, title deeds of real estate and services incidental but doesn’t allows protection of goods, which are underlying assets of commodity derivatives.
iii. Under the new rules, the responsibility of custodians will not be limited to holding of securities but would also include holding of goods.
iv. The new regulations will enable participation of institutional investors such as mutual funds and portfolio managers in commodity derivatives market.
About Securities and Exchange Board of India (SEBI):
♦ Chairman: Ajay Tyagi
♦ Headquarters: Mumbai
♦ Founded: 12 April 1992 through the SEBI Act, 1992 Key Points
i. The Padma Shree Awardee, Arunima Sinha became the first woman amputee to climb Mount Everest in 2013.
ii. She is from Uttar Pradesh and had lost one of her legs in a horrific incident in which she was thrown off the Padmawati Express train in 2011.
iii. Arunima Sinha’s aim is to summit seven peaks across seven continents. She had already scaled five peaks which are Mt Everest, Mt Kilimanjaro, Mt Ebrus. Mt Kosciuszko and Mt Aconcagua. 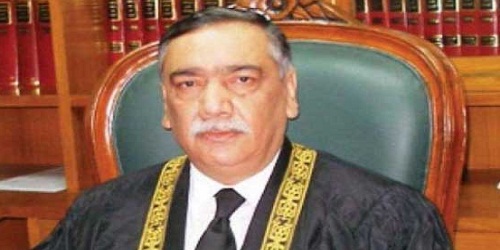 i. He will succeed incumbent Chief Justice Saqib Nisar who will be retiring from service on January 17, 2019.
ii. Justice Khosa, 64, has been a senior Justice of the Supreme Court since December 2016.
iii. He has also served as an advocate in the Lahore High Court and Supreme Court.
Pakistan:
♦ Capital: Islamabad.
♦ Currency: Pakistani rupee.

PayU India CEO Amrish Rau joined parent company Naspers as head of financial technology
On January 4, 2019, PayU India’s CEO Amrish Rau joined as the head of financial technology partnerships and investments for Naspers’ fintech business. Nasper is South African parent of PayU.
i. Rau will continue to report to Laurent le Moal the chief executive of PayU, which is headquartered in the Netherlands.
ii. He joined PayU after Citrus Pay was acquired by PayU in 2016 for $130 million in cash.
PayU:
♦ Headquarters: Netherlands.
PayU India:
♦ Headquarters: Gurgaon, Haryana. 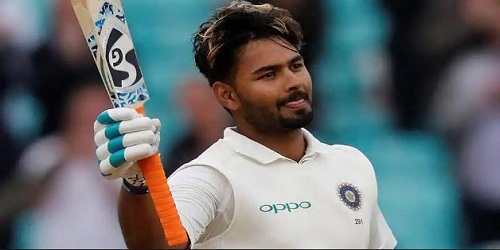 He achieved the feat by scoring 193 runs of 373 deliveries on the 2nd day of 4th Test Match against Australia in Sydney.

World Braille Day celebrated on January 4
On 4th January 2019, United Nations observed the first official World Braille Day remembering the birth anniversary of Louis Braille who was the inventor of Braille for the people with visual disabilities. Key Points
i. World Braille day is observed annually on 4th January to raise awareness on the importance of Braille for approximately 1.3 billion people living with some form of distance or near vision impairment.
ii. Louis Braille was born on 4th January 1809 in France and he lost his vision at the age of 3.
iii. On the occasion of World Braille Day, half part of evening bulletin of All India Radio – Ahmedabad was read by a Visually challenged primary school teacher, Mr. Krishnabhai Thakar.
About United Nations
♦ Headquarters: New York, USA
♦ Secretary General: Antonio Guterres