We are here for you to provide the important Current Affairs February 6 2019, which have unique updates of all daily events from all newspapers such as The Hindu, The Economic Times, PIB, Times of India, PTI, Indian Express, Business Standard and all Government official websites. 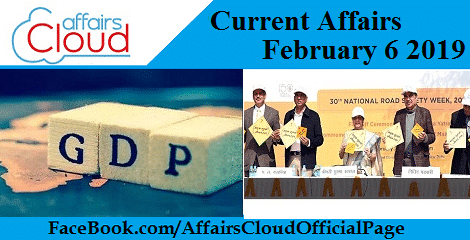 Government notifies Rules to allow women to work in mines
Ministry of Union Labour and Employment on 4th Feb has allowed women to work in mines, both in opencast and underground, during the day and night, as part of the efforts to build more opportunities for women. This decision has been taken, in line with the recommendations of the section 12 committee constituted under Mines act, 1952. Key Points
i.Government has exercised the power conferred under sub-section (1) of section 83 on the Mines Act, 1952 (35 of 1952) to make this happen.
ii.Earlier, section 46 of the Mines Act, 1952 restricts the employment of women in underground and opencast mines.
Key rules for women employed in any mine above ground
i.Women will be deployed on work between 7 pm and 6 am, if working in any mine above ground.
ii.She will be deployed on work between 6 am and 7 pm, if working in any mine below ground.
iii.She should be provided with adequate facilities and safeguards.
iv.She should be deployed in a group of not less than three in a shift. 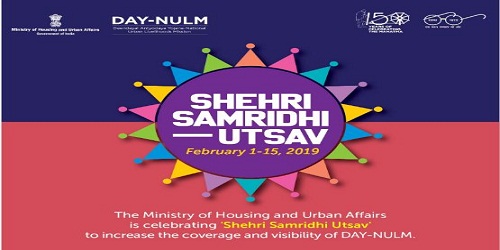 About Shehri Samridhi Utsav
i. It is the National Exhibition cum sale of Self Help Group products and National Street Food Festival.
ii. The event will provide access of Self-Help Group (SHG) members to the other government schemes.
Related Points:
Hardeep Singh Puri is the Minister of State in  of the Ministry of Housing and Urban Affairs.
Deen Dayal Upadhyaya Antyodaya Yojana (DDU-AY)
i.It is a government scheme to provide skill training to poor in rural and urban India as per international standards.
ii.Initially the scheme was launched as Swarnajayanti Gram Swarozgar Yojana (SGSY) in 1999.
iii.SGSY was renamed as National Rural Livelihood Mission in 2011 and then merged into DDU-AY. 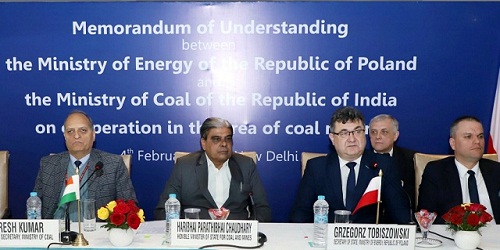 6th meeting of Mission Steering Group of National Health Mission was held in NewDelhi
On 2nd February 2019, Shri Ashwini Kumar Choubey, Minister of State for Health and Family Welfare chaired the 6th meeting of the Mission Steering Group of the National Health Mission (NHM) in New Delhi.
Key Points:
i. The meeting highlighted that the centre is providing funds to all the 36 states/UTs to provide essential drugs free of cost in public health facilities and to set up IT-backed systems for drug procurement and quality assurance.
ii. Various agenda points of the meeting included enhancement of reach, outlay and facilities within components of the NHM, Prevention and Control of Viral Hepatitis, Immunization, Comprehensive Primary Health Care, Non-Communicable Diseases (NCDs).
About Ministry of Health and Family Welfare:
♦ Union Minister: Jagat Prakash Nadda
♦ Minister of State: Anupriya Patel, Ashwini Kumar Choubey

5-Member Committee to Promote Dairy Farming was set up by Punjab to Boost Farmers Income
On 5th February 2019, Punjab government headed by Chief Minister Captain Amarinder Singh decided to constitute a 5 members high-powered committee to prepare a comprehensive action plan for boosting the dairy sector with the aim of supplementing the income of farmers in a result-oriented manner.
Key Points:
i. The committee will be comprised of including Chairman State Farmers Commission, Director Animal Husbandry, Director Dairy Development, a representative of Guru Angad Dev Veterinary and Animal Sciences University (GADVASU).
ii. The role of the committee will be to recommend measures for promoting diversification of agriculture with the aim of enhancing farmers’ income from allied sources.
About Punjab:
♦ Chief Minister: Amarinder Singh
♦ Governor: V.P. Singh Badnore
♦ Capital: Chandigarh
About Israel:
♦ Capital: Jerusalem
♦ Currency:  Israeli new shekel
♦ Prime minister: Benjamin Netanyahu

World heritage centre to be set up at Mayapur in West Bengal
International Society for Krishna Consciousness (ISKCON) has decided to set up a “World Heritage Centre” housing “spiritual camps” of 45 countries, at its headquarter, Mayapur in Nadia district of West Bengal. The camp of each country would reflect its culture, dress, lifestyle, food and ambiance.
The estimated cost of this project is 3000 crores.

Words Count Festival 2019 was held in Pune
On February 4,2019, second edition of World Count festival 2019 was held in Pune, Maharashtra, with an aim to bring together speakers from several socio-political spheres and share their insights on various issues.
Important Facts:
i. The Festival, was hosted by the award -winning screenwriter, author and columnist Advita Kala.
ii. Pavan Kumar Verma,A career diplomat and famous writer was honored with first Word Smith Award 2019 for his contribution in Indian Literature.
iii. During this festival,Ahmedabad Textile Industry Research Association (ATIRA)’s new composite carbon fabric which is lightweight, durable, and high heat resistance and which is now  replacing metal parts of satellites and is of low cost was launched by Union Textile Minister Smriti Irani.
About Maharashtra
♦ Capital: Mumbai
♦ Governor: C. Vidyasagar Rao
♦ Chief minister: Devendra Fadnavis

Government forecasted 7.5 per cent GDP growth in FY20
On 5th February 2019, the Economic Affairs Secretary, Subhash Chandra Garg said that the finance ministry is expecting the GDP growth to reach 7.5 per cent in 2019-20 from 7.2 per cent projected for the current fiscal. Key Points:
i. The Government is expecting a nominal growth of 11.5 per cent (for 2019-20) and inflation to remain at 4 per cent.
ii. The annual average GDP growth during the last five years is higher than the growth achieved by any government since economic reforms began in 1991.
iii. In 2016-17, the year in which the demonetisation of high-denomination currency notes of Rs 500 and Rs 1,000 took place, the GDP growth rate was 8.2 per cent.
About Ministry of Finance:
♦ Minister: Arun Jaitley
♦ Minister of State: P. Radhakrishnan, Shiv Pratap Shukla

Centre to constitute working group to resolve startup’s angel tax issue
Government is all set to form a small working group to observe the matter of angel tax, as profiled by startups.
Key Points
i. The decision has been taken on the lines of concerns, raised by startups on tax payment on angel funds under section 56(2) (viib) of I-T Act.
ii. Different surveys showed that more than 2,000 startups which had been given funding from investor angel, private and venture capital funds have received notices under the angel tax.
Who is Angel investor?
An affluent person who invests his money as capital for business start-up in exchange for an ownership stake in the company.

P.S.Krishnan received K.Veeramani Award for Social Justice in 2018
On February 4,2019, P.S. Krishnan, former Secretary of Government of India,was entitled with  K.Veeramani Award for Social Justice 2018 in New Delhi.
i. Mr.V.P.Singh, former Prime Minister of India, was the first recipient of the K veeramani award.
ii. Social Exclusion and Justice in India, Empowering Dalits for Empowering India: A Road-map are some of books written by P S Krishnan.

Mashoka 5 – Mobile App launched for booking of Bungalow No.5, in New Delhi
On February 4,2019,Mashoka5, the mobile app for booking of Bungalow No.5,New Delhi was launched by Minister of State for Housing & Urban Affairs Shri Hardeep S Puri.
i. The Application will help an applicant to complete the entire booking process from anywhere and at any time, by using a mobile phone.
About Bungalow No.5:
5 Ashoka Road bungalow is a popular wedding venue. It is maintained by the housing and urban affairs ministry. 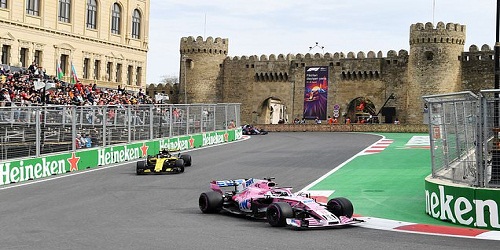 i. This is the first renewal of 2019, the organizers from Belgium, China, Germany, Japan and Singapore has already extended their deals over the previous two years.
ii. This renewal will help the organizers of Azebaijan GP to maximize commercial revenues through new sponsorship approach and enhanced fan activities.

Senior Congress leader Harihar Karan died
On February 4, 2019,Former MLA and senior Congress leader Harihar Karan passed away at a age of 72 due to  Septicemia disease in Bhubaneswar.
i. He was elected as a six-time MLA from Daspalla constituency in Nayagarh district, Karan was elected for the first time in 1974.
ii. He was also the Health and Family Welfare minister in the odisha government in 1980.
iii. Harihar Karan was also the chairperson of the disciplinary committee of the Odisha Pradesh Congress Committee (OPCC) in 2013 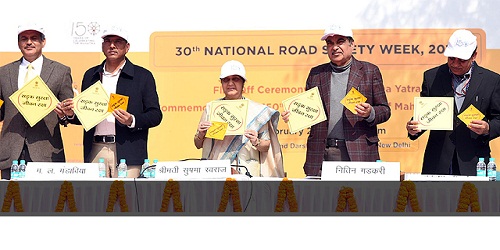 The theme of the 30th National Road Safety Week is “Sadak Suraksha-Jeevan Raksha”.
Key Points:
i. A motor car rally called Suraksha Yatra was flagged off as a part of an event to launch the 30th National Road Safety Week. The rally will also commemorate the 150th Birth Anniversary of Mahatma Gandhi.
ii. The motor rally will cover around 7250 km and will travel through those places in India, Bangladesh and Myanmar which are historically associated with Gandhiji. Conclusion of the rally will take place at Yangon in Myanmar on the 24th February 2019.
iii. The aim of the event is to generate awareness and sensitizing people about safe road usage.
iv. During the event a Dash Board for Road Accident Data of India and states where people can access road accident related data and other information was launched. The dashboard will be available on the website of the Road Ministry.
v. To underline its commitment and support for promoting safety on Indian roads, the Society of Indian Automobile Manufacturers (SIAM) has declared 2019 as the Year of Road Safety.
vi. On the occasion, Uber in collaboration with Amar Chitra Katha launched a set of comic books called Swachha Safar and Surakshit Yatra which are aimed at creating awareness on the issue among children.
vii. Besides a 9-Month long championship on road safety issues for schools and colleges across India called iSAFE was also launched. A total of 5000 colleges are expected to participate this year and the best colleges among them will be awarded prizes worth Rs 25 lakhs as part of the championship.
viii. Furthermore Retro Reflective Stickers which carried the message of road safety Sadak Suraksha Jeevan Raksha were also launched on the occasion. All the new vehicles will henceforth come with these stickers according to the assurance provided by Automobile manufacturers.
About Ministry of Road Transport & Highways:
♦ Minister: Shri Nitin Gadkari
♦ Minister of State: Shri Mansukh L Mandavia